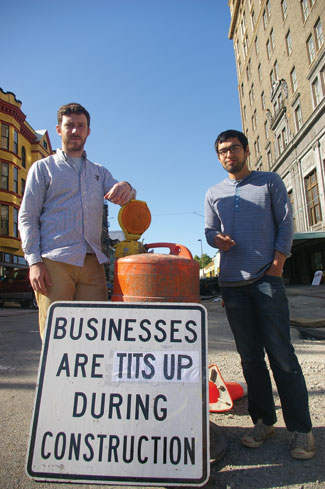 The purist ethic of the Helm Gallery dictated: if you say it’s art, it’s art.

Downtown Tacoma’s 700 block is a ghost town. The asphalt is gone. The sidewalks are gone. The shoppers and workers are gone. Graders and dozers, backhoes and rollers snooze in the five o’clock sun.

And sometime around the beginning of June, the Helm Gallery will vanish too. Its final show — featuring Gretchen Bennett, Jenny Heishman, Heide Hinrichs and Matthew Offenbacher — seems a fitting epitaph. Crude, ambiguous sculptures litter the floor: carpet pad on wooden boxes, rubber ball guts and bike tire tubes, a flattened fragment of a disco ball, stuff stapled to stuff. Most of the walls are bare, most of the floor space vacant.

In the office, amidst a smaller collage of papers, bottles, cans, cups and torn-open half-racks of PBR beer, Helm co-owner Sean Alexander is dressed like a logger, or a grunge holdover. He sports a three-day beard. He steps past a toy piano with an open laptop on its lid to greet me, clutching a cup of coffee and a pack of Pall Malls.

What’s the Helm’s philosophy? “One hundred percent punk,” says Alexander. “I’m not going to tell an artist what to sell. It’s about giving an artist the space to do their thing.”

I ask about the current show, which the artists describe as devoted to “people who arrive late on the scene, after the beginning, after the abundance, after the traumatic event, after everything’s been said and done, after, even, the end.”

“I don’t know.” He shrugs. “These guys are really academic.” Academic art’s not his thing. Neither is talking to the press. He’s good at fending off interview requests. But as we go outside for a smoke, the story starts to unfold. It sort of tells itself, as Alexander rants.

Alexander rants differently than most. He doesn’t shout or shake his fist. He’s quiet and gentle and, well, nice. He’s thought a lot about art and artists and galleries and the press, and how they’re all in cahoots in this aspirant, small-city scene.

“You know what bonobos are?” he asks. “They’re this tribe of monkeys that basically sit around and give each other hand jobs all day.”

“Have you read Babbitt by Sinclair Lewis?” he adds.

I confess that I haven’t read the satirical classic about middle-class American life.

“Babbitt never says anything bad about his town. But he’s also not willing to look at the bad parts of his character. Babbitt is very Tacoma.”

Alexander is very Tacoma too, in his own Tacoma way. “He has a very particular view of the world,” his friend and business partner, Peter Lynn, tells me via email. “But it’s an honest one.”

And the Helm was an honest gallery, a fact both men are proud of. They never set out to make money (though, privately, they sometimes wish they had). They set out to bring something new to the scene. New art. New music. A new, purer aesthetic. (Alexander, a gifted artist himself, does the gallery’s design work by hand.) And, most of all, a new ethic.

When the Helm was desperately broke and the car company Scion offered five hundred dollars to put their name on Helm promotions, Alexander was horrified. “I said, ‘No way. We’re not doing advertising. We’re not doing Art presented by Scion.’”

He and Lynn are proud they didn’t cave. Still, that five hundred dollars is hard to shake off. They’re paying the rent entirely out of pocket these days, and Lynn’s had a tough time meeting his mortgage. Though they don’t say it, one gets the feeling they’re looking forward to the end of the place.

For those who said the Helm would never last . . . good call. But don’t call the Helm a failure — not yet. The Helm was never about lasting. Alexander has big plans for his post-Helm future. The Squeak and Squawk Music Festival, which the Helm copresented with the New Frontier Lounge last October, will go on. And he wants to start an artists’ co-op on his mom’s property out in Longbranch.

He’s telling me about the Longbranch barn studio, the living spaces, the gardens and collaborative sculpture he envisions, when some friends walk into the gallery. Among them are Trevor Dickson of the band the Nightgowns and Micah Tucker They’re here to load Tucker’s paintings from the penultimate Helm show into a pickup.

Later, as Alexander locks the door, we gather on the gravel where the sidewalk used to be. Dickson points to a second-story window across the street. Two women in negligees are leaning out.

“Is that a brothel?” someone asks.

Alexander shakes my hand, turns and rides off into the not-quite-sunset.

The Kindness of Strangers

(September – October 2007)
Alexander and Peter Lynn contacted artists blindly over the Internet; almost a hundred from around the world donated their work to help get the upstart gallery off the ground. Just because.

(October 16 – 20, 2008)
God’s gift to South Sound indie music, the fest brought local, regional and national names — some of them famous — together in the unlikely location of Tacoma.

This Is a Time Machine

(January – February 2009)
Many if not most gallery owners demand to know exactly what artists are up to before scheduling a show. In a typical death-defying leap of faith, Helm gave Tacoma’s Nicholas Nyland and Seattle’s Ellen Ito this show even though the artists refused for months to tell them what the show was about — a hand-painted cardboard time machine with crocheted Afghan-rug ottomans inside. Another title might have been “Art That Won’t Sell.”

Truths We Forgot to Lie About

(February – March 2009)
An installation by Tacoma artists Eli Hansen (also a bookbinder and glassmaker) and Joey Piecuch (also a chemist/botanist) that attempted to answer the perennial question: how come the Northwest has so many moonshiners, meth cookers, serial killers and craft artists? A good, hard look at Tacoma’s weird soul.