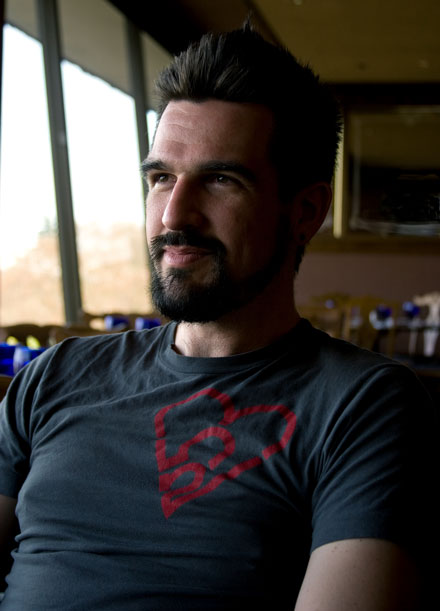 Fulcrum Gallery owner/DJ/troublemaker Oliver Doriss takes our reporter to happy hour and talks about what he used to wish for.

I’m in the entryway of Stanley & Seafort’s Steak, Chop and Fish House. Elvis Costello’s “Every Day I Write the Book” is playing through an invisible sound system as I look for my lunch date. Oliver Doriss is not late. Brown-haired, six-foot-four, thirty-four years old, he has a plan already in place.

“Let’s check out the view before we go in,” says Doriss, who wears what looks like motorcycle pants though he’s driven up to the ridge-top restaurant in a Scirocco. We stand on the patio and look down on the Dome and the Sound. Beyond the freeway Doriss points out the Murray Morgan Bridge, shut down since 2007 after it was declared unsafe.

“There are peregrine falcons that live above it, so there are dead pigeons everywhere.” He smiles at me mischievously. “It’s littered with pigeon carcasses!”

The next day when I walk the bridge I don’t see any pigeons or falcons. Maybe they’re hiding?

Or maybe they’re another of Doriss’s inventions, a swirl of projects and identities that include his deejay name (Broam), his neighborhood moniker (the Viceroy of Hilltop), his ironic handle (the glassblower Formerly Known as Oliver Doriss) and the “Citizen 253” ID he carries in his wallet. He sells these IDs for fifteen bucks at his year-old studio and commercial space, Fulcrum Gallery, and according to Doriss, they’ve become a sort of currency at certain Tacoma shops.

“Tacoma is the perfect size where you can get up a lot of mayhem, but small enough where you won’t get in trouble,” says Doriss, sipping a pint of Moose Drool ale in the Stanley and Seafort’s bar and, after a serious five-minute consideration of the menu (he usually comes here at happy hour), deciding on the grilled mahi-mahi. A cheerful waitress brings our food, and Doriss eats some of the sweet-potato fries that come with my turkey-and-bacon club. The restaurant is run by a national corporation called Restaurants Unlimited, which owns properties from Dallas to Anchorage. It’s the kind of place you feel like you’ve been to before, in another city, with the exception of the view, which is all Tacoma.

Doriss has a lot of love for Tacoma and the art that’s made here. A 1996 graduate of the Massachusetts College of Art, he says Tacoma is better than New York, “where you’d be barely hanging on,” and better than Seattle, “which is all blown out.” It’s best because he can “make this town into one I want to live in. And this area is filthy with glass. There’s so much potential.”

Realizing that potential means showing his own glass art — he was part of the recent group show Look Forward at Traver Gallery. It also means showing the art of others at Fulcrum — the evening prior to our interview, he hosted an opening of new prints by Lance Kagey. Doriss also does work at the Museum of Glass and at M Space, and in between rides around town on a Kool-Aid orange, banana-seated Schwinn.

Doriss talks about a show he saw in Corning, New York, home of the great glass factories Corning and Steuben. This show centered on the theme “lunch break.” “Traditionally in a factory your lunch break was the time when you could make stuff for your family,” Doriss says. “Then you went back to work and made your production item.” As he sees it, art happens in the downtimes, the breaks. “As a glassworker myself, I always align myself with a shop, so I have fringe benefits.”

Benefits were the name of the game when, like many talented young glass artists, he found a gig working for the Chihuly empire. For five years he made “those ruffly Chihuly shapes.” He is grateful for the opportunity. “How else,” he asks, “does someone learn to deal with fifteen, twenty pounds of glass, to make these larger-than-life forms?”

We’re back on the patio, looking at the water. “It’s funny,” he says, “ever since I was about ten, I wanted to have a big commercial building that I could ride a bike around in. Now, I just have to figure out how to make everything run.”

With that he makes his exit, no time for dessert; he’s spinning tonight at Maxwell’s, and he needs to get back to Fulcrum to make sure his new assistant is up to speed.