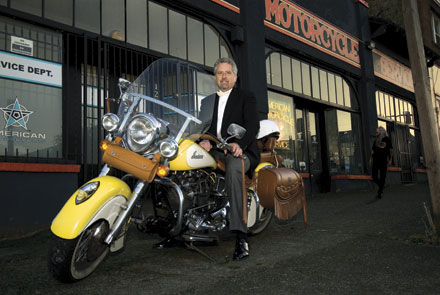 Dennis James’s crusade to save silent film music is taking him all over the world.

In 1960, when Dennis James was ten years old, Life magazine published a photo that came to symbolize the end of an era. It showed an aging Gloria Swanson, a beloved siren of the silver screen, wearing a black gown and draped in a red feather boa. She stood, arms outstretched in dramatic lament, amid the fresh ruins of New York’s fabled Roxy Theatre during its demolition. James still recalls the shock he felt at seeing this image of the past being bulldozed. “Here they were taking down the Roxy, the most ornate and greatest of all the movie palaces. And I was coming of age when this sort of thing was happening!”

In a sense, James has dedicated his colorful and strikingly idiosyncratic career as a musician to reversing the damage inflicted by the wrecking ball that brought down the Roxy. He’s a rebel, a dominant figure in the silent film revival movement; few have done as much as he to drive the resurgence of screenings with authentic live music. James is a theatre organist, among various other musical specialties, who marries encyclopedic knowledge of the silent film era with imaginative and lively musicianship. His performances have such gusto that he’s been able to parlay what began as ad hoc appearances four decades ago into an international profile as an artist of special and recherché talents.

His bookings for the next month or two, for example, will find him at the Washington Center for the Performing Arts in Olympia; in South Carolina; and in Vienna performing at the Konzerthaus.  In September, between his weekly appearances at Seattle’s Paramount Theatre playing for a Charlie Chaplin festival, James shuttled back and forth to other screenings in the U.S. and had a date at the Coliseum in Rome for a performance of the symphonic score to Abel Gance’s silent masterpiece, Napoleon.

To anchor this itinerant lifestyle — he’s often on the road for months at a time — James has lived in Tacoma since 2002. A loft downtown near the Washington StateHistory Museum provides space for his extensive collection of silent film scores and what he calls his “musica curiosa” — exotic instruments.  He owns, among many other objects, theremins from the ’20s (the early electronic instrument famous for spooky sound effects in Hitchcock films such as Spellbound and lesser horror flicks), a phonoviolin, a gem roller organ and a sparkling array of glass instruments — another of his passions — such as cloud chamber bowls and glass harmonicas.

James is both a musician and a collector, the two aspects of his personality reinforcing one another and underscoring his choice of hometown. “I’m an antiques person and one of the things that drew me to Tacoma is the antiques scene here,” he says. “Another thing is the fact that Tacoma didn’t have the resources to knock itself down during the era of urban renewal. I’m very attracted to the craftsman-era homes here.”

James has a motto that sums up his relationship to his surroundings: “Live in a way that matches what you do.” Before moving to the Northwest, James proudly resided in the home of a former movie star in San Diego. “She had retired and her husband, a dentist, tempted her out of Hollywood by building a house that looked just like a movie star’s mansion. Everything in the house was original, down to the little telephone shelf. I was in heaven.”

James is originally from the suburbs of Philadelphia, perhaps not the most likely place to develop a steadfast love for silent movies, an art form that was already fading from memory when he was growing up. “In the ’50s, these things were still part of living memory,” he recalls, “but you’d see old silent movies being shown on TV in a kind of last gasp. I was always interested in the culture from 1910 to 1930 in a generalized way. I enjoyed watching the movies knowing that the inauthentic music that accompanied them on TV was just bad.”

In the early ’60s James got hooked on  At the Turn of the Century, a weekly series on public television hosted by the late Max Morath, a performer and music historian known as “The Ragtime Man.” “He became the model for what I do,” says James. “Here was a cultural historian who was both entertaining and educational at the same time.” Other influences include the legendary silent film theatre organist Gaylord “Flicker Fingers” Carter and the composer P.D.Q. Bach, the fictional alter ego of Peter Schickele, whose “works” irreverently spoof stuffy music academics.

James went on to study organ performance at the renowned Indiana University School of Music. “They accepted anybody back then,” he recalls. “But I survived. I had been a church mouse kind of kid, terribly shy. The worst candidate to be a performer you could imagine.”

Nevertheless, while in college, James cultivated his daring — and quirky — side and launched his unlikely career. He decided on a whim (“a comic-relief moment,” he calls it) to play organ accompaniment to a showing of the 1925 Phantom of the Opera. It was Halloween: over four thousand people showed up and a star was born. “I’d printed out my own tickets by hand. Suddenly I was able to pay off a year of school. NPR called for an interview and I started touring.”

Eventually James appeared with celebrities including Fay Wray, Ginger Rogers, Bob Hope and Vincent Price. He toured for several years with Lillian Gish, who introduced her 1926 film version of La bohème. In the silent era, copyright laws had prevented use of Puccini’s music. James revived the film to acclaim with the originally intended accompaniment gloriously restored.

James evolved into one of the leading theatre pipe organists by somehow conjuring up music that had mostly disappeared. Consensus among film historians holds that while around 20 percent of films of the silent era have survived, the scores to fewer than 1 percent still exist today. Nevertheless, explains James, “With a series of gradually made choices, I can address any silent film with a validity that satisfies me and convinces others.” His remarkable historical reconstructions recall the heyday of silent films when both composers and musicians readily found employment. “A city like Tacoma, for example, had something like eight pipe organ-equipped downtown theatres. And each theatre was known for a different style of presentation.” 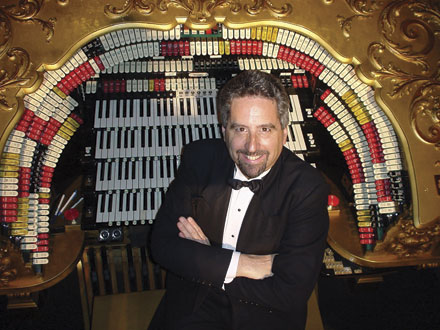 It’s a common misconception, James points out, that in the silent film era accompanists simply “made it up” as the movie went along. In fact, improvisation was the exception. “There was published, written music, assembled in all different ways, from full orchestra to solo organ or piano,” he says.

His approach to reviving the music for a given film is studied and systematic. “If the original score exists, you play it and modify according to necessity,” James explains. “I will always address historical material I can get my hands on. I also do lots of secondary research in newspapers and magazines and interviews with any surviving parties. So I can create a correct historical score from one of these possibilities: an original score; fragments of an original and other similar scores of the period; or synthesizing material for a score that doesn’t exist.”

James conveys a sense of sheer fun in his performances that makes what he does seem easy — as if he’s reliving that fateful Halloween, playing the Phantom for an ecstatic audience again and again. But that interpretation overlooks his formidable knowledge. The real key to the Dennis James phenomenon is his uncanny ability to combine razzle-dazzle performance with an archivist’s respect for conservation. “My particular approach,” he says, “is revival and preservation arts. You go much further than simply ripping off the past to use it in the present. There’s a kind of moral stance you’re helping to conserve as well.”

James has earned the respect and admiration of his colleagues in the field. “He possesses a rare combination of showmanship and scholarship that truly sets him apart,” according to Margaret Parsons, who heads the National Gallery of Art’s film department. “The recent and rapid revival of interest in silent film music seems both extraordinary and exciting. New accompanists to this burgeoning field, however, can only dream of attaining Dennis’s level.”

Anyone who has seen James in action — whether as a solo accompanist at the restored console of a mighty Wurlitzer theatre organ or joined by a full symphony orchestra for a live presentation of a silent film — knows that his appearances typically include witty and richly informative introductions to the film, its actors and its historical context, plus plenty of fun gossip. James is a thoroughly engaging raconteur, his excited speech frequently punctuated by bursts of laughter. He amuses not only his audience but himself. And he gives the strong impression that nothing has ever escaped from his capacious memory.

Tom Iovanne, executive director of the Washington Center for the Performing Arts in Olympia, where James often performs, observes that “he’s not only a fabulous organist, he brings a wealth of knowledge. He talks with the audience and fills them in on nuances, telling stories about the film. He really brings people into the silent movies in a unique way.”

James is undoubtedly among the greatest living silent movie aesthetes. A rarefied point of view also informs his fascination with exotic instruments such as the theremin and the glass harmonica, an instrument invented by Benjamin Franklin and comprising a series of glasses containing different levels of water. Sound is produced by running a moistened finger around the rims of the glasses. James has performed Mozart on the glass harmonica and film scores by Hollywood composer Marco Beltrami.

James’s path as a performer has been unpredictable. He eschews the traditional show business system, doubling as his own agent and promoter. He has performed on every important surviving theatre organ in the world, appeared with many leading symphony orchestras, and played at Radio City Music Hall among most other celebrated movie palaces. His collaborations extend from high culture to pop, from Philip Glass to Penn and Teller.

An especially unlikely pairing, perhaps, found him accompanying legendary pop diva Linda Ronstadt. She invited him to play glass harmonica on an album she produced in 2002 called Cristal: Glass Music through the Ages. “Working with Dennis and his glass instruments,” Ronstadt says, “gave me an entirely new musical setting to revel in. The range of dynamics and expression is surprisingly rich and the textures are deliciously flattering to the voice.”

“Musica curiosa” is maybe not only the way to describe James’s collection of exotic instruments, but also a fitting characterization of his temperament and achievement.

“My collection,” he acknowledges, “is the byproduct of my curiosity and the inventiveness I’ve brought to doing things — to functioning creatively within the culture.” His passions are uniquely defined: he is a fiercely committed human bulwark against the rapidly disappearing past of silent movies and other treasures. He can’t quite explain why he does the work of a rebel preservationist, but he does it nonetheless. James lives, he says, by a philosophy espoused by author-radio savior Garrison Keillor: “If you don’t know what’s going on, consider it comedy — and figure that it’s all being done just for you.”