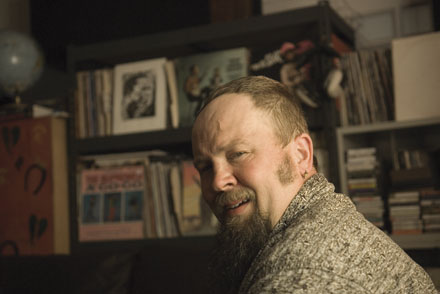 Sculptor Otto Youngers is achieving international recognition for his large-scale installations and earning respect for planting trees to ensure the sustainability of his materials.

Otto Youngers says he markets his artwork like a vacuum salesman. When rejected by one gallery, he simply knocks on the next door. No angst or bruised ego.

Lately he’s had good luck. In artist speak that translates to exhibits of new work in Los Angeles, Thailand and Japan. And a humongous public art installation in Spokane. 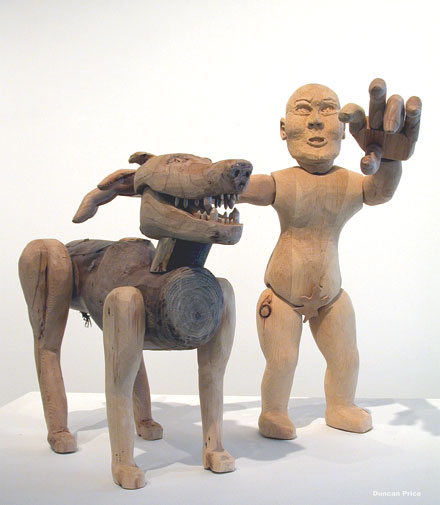 Wood Works: Often the titles of Youngers’ sculptures tell the whole story, as in 42-Year-Old Babyman and His Dog “Log” Are Off to See the Genome Wizard About Chemical Inhibitors and Other Abnormalities.

Youngers’ ideas spew from a fertile mind. They tumble from his mouth on fast forward. Consider the titles of a few pieces: First ?Church of High Heels and Low Morals; He Has His Father’s Brain; Prometheus Decepticon and the Great Dog Seal of the American ?Swing Bird of Misunderstanding. 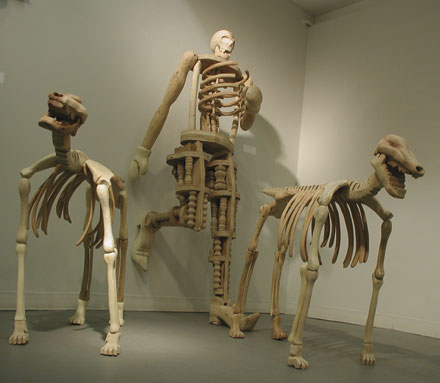 A pugilist is up against the wall in Mercury and Arsenic, protected by his mythic beasts.

Youngers lives and works in a four-building compound, surrounded by a locked wooden fence, in a working-class South Tacoma neighborhood. Its core, a 1925 yellow frame bungalow, houses Youngers, his wife, Amy McBride, their son Oliver and two black mutts, Iris and Zeus. 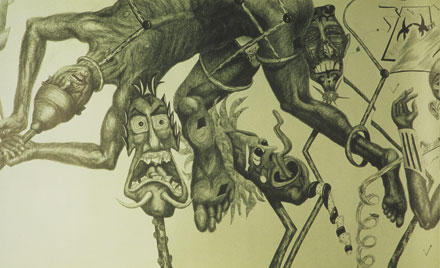 From Right to Left is a detail from a thirty-foot-long epic drawing.

The environment reflects its owner, a blue-eyed, round-bellied, burly guy clad in khaki Carhartts, sturdy work boots, a Thai floral print shirt and a bandana. With a ragged goatee, a green-jeweled earring, a cell phone and a Stanley tape measure hanging from pant loops, he’s not mainstream America. Still, it’s a far cry from the eight-inch-high Mohawk of earlier times.

Youngers grew up in Kansas, followed his father to Salt Lake City where he attended some college, then did a stint in Seattle. He returned to the heartland to complete his Bachelor of Fine Arts at the University of Kansas, where Shimomura teaches. Later, he received an MFA from the San Francisco Art Institute. “As an art student Otto had this unforgettable energy like a freight train running away on the track,” says Shimomura.

Shimomura viewed Youngers, who studied sculpture and performance art, as prematurely cynical. But Youngers had experienced life’s ups and downs: he left a bad home situation at sixteen and supported himself through school with jobs and soccer scholarships.

“He loved being the outcast,” Shimomura recalls. “It was exactly the kind of thing he fed off of. Art students often have in their DNA the imperative to behave like that. Otto just carried it to a higher degree. He had the vision, conviction and energy to keep banging away at the work. When I think of him, it puts a smile on my face because it was one of the most positive experiences I have had with a student in thirty-five years of teaching.” 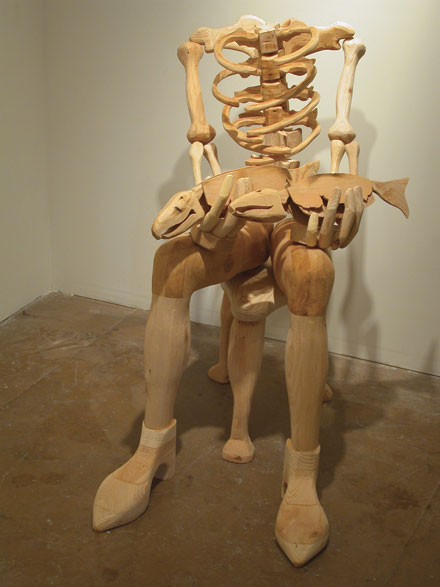 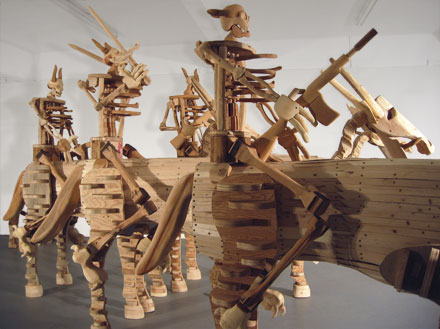 Okay, back down to earth – and Youngers’ relationship to it. Clear-cutting and diminishing resources trouble him, so he sculpts with reclaimed and recycled wood. And he plants trees nurtured from seeds – over 150 of them so far in his half-acre arboretum-yard. “The only way forests will come back is for people to turn urban areas back into forests,” he explains. Youngers and McBride grow fruit trees and a vegetable garden. The rest of their property remains wild. From the yard, a stairway descends to the home’s basement, an underground bunker that’s Youngers’ think tank and his wife’s metals and jewelry studio. McBride, arts administrator for the city of Tacoma and a contributor to City Arts, makes less art now than she used to. Youngers covers that territory and also, according to his wife, does the lion’s share of the housework. “He even redoes the dishes I do badly,” says McBride, noting that Youngers is gentle, loving and a great father.

McBride’s public role places some constraints on Youngers’ ability to compete for local public arts commissions. He has had shows at Kittredge Gallery and the defunct Commencement Art Gallery, has many pieces in regional museums and has won Artist Trust awards.

In 2001 he received a private commission from the Oakland Madrona Business District in Tacoma. “We had funds to make a derelict property at Center and Tyler into a pocket park,” explains Ron Michaels, a member of the Oakland Madrona Business Council. “We wanted a sculpture to represent our wood-mill past and present-day home improvement businesses.” Youngers’ installation, called Working, comprising a colorful cog and eight-foot-tall hand tool-adorned gateway and bench, fit the bill.

In late August Youngers installed his newest piece of public art, Dewey Decimal’s Delegation, at Ridgeview Elementary School in Spokane. Based on the notion that art is as multilayered as literature, the elaborate installation aims to capture the imagination and spark the intellectual curiosity of K-6 students. Youngers knows fantasy well. As an only child, he would gather his puppet friends and go on forest journeys where he made tree houses, forts and art.

“In the planning process,” says Ridgeview principal Kathy Williams, “we talked about how we wanted to be kid-oriented and bring in whimsy.” Originally seeking an entry piece for the new, brightly hued school, the Ridgeview art committee learned of Youngers through the Washington State Arts Commission’s Art in Public Places program. When he met with them and jabbered about his seven-year-old son, they were sold.

Youngers filled both the entry and the school library with charming storybook ideas. Kids in summer school went wild over the giant potato riding a bike in midair. “There’s a manic quality to what Otto talks about and makes,” says Esther Luttikhuizen, project manager for Art in Public Places. “The school community was smitten by the whimsical quality of what he created. This group just flipped over it.”

“We got what we expected and then some,” says Williams. The installation begins at Ridgeview’s entry with a four-by-five-foot wood pop-up book topped by a moose head. Youngers doesn’t stop there. Over one hundred icons of childhood and Pacific Northwest culture dangle along sixty feet of the ceiling, gliding past two more wall-mounted pop-up books. 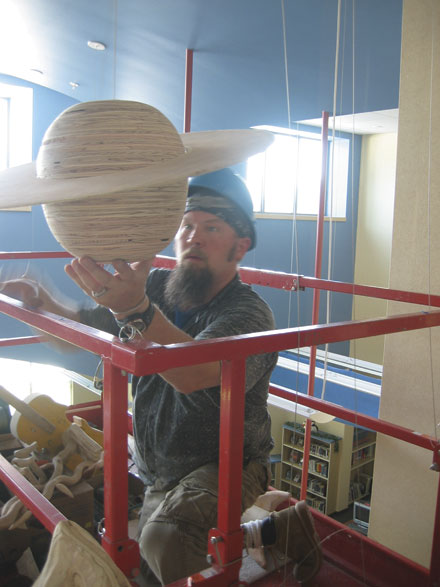 String Theory: The artist installs the planet Saturn, one of a hundred elements in Dewey Decimal’s Delegation.

An eight-foot dragon grins as fish, birds, shoes, butterflies, molecules, asparagus, winged violins, the planet Saturn, pine cones, pencils and a Buck Rogers spaceship migrate into the library. There, the grand finale pop-up book reigns with Mother Nature emerging from its pages, slyly gazing towards the book stacks and away from the library’s computer terminals.

Youngers considers the moose and Mother Nature figureheads as the front and back of a ship of learning. The pop-up books are portals to the world of literature he devoured as a child seeking escape in the Derby, Kansas, library. He still reads voraciously, to his son and to discover source material for his art. 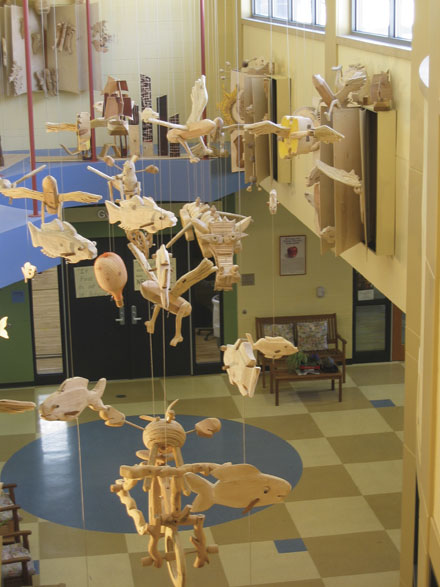 “When Otto worked as a sculpture instructor at Bellevue Community College, he was inspirational – so well versed in art, literature and politics,” recalls Cheryl Leo-Gwin, head of arts programs at BCC. “The students loved him.” Youngers, she says, is incredibly articulate about his work and a rising star.

Youngers’ full-time art making began only last year. Before that, he held construction, landscaping and art-installation jobs to pay bills. For a time he was art curator at Sea-Tac airport, where artist Nancy Blum found him an exceptional advocate for her work. Youngers installed Blum’s sculpted resin flowers in Terminal C and got it exactly right. “I didn’t have to ask anything,” she says, “he knew so intimately the needs of an artist.”

Lydia Takeshita, founder and director of LA Artcore, a nonprofit Los Angeles gallery, also appreciates Youngers’ sensibility and energy. One day he walked into her gallery unannounced and showed her photos of his work. She offered a show.

“When I see potential and promise,” Takeshita says, “I encourage the artist. To be an artist is a hard trip, but it’s an important part of our civilization.” Takeshita organizes cultural exchanges to foster artists’ growth. Through her, Youngers met Dr. Kamol Tassananchalee, a native of Thailand and president of the Thai Art Council USA. “We like that he collects old wood and grows trees to replace the wood,” Tassananchalee says, “and we like his ideas, humor and easy personality.” All reasons why Youngers will return to Thailand for the fourth time next February to teach at Ching Rai University in the northern part of the country and at another university in Bangkok.

In Thailand Youngers discovered he could sculpt without an arsenal of electric tools. He’s absorbed Thailand’s profusion of exotic plants, insects and spiders and the intricacy of its traditional and contemporary art. He says he’s awed by the grace of the Thai people. Of course it helps that his work fascinates them.

Youngers’ Future Feast, a ten-foot dragon skeleton built with his Bangkok art students, is currently traveling in Thailand. Arrayed across a white-clothed table with two place settings, the figure is replete with historical, psychological and political references. Juxtaposed with the belief that mythological dragons bring good fortune, prosperity and bounty, Future Feast provides ironic commentary on themes of gluttony, greed and declining resources. That Youngers was born under the sign of the dragon is his private joke. 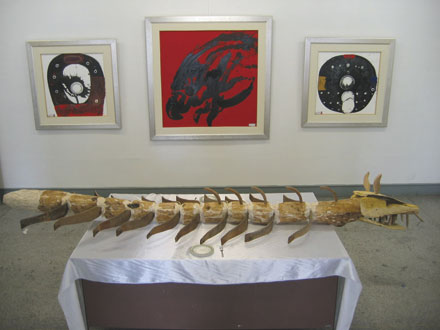 This month Youngers’ new work, Birds at Breakfast, appears in group exhibits at the Tokunaga Gallery and the Fukuoka Asian Art Museum in Fukuoka, Japan. The life-size birds with fingers on their wings are a humorous takeoff on the hornbills that hop from table to table begging for food at a Thai resort Youngers visited. Another piece showing in Japan comprises beetles dragging weapons, bags of money and tools: these are creatures stumped by a barren earth.

And in November, LA Artcore will host a solo show of new work by Youngers with a ridiculous thirty-word title summarized as Flora, Fauna, iruses . . . Or, Trees Make Better People. It’s a bizarre forest of trees formed by bones. Universal chaos is abroad as anthropomorphic creatures carry guns, grenades, garden tools and toilet plungers. What does it all mean? “If trees were human,” Youngers asks rhetorically by way of explanation, “would we treat them like we do?”

A friend of Youngers’, artist James Patrick Finnegan, has taught with him in Thailand and reckons that the long talks they’ve had over many beers has afforded him insight into Youngers’ work. “He’s saying that we’re in trouble and need to fix it up,” Finnegan believes. To achieve the kind of artistic success Youngers is now having, Finnegan says, “You have to be really stupid or really stubborn.”

It’s definitely the latter that’s working for Youngers. He’s stubborn and opinionated, too. Apparently his son inherited this spirit. Once when Oliver’s teacher suggested that the class discuss all the students’ art, Oliver responded, “I don’t look at bad art.”

Not everyone sees good art where they are expected to. Without a doubt, taste varies, and certainly in judging the aesthetics of public art. When installing Delegation at Ridgeview Elementary in Spokane, a city maintenance worker, upon learning that the piece was funded as part of the construction of the new school, asked disparagingly, “We paid for this?”

In truth, Ridgeview got a bargain that comes with Youngers volunteering to lead student art workshops this fall. He brushed the criticism aside: would a vacuum salesman take it personally? The adulation of school administrators, teachers and students attests to his having made a sort of public art miracle.