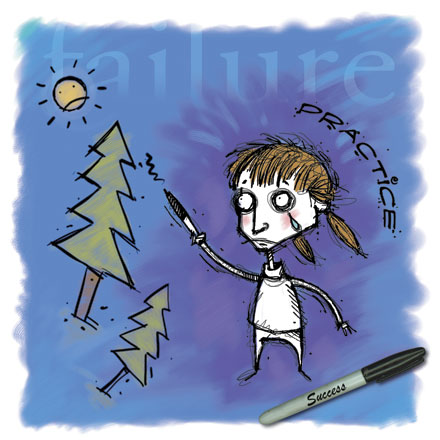 Making art isn’t easy. But it can be very rewarding, for mother and daughter alike.

Certain firsts as a parent you dread.

The first doctor’s visit, when your child shrieks as the syringe pierces the skin. The first black eye (and having to explain its origin to everyone you meet). The first heartbreak.
One of my most dreaded firsts was my daughter’s loss of creative innocence: the moment when she would put pen to paper and find herself frustrated because the outcome didn’t meet her expectation.

I had to face that moment head-on recently.

My darling six-year-old, black Sharpie in her hand, was rendering a fabulously stylized stick figure with horizontal commas for eyes, a curlicue of a J for a nose and a smile that evoked the Mona Lisa. Hands and feet were lopsided hearts placed on long limbs.  Clothes were simply sketched; a ’50s hairdo was deftly created out of a single line. Abigail was pleased with the result, until she added the quote bubble and discovered she didn’t have quite enough room to write her desired message.

She scribbled out the bubble and her face crumpled like paper destined for the recycling bin. I watched her try to replicate the drawing five times; each time she felt more thwarted. I suggested cutting out the figure she liked and pasting it to a clean sheet of paper. I thought we were out of the woods.

But then she began work on the background. In try after try, page after page, she could not get her tree to come out right. She drooped like a plucked flower. Her shoulders and the corners of her mouth sagged, her head melted into her chest.

“Art shouldn’t make you cry,” I soothed. “Art should bring you happy feelings! If you’re getting that frustrated, stop! Do something different.”

Resolutely, mulishly, she set her jaw and fought her way through the artistic dilemma, eventually creating what she deemed a substandard yet acceptable chunk of trunk and foliage.
I was proud of her, sad for her and irritated all at once. After six years of encouragement in all things creative, how did my kid learn to be self-critical?

Then I thought about what I’d said to her and how totally wrong I was.

I thought about golf. I consider a hole a success if par is three and it takes me twelve strokes to sink it. Then I write “9” on my scorecard. My putting stinks. I maintain that my technique involves intentionally avoiding a straight line to the hole; I choose to draw a stylish star around the pin.

I find learning (and relearning) the dynamics of the swing as tough as playing the violin. There’s the tricky hand grip to think about, the unnatural way the arms need to move, the posture, the restrained-though-fluid movement.

Coordinating all those things is just not fun.

But at last, I get the right combination of all the elements and the club meets up with the ball. There’s that perfectly resonant, magical sound and I get to watch my drive take off on its perfect trajectory.

It’s a split second of success won only by endless practice.

I thought, too, about learning ballet . . . with other adults who know what they’re doing.

French terms fly faster than the Blue Angels and the other dancers are as perfectly coordinated as air-show maneuvers. I catch glimpses in the mirror of my own flailing limbs and chide myself for moving in ways that would make Anna Pavlova plotz. My prima ballerina dreams clash violently with a rotund and uncoordinated reality.

But then I’ll catch my toe pointing the way it should or I’ll successfully complete a series of movements I’d botched before. I’ll watch an accomplished dancer and appreciate the movements on a new, heightened level, understanding how a complex dance phrase started out as one position, linked to another and ultimately strung together to shimmer like a diamond necklace.

Trying to golf or dance makes me set my jaw as mulishly as my daughter does. I push through the frustration, though, knowing that just as when I learned the violin, the more I do it, the better I’ll get.

Somehow, without the benefit of a drawn-out process of self-reflection, my kid was intuitively becoming her better self, fighting through failure as many times as it took to get to success. The blissful, free-spirited finger painter has been replaced by a Sharpie-wielding perfectionist. But her loss of creative innocence isn’t A Very Bad Thing, as I feared it would be.

In watching my child, I learned something important about art.

Art, I realized, is doing its job when it makes you cry. Emotionally connecting to a creative act — or its result — is part of the whole grand human experience.
Without sitting through courses on aesthetics and psychology and Western civilization, my daughter got it.