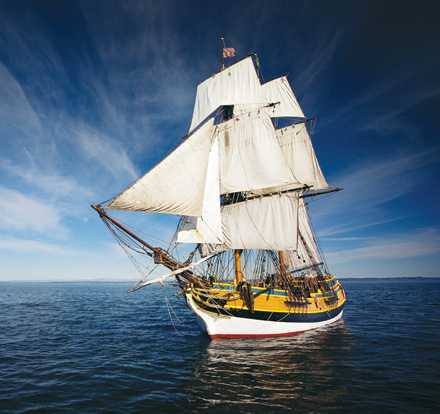 The tall ships are returning to the Foss Waterway where they once played a role in building the region.

In the late 1700s, George Vancouver, a Brit, and Robert Gray, an American, along with numerous other explorers, sailed the waters of the Pacific Northwest to probe the adjacent lands for their respective nations.

The arrival of these early sailors led to the Great Age of Sail, from 1880 to about 1910, when wind-powered ships dominated the ports of the Pacific Northwest. Commercial square-riggers lined Tacoma’s bustling waterfront and carried cargoes of Washington State–produced wheat and lumber to the four corners of the world.

The return of the tall ships fleet this Independence Day weekend is a celebration of a New Age of Sail. Today, tall ships frequently carry young men and women, twelve to eighteen years old and often from underserved communities, on voyages of adventure and environmental education. Training to crew a large, traditionally rigged sailing vessel can still be relied upon to build character, as it has for sailors since before the Age of Exploration.

To be sure, the names of today’s ships — Eagle, Bounty, Adventuress, Zodiac, Odyssey, Yankee Clipper, Lady Washington — evoke stirring images of seafaring in times past, of the romance, adventure and challenges of life at sea (including fearsome battles) as celebrated in fiction by Robert Louis Stevenson, C. S. Forester, Jack London, Patrick O’Brian and others.

The magic and majesty of tall ships can be revisited with the return the fleet; visitors will get a feeling of what it was like to be aboard one of the many magnificent sailing ships that were anchored in Commencement Bay, ready to load cargo, more than one hundred years ago.

Back in those days, in 1898, Willibald Alphons Kunigk, a young German sailor, set out to sea, beginning six years of shipboard adventures that would include two round-the-world voyages. His most memorable port call, though, was in Tacoma in 1901, where he and the rest of the crew of the three-hundred-and-thirty-foot-long British sailing ship Queen Margaret loaded a cargo of wheat before embarking on a one-hundred-day passage around Cape Horn to Belgium.

Four years later, Kunigk returned to the Commencement Bay port city. He settled in Tacoma, married and became a United States citizen. As civil engineer, planner and superintendent of the Tacoma Water Department, he became one of the city’s most prominent citizens.

His days and nights on the tall ships remained compelling memories throughout his life. When he was ninety-four, Kunigk remembered a 162-day voyage from New York to Yokohama, Japan. He was twenty-one and facing the challenges of deep-water, open-ocean sailing. “It was blowing blue blazes in dirty weather” around Cape Horn in South America, he recalled, and crew members were working aloft, sometimes one hundred and fifty feet above the deck. “We were hanging onto the rigging for our dear lives.”

The massive commercial cargo ships on which Kunigk sailed are gone; the tall ships were rendered historic relics by the advent of first steam and then diesel ships. However, many restored historic ships and also some new ones — square-riggers, schooners and other sailing vessels — have taken their place. In Puget Sound and in other waters around the world, sailors are still having memorable adventures at sea aboard tall ships. •