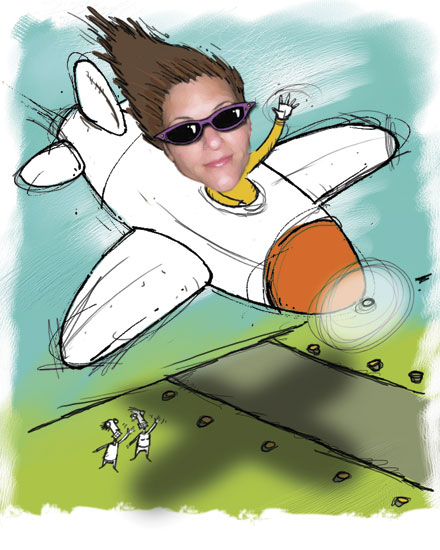 Whether or not life is a journey, comings and goings are powerful punctuations in time.

Sitting under a plumeria tree in front of the airport in Maui in the early spring, I took a deep breath. The air carried a heavy load of exotic floral fragrance, humidity and a dash of something in between gasoline and cigarette smoke. There was also a breath of relief that yes, indeed, we had survived the flight and not plunged to our untimely deaths in a fiery ball.

But there was still tension. We needed to procure the rental car and stuff it with six suitcases and a nine-foot surfboard. Then we would navigate strange roads to arrive at an unknown lodging situation. A group comprised of a mother-in-law, a mom and her mate and a six-year-old, we were cranky, sleep-deprived and in need of some sort of food that didn’t come in a modular serving tray and taste like heated sawdust.

And yet…there was the plumeria scent. There were palm trees swaying in the wind.  There was the exotic and the foreign. And with it, the familiar, too: Costco, Wal-Mart, Panda Express. It was the moment of arrival. I feel a similar moment now, tapping out my first column for City Arts. It’s a moment of “I have arrived.” OK. But what does it mean?

For me, a sort of optimistic realist (some call me a pessimist), “I have arrived” is a silly statement. You never arrive, because you are always in the process of getting someplace, then going to the next place. Get to Hawaii and right about when you become accustomed to wearing a sarong and bikini top to supper, it’s time to go home.

As the plane descends into Sea-Tac, spanning the inlets, islets, mountains and Puget Sound, you breathe in and exhale a sigh of relief. You disembark from the plane, await your luggage. But instead of uncertainty back on home turf, you feel a sense of resigned repose.

No sooner than you’re in the swing of things on the home front, something else comes up and you head out to the next airport. The way I see it, there are as many departure gates as there are arrival gates.

Losing more than sixty pounds a couple of years ago I felt I had arrived at my goal weight. I’d journeyed a rough road, literally and figuratively, eating pounds of veggies while logging miles on a bicycle, in a pool and on foot. I completed four triathlons, ran two five-kilometer races, a 10K and a 12K. My body, still not perfect, was leaning toward healthy.

And then, when I arrived at my physical prime (some would call it subprime), I had an injury. Picking up dog poop (oh, the indignity!) I pulled a glute or hamstring muscle; who knows what it was? I couldn’t be active in the same way anymore. Right about this time I found my vocation as a writer.

I learned the hard way that I need to work daily to maintain physical conditioning. If I sank below subprime I was not well. So I cut back to a shorter work schedule and reverted to rabbit food and mile-logging. Even though the concept of “lifestyle” irritates me, I have to admit that the act of staying healthy soothes me the same way that breath of plumeria air did in Maui. Running, on the sidewalk or a treadmill, is a kind of “Zen in action” with endorphin benefits.

It’s a bit like the artist who at last sells first one canvas in a group show, then five canvases in a solo show. She’s swirling above the stratosphere, breathing in a substance stronger even than exotic floral vacation reality. That artist has arrived.

Whether it’s an appealing image or not, she’s like a shark. The artist needs to keep moving forward to push through to the next uncomfortable moment. It’s the creative equivalent ofthe half-marathon I’m currently working toward, playing my part as columnist and editor helping to put out a monthly magazine.

The evolving artist realizes, as I do, that arrival, as a measure of success, is overrated. Still, the realistic optimist part of me sees beauty in arrival: Savor the moment, then head off towards the next horizon. Arrive, claim the baggage, breathe in the lovely air.

Then try to find your hotel and the beach chair that convinces you, yes, you’re really here.