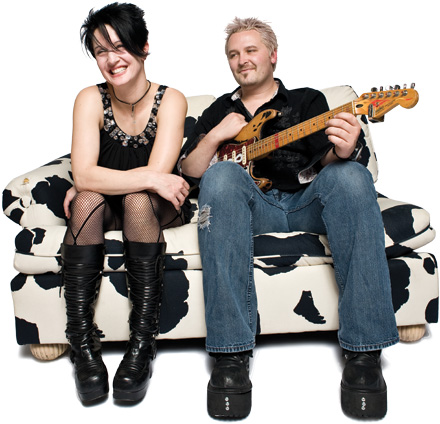 An intimate chat with Deborah Page

Deborah Ritchie stands out. Well, what beautiful woman with a beautiful voice doesn’t? But this local musician doesn’t quite fit where you want her to. She’s half of Deborah Page, a distinctive indie duo comprising Ritchie and Paul Uhl, with whom she shares her life offstage. The music on her new debut album, For, keeps you listening: incisive guitar licks laid over hypnotic electronic beats. Forlorn lyrics arrive just in time to offer hope in the face of loss. I’m not a folkie! Ritchie seems to be asserting as she explores all the places her voice can go, from falsetto cries to sultry whispers. Still, there’s something earnest in her music that makes the acoustic guitar sound at home. One of the best tracks on the new CD is called “Stay.” Ritchie makes you want to. We recently spoke with her about the unexpected life that brought her to Deborah Page.

City Arts: What did you do before music became your full-time thing?

Deborah Ritchie: I was a store manager for Pier One Imports for five years. Before that I was a greenskeeper on a golf course. For two years I cut and mowed greens, rigged sandtraps. Before that I worked at a horse farm, shoveled poop, fed and watered horses. Then I was a waitress. I think I liked the horses a little better than the people.

CA: Didn’t you live in Mexico?

DR: From the time I was twelve till I was twenty. I was born in St. Joe’s, then went back and forth between Steilacoom and Tacoma. My dad was in the Air Force Reserves. In 1979, my mother got involved in a Christian organization that did missionary work in Mexico. She heard this priest talking about selling everything you own and going to serve the poor in Mexico. She thought that sounded like a good idea. He was such a very charismatic speaker and my mother felt a calling. She was always a very giving person.

My mom, dad, younger sister and I went to help the poor in Juárez. We ran an orphanage, milked cows, mended fences, taught kids to live, laugh and feel a part of a family. It was a religious community. We had no electricity, outdoor bathrooms, cooked on wood stoves. We worked hard. It was a very different life. My last formal year of schooling was seventh grade.

There were a lot of prayer meetings. That’s where I really learned to sing and play. Almost everybody was ten or twelve years older. I copied them because I was always very shy about singing. I figured if they sounded good, and I sounded like they did, I would be okay, too.

I was married just after I turned seventeen, which was common in Mexico. We were going to wait a couple of years to have children. So, of course, I became pregnant four months later. I crossed the border into El Paso and had both my girls at a midwife birthing center. Five hundred dollars to have your baby there. No pain meds and they sent you home six hours after you had the baby.

CA: When did you decide to be a musician?

DR: A lady across the street was having a garage sale; she had this little guitar for sale. She wanted seventy-five cents but it only had three strings, so my dad got it for fifty cents. I had to have it. I was seven. I took it home and picked out “Mary Had a Little Lamb.” It wasn’t tuned. That was the beginning.

Then for Christmas I got this Sears, Roebuck, dark black guitar and guitar lessons. I took one lesson and I hated it. It was like math. I said, just buy me a book, I’ll learn it myself. I just need to know where to put my fingers. I would hear songs on the radio and pick ’em out.

When we moved to Mexico, a lot of people played guitar. That’s where I first got my hands on a twelve-string and I fell in love with it. There were a lot of college students there and they all knew different songs. So I would watch how they played. And a lot of the Mexican people we were around played guitar, so I learned their style. But it was all Christian music. We weren’t allowed to listen to rock ’n’ roll.

CA: How did you decide to come back to Tacoma?

DR: I was married and had two children. One day we decided that we’d paid our dues, done our time, helped enough. My parents, my sister, her husband, my husband, our kids — we moved back to Steilacoom.

It wasn’t until I met Paul [Uhl] that I really started playing again. In 2005, on Anderson Island. I was playing at a local fair. That’s when Paul saw me. He introduced himself and said, you know, I play music, too.

One day Paul brought a microphone. I had never heard myself on a mike. He said, let’s record a song. He’d say, can you play this, this and this? It just sounded good, the chemistry was right there, instantly.

We got off the island in 2006 and started playing at Sanford & Son. I’ve always loved being onstage. Even though it freaks me out every time I get up there, I still love it.

CA: Where do you like to take people with your music?

DR: Most everything I write comes from a personal experience. Like “Luisa’s Song.” My daughter had had her first heartbreak. She was so torn up. So I wrote a song to kinda help me through being a parent not able to help my daughter.

“Circumstance” was kind of like “screw you” to all the guys: I don’t need you anymore. The only one that has no meaning to it whatsoever is “Mary Mack.” I was talking to my daughter and said, anybody can write a hip-hop song. Jokingly, I said I could make a hip-hop song out of a nursery rhyme or a clapping song. Like “Miss Mary Mack.” All you have to do is add a couple of verses, put a beat to it and everybody thinks it’s the coolest song ever. Maybe it’s a little jab at the industry.

CA: Where does the distinctive Deborah Page Sound come from?

DR: Paul grew up with a lot of the great ’60s guitarists, like Jimi Hendrix and Stevie Ray Vaughan and the Doors. I was more influenced by Pearl Jam and Sarah McLachlan and Tori Amos and Dave Matthews. I like the lyrics to make the bling and then his sound, that kind of ’60s guitar. It just makes Deborah Page.

What’s important to me is that a song make me feel a certain way. If I can convey that to other people and it makes them feel something, then I’ve written a good song. I would make the song anyway, if no one ever listened and I just played it in my living room.

CA: How do you describe your sound?

DR: Band in a box. Our music is kind of a combination of everything. People say, that’s like karaoke, but it’s our karaoke. Maybe you’d say it’s like The White Stripes. One thing I like is that we’re not the loudest: you can hear the music and the words.

CA: Name three people, living or dead, you would like to influence with your music.

DR: Eddie Vedder, because the way he writes a lot of his music, it’s very strong to me. I’d be scared as heck, but if it were to move him, or if he gave me a compliment…he’s one person I’d want to perform in front of. Probably everybody at the Grammys. (laughs) Oh! My mom, just to say, look what we’ve done. She heard some of it, but she never did hear the whole album. She said, “You guys are great, keep doing it, keep it up.” My mom kinda became more normal. She went through the whole cancer thing and realized that you never know what’s gonna happen. She became a lot more down-to-earth. She passed away in October.

CA: What, or who, inspires you?

DR: Paul inspires me a lot. He’ll play something and I’ll think, how am I gonna top that? But a lot of the time life itself inspires me, the teachings of what life has thrown at me.

CA: What’s next for you?

DR: We’ve made applications to tons of places: Art on the Ave, Fourth of July, Super Saturday, Taste of Tacoma. The lady said you have to have four or more in the band. I asked her to reconsider, because we sound like a band, we sound like we have a drummer and a bass player. And she says, well, it’s just not as visually pleasing to the crowd when they can’t see a drummer. I told her, fine, my daughter could act like she’s playing the tambourine. Still, we have a lot of exciting gigs lined up — we’re playing the Glass Roots Festival, the Puyallup Fair, and in Seattle on Alki Beach, a thing where twenty-five bands play.

DR: Heavier, grittier. It’s just the emotional state that I’m in. They’re stronger songs.  I’m really excited about our next album. It’ll be different but the same. •