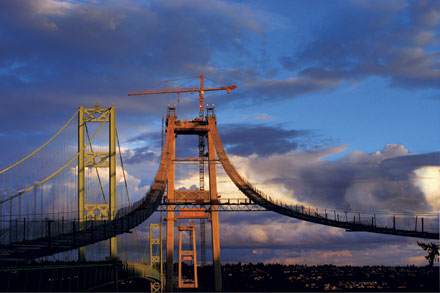 As we ready ourselves for the grand opening on July 15 of the latest magnificent suspension bridge over the swift waters of the Tacoma Narrows it’s impossible not to recall the first bridge and its breathtaking career as both a film star and a thrill ride. Galloping Gertie, Tacoma Narrows Bridge the First, has become our most celebrated failure, a nice try we have all come to love like a racy aunt who works in burlesque. Observing the marvel of constructing the new Narrows Bridge, Tacomans can take a quirky pride in our city’s unique status in the psyche of structural engineers, bridge builders and aerodynamic wonks the world over. The November 7, 1940, film of Gertie’s dance of disaster and cataclysmic failure — which couldn’t be better if Buster Keaton had somehow collaborated with Steven Spielberg — is a standard text, still visually spellbinding: an accidental special effects sequence that stops the show and drops the jaw every time.

The finish of Narrows III, like the completion of Narrows II in 1950, will inevitably be tainted with anticlimax. Both the side-by-side bridges are, after all, children of an old vaudeville star. But Narrows III is nonetheless something to celebrate. Suspension bridges are becoming a thing of the past as lighter, stronger materials and new engineering methods take their place (see the downtown I-509 bridge). The concluding bits of work by Tacoma Narrows Constructors on this bridge are like the rigging of sails on the last clipper ship.

So we should note this important endeavor. It is a Big Thing in our built environment and not at all bad to look at. In the most elegant examples of what we build there is a balance between the mark we make in our time and the memory we hold from an important past. Narrows III seems to successfully strike that balance, spanning space and time as both an old and a new landmark.