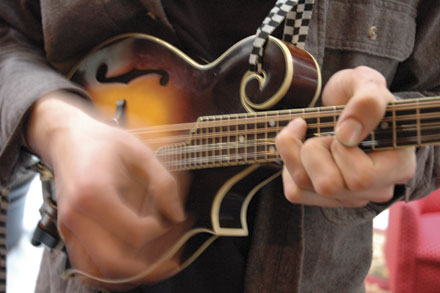 A celebration of bluegrass and beyond, Wintergrass is an acclaimed music festival and a great place to make friends.

On a Thursday evening in late February, the crowds begin to gather in the lobby of the Sheraton Tacoma Hotel.

Look at the lobby scene over the mezzanine rail and it’s evident this isn’t a software tradeshow or a medical convention. Half of those assembled, maybe more, are carrying musical instruments. Losing no time, the early birds begin to jam. The music usually starts in the alcove next to the coffee cart.

Other musicians move slowly, watching to see which group needs a guitar player, a fiddle or a tenor singer. By this time on Friday, there’s barely room to walk across the lobby. There are impromptu jams everywhere you turn: old band mates embarked on a musical reunion or strangers whose shared love of bluegrass standards produces an instant ensemble, with tight three-part vocal harmony and precise instrumental breaks. In either case, it sounds as if these eager pickers have been playing together for years.

This is Wintergrass, a festival that’s all about great acoustic music — and equally about making friends. Upwards of ten thousand people are expected to attend this year’s event, February 22 – 25, which includes concerts, rockabilly dances, workshops and the sense of community that inevitably emerges from a gathering of bluegrass lovers.

This is a model feel-good family event: Over the years, since the first festival in 1994, more than one couple has announced their engagement at Wintergrass; a pair of devoted volunteers were married by a justice of the peace before starting their shifts and two very happy festivalgoers exchanged vows on the main stage in the middle of a show. Not surprisingly, kids are welcome and can be seen and heard everywhere (“We love kids and especially love to see them pick up an instrument and play!” says the festival Web site), with special classes and performances scheduled for them.

About as far away from the home of bluegrass as you can get and still remain in the continental U.S., Wintergrass has gained renown as one of the nation’s premier acoustic music events. Last year, the International Bluegrass Music Association named Winter­grass “Event of the Year,” giving props to Acoustic Sound, the non-profit organization that produces Wintergrass, and to the festival’s co-directors, Patrice O’Neill, Earla Harding and Stephen Ruffo.

“We see it as our responsibility to remove all barriers between artists and fans,” says Ruffo. “You could just present the music, with no relationship between performer and listener. But that’s not the way we do it.” Many of the 300-plus volunteers who help make the festival run have participated since its first or second year. 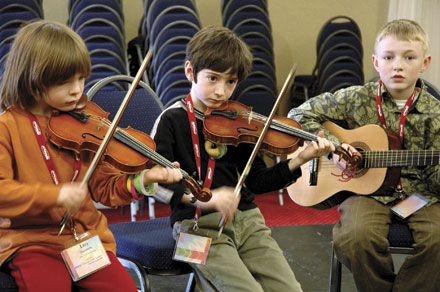 In the beginning, there was Bill Monroe, a singer and songwriter of old-time country music and a virtuoso mandolin player. Already successful performing with his older brothers, Birch and Charlie, Monroe started his own band in the late 1930s and named it the Blue Grass Boys, after his birthplace and home, Kentucky, “the Blue Grass State.”

Before Monroe’s era, country music included everything from Jimmy Rodgers (“the Singing Brakeman”) to the Carter Family to jug band and fiddle music for dancing. By 1949, Monroe’s music was referred to as “bluegrass,” an American roots genre all its own. Helping to define the sound was the three-finger banjo style of Earl Scruggs, who, along with singer and guitar player Lester Flatt, joined Monroe in the mid-1940s.

Bluegrass struggled to remain alive outside the southeast during the first surge of rock and roll. College students and music historians rediscovered it during the folk revival in the ’50s and ’60s, rescuing the Blue Grass Boys from obscurity, inciting many to learn the banjo (long considered too “hick” for mainstream country music) and spreading bluegrass festivals across the country. 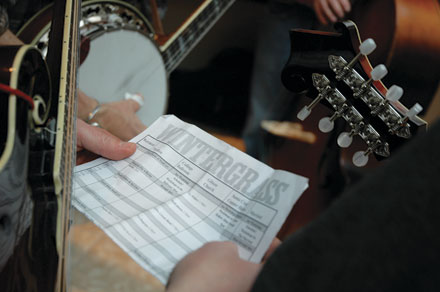 Founded by O’Neill and Harding, along with Rob Folsom and Charlee Glock-Jackson, as one of the first major indoor bluegrass festivals, Wintergrass contributes to the evolution of this unique musical style. Bill Monroe, well into his eighties and celebrated as “the Father of Bluegrass,” performed at the first two Wintergrass festivals. Just about everyone who attended has a story of jamming with him, chatting or watching him interact with the children. More than a decade later, fans still talk about the “Lobby Stage Event.” That was the time Monroe walked into the Sheraton and, without removing his soaked raincoat, stepped onto the small stage just inside the front doors. “Mind if I join you?” he asked casually. A stunned group of young musicians kicked off the Monroe classic, “Blue Moon of Kentucky,” fulfilling every bluegrass musician’s dream of backing up Bill Monroe. Monroe died in 1996; his memory echoes in the music making at Wintergrass every year.

Bluegrass fans are gracious, energetic and exuberant. They also can be cantankerous about the music they love. The question on Internet forums guaranteed to incite indignation among the faithful, is, “What is bluegrass, anyway?”

Over time, it’s become a harder question to answer. For perhaps twenty-five years, old-school bluegrass was narrowly defined and easily delineated from other country and acoustic styles. If you went to a bluegrass festival, you knew what you were going to hear.

But, like any vital genre, this music has evolved. Years ago, to the chagrin of traditionalists, popular bands like the Country Gentlemen and, later, Seldom Scene started covering folk and rock songs in a bluegrass fashion. Bluegrass icon Earl Scruggs shocked audiences by going electric. And extraordinarily talented musicians from David Grisman to Bela Fleck and Chris Thile fell in love with bluegrass and began experimenting with new sounds and styles.

The challenge Wintergrass organizers face today is keeping the festival fresh and growing while honoring tradition. “We’re bent on finding the next cool thing,” says O’Neill, “but at the same time we want to respect the fans who’ve been into this for thirty, forty, even fifty years.”

About five years ago, the festival organized a twenty-year reunion of “newgrass” mandolinist David Grisman’s original quintet playing jazz-influenced music with bluegrass instrumentation. It was the first year the festival sold out, helping its organizers understand the importance of balancing old and new to delight the largest number of fans.

O’Neill enjoys the challenge of finding a line-up that will satisfy just about everyone’s tastes. “That’s what’s so great about this community,” she says. “They constantly argue about bluegrass. They wrestle with the tension between tradition and making the music new. There’s always a nod to tradition, even in the most progressive interpretations. And, believe it or not, the traditionalists are welcoming to people who mess with their music.”

This year’s festival lineup is perhaps the most eclectic yet. Filling the traditional space is Doyle Lawson and Quicksilver, whose vocals and gospel harmonies consistently win national awards. The Gibson Brothers and Blue Highway are younger musicians who bring new vigor to the traditional sounds.

On the upstart side are Chris Thile (of Nickel Creek), who is bringing his new group, Chris Thile and The How to Grow a Band; the Infamous Stringdusters; the Mammals; the Greencards; Crooked Still; and Uncle Earl, an all-female group. Such artists Tim O’Brien, Darrell Scott and Mike Marshall bridge the gap between traditional and contemporary.

O’Neill says she and her co-organizers were feeling they had the mix just about right, but still needed one more key ingredient to really make the schedule sing. Then they found the missing piece: Jerry Douglas and his new ensemble. Douglas is credited with raising the playing of the resophonic guitar (an acoustic guitar, with a metal resonator, that’s held strings up and played like a steel guitar) to new standards. He’s gained widespread popularity touring and recording with Alison Krauss and Union Station but is a highly respected player — and twelve-time Grammy winner — in his own right.

On Thursday evening, there’s a show at the Greater Tacoma Convention & Trade Center’s Pavilion Stage, across the courtyard from the Sheraton. Shows are scheduled on the Pavilion Stage and four other stages in the afternoon Friday and Saturday and extend well past midnight. Later, there’s dancing in the Sheraton ballroom. Workshops run all day. 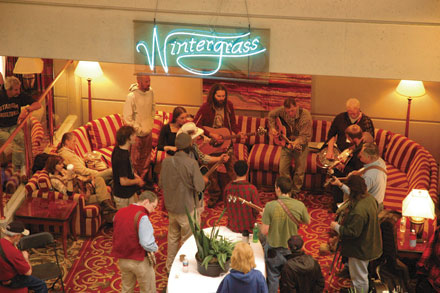 You might prefer to spend Saturday in the Urban Grace Church, a few blocks from the Convention Center on Market Street, a more intimate setting than the Pavilion. Plan ahead and bring food for breaks between acts; if you leave your seat unguarded, it will be taken when you return. Some of the festival’s most fabled performances have taken place here.

Singer-songwriter Darrell Scott talks of the time when his all-star band got in “the zone” on the church stage. After their set, as the audience clapped and shouted its approval, the band members wandered backstage, sat down and looked at each other, wondering, “What just happened out there?”

Performers love to play Wintergrass, where organizers are known for taking great care of them. Though the artists aren’t required to lead workshops, nearly all are eager to interact with fans not only through enthusiastic performances but also in the workshop setting. 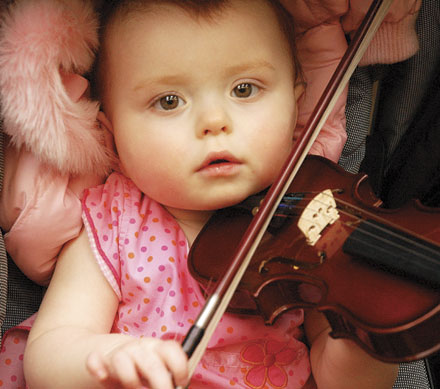 Pete Goodall, a Seattle fan and picker, remembers volunteering backstage about ten years ago. Tony Rice, one of the most influential guitar players in bluegrass, had just performed on a guitar previously owned by the late Clarence White, another legendary player.

“Tony Rice was there with the famous Martin guitar lying in its blue anvil flight case,” Goodall recalls. “I took a good long look at it and thought about how much great music had been made with that guitar. A young man, maybe fourteen or fifteen, was gawking at it as well, when Tony said, ‘Go ahead, play it!’ Well, the look on that young man’s face was worth the price of admission! He was a pretty good player and Tony commented that it sounded real good. The boy’s mother took a picture of him holding the guitar and standing next to Tony Rice. To me that’s what bluegrass music is all about.”

And what Wintergrass promises: hot pickers, memorable performances and good friends, sharing music on- and offstage, jamming everywhere they can find a little room to cut loose.

For schedule information and to purchase Wintergrass tickets, go to www.acousticsound.org or phone 253.428.8056.