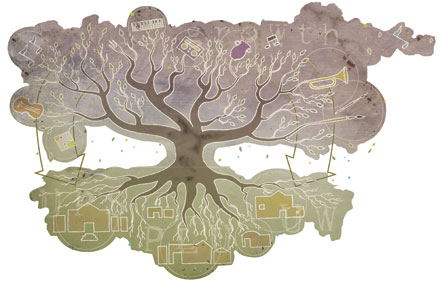 Arts and culture in Tacoma is fed in innumerable ways by a richly forested ecosystem of five noteworthy colleges and universities.

The most galvanizing cultural event in Tacoma this fall was Cornel West, Professor of Religion and African American Studies at Princeton University, author (Race Matters, 1993; Democracy Matters, 2004), sometime movie star (The Matrix Reloaded), hailed as “America’s public intellectual,” holding forth for two and a half hours — no notes, no breaks, no water that I can recall — to a sellout crowd of 2,500 at the University of Puget Sound Fieldhouse on a rainy September weeknight. West quoted scripture, philosophers, novelists and poets and jazz and blues lyrics and riffed original lines in a virtuoso style that recalled the jazz legends whose names he lifted so reverently into the reaches of the darkened arena.

My point, however, is not West, but rather the venue: one of three local universities — University of Puget Sound (UPS), Pacific Lutheran University (PLU) and University of Washington Tacoma (UWT) — and two community colleges — Pierce College and Tacoma Community College (TCC) — which together comprise a cultural ecosystem that has nourished the arts in this community for more than 100 years.

Imagine these schools as the center of an arts ecology as complex as the Hoh Rainforest. UPS and PLU, both over 100 years old, are the venerable giants of the forest. The “sapling” University of Washington Tacoma, just 16 years old, is planted on a “nurse log” of derelict warehouses on Pacific Avenue. The 40‑year-old community colleges feed transfer students to the three universities.

The foundation of these colleges and universities is their academic mission, the day-to-day work of teaching, learning and research. Arts faculty — highly trained and seriously talented musicians, writers, visual artists, actors, dancers — bring passion and conviction to the nurturing of the next generation of artists and arts audiences.

Because of the relatively stable funding of the colleges and universities and the academic freedom of their faculty, the schools encourage artistic risk, such as PLU dance and theatre faculty member Maureen McGill’s recent “Global Blues,” an examination of local environmental issues in movement and video.

The five schools also share a mission to build facilities that not only support teaching and learning, but also function as gathering places for performance and exhibits, while developing the architectural inheritance of the community. Lagerquist Concert Hall at PLU, for example, presents acoustics so perfect the sound fairly shimmers. The hall’s huge Fuchs organ, three stories tall and surrounded by intricate wood carving, makes music that moves body and soul with the power of a back seat subwoofer.

On the other side of town, the UWT campus earned awards from the Sierra Club, American Institute of Architects and National Trust for Historic Preservation for its impact on urban revitalization. UWT planners wisely chose to dedicate street-level space on Pacific Avenue as fertile “soil” for an engaging mix of galleries, restaurants and experiments in entrepreneurship such as the UrbanXchange.

At the west side of town, in a wonderful new metal-clad building, The Gallery at TCC demonstrates a commitment to local artists with its Annual Juried Local Show.
All five schools are galleries of public art. The universities have the requisite Chihulys and the “publics” support a large collection of works commissioned in partnership with the Washington State Arts Commission.

UPS and PLU have been around long enough to have produced a surrounding “grove” of arts organizations, venerable institutions such as the Tacoma Symphony, founded 60 years ago by UPS music faculty, and KPLU (88.5 FM), which in 40 years has grown from a 10-watt station broadcasting classical music to a 100,000 watt giant serving a devoted regional audience of jazz, blues and National Public Radio fans. The Northwest Sinfonietta, founded in 1991, is directed by UPS faculty member Christophe Chagnard.

But the proof of higher ed’s success in building local culture are the students who make art (UWT and Pierce student filmmakers took top prizes in the Grand Cinema’s 72-hour Film Festival); who volunteer in the community (PLU students sponsored a hip-hop dance competition for Parkland kids and UPS theatre students teach acting to students at Grant Elementary); who stay in town to make more art (UPS grad Stephanie Kriege dances with Callous Physical Theatre at Barefoot Studios and Pierce grad Christiane Esparza makes movies in the Hot Shop of the Glass Museum); and who seed new arts organizations (a group of PLU alumnae recently founded the nonprofit MLKBallet in a restored church on the Hilltop).

In addition, the colleges and universities seek symbiotic relationships in their neighborhoods through outreach programs and partnerships. UWT is ­developing an “Arts and Community” curriculum in which students will ­facilitate projects that empower members of marginalized communities to tell their stories through art. UWT has also partnered with its neighbor, the Tacoma Art Museum, to offer students access to an important cultural resource. UPS offers noncredit instruction to musicians of all ages and abilities through its Community Music School.

But the champions of outreach are the community colleges, with their open admission policies, low tuition and extensive menu of transfer and noncredit arts courses, the latter presenting opportunities for expression in everything from Celtic Fiddling to Adobe Photoshop.

The arts ecology — the “woods,” if you will — of Tacoma’s colleges and universities is, as Robert Frost described a more personal woods, “lovely, dark and deep.” Promise yourself to stop awhile at their campuses, to sample their offerings and enjoy their facilities. The “Parapet Relay” message at the top of the Garretson building at UWT broadcasts the invitation to take part in art most compellingly with its clarion call: “Gather.”