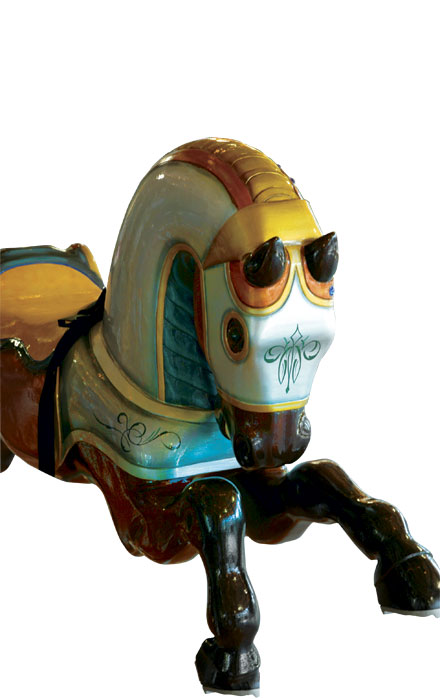 There’s a zebra in Joanne Sessions’ living room. Three giraffes, a peacock and some horses, too. This menagerie is what remains of a remarkable project Sessions began over a decade ago. Sessions and her husband, Dale, are the project managers on the re-created 1917 C.W. Parker two-row carousel at Point Defiance Zoo. A labor of love, to say the least, restoration of the merry-go-round required more than 25,000 hours of work.

With the help of a core group of dedicated volunteers — members of the Washington Antique Carousel Society — Sessions hand-carved and painted 28 large animals, three small animals, a sled and other adornments. A career as a supply technician at Fort Lewis did nothing to prepare her for success and acclaim as a wood carver. But of skills honed over time and innate imagination, she fashioned for the carousel exquisite creatures including a tiger, an elephant and a Husky. Reviving the remnants of the antique amusement device resulted in a recovered work of folk art animated to amuse new generations of visitors to the zoo. “Seeing the carousel go around for the first time,” says Sessions, “was very special. It gave me goosebumps.” Perhaps as many as 4,000 wooden carousels were carved in early 1900s America. Fewer than 150 still operate today. A lovely one is now awhirl in Tacoma.