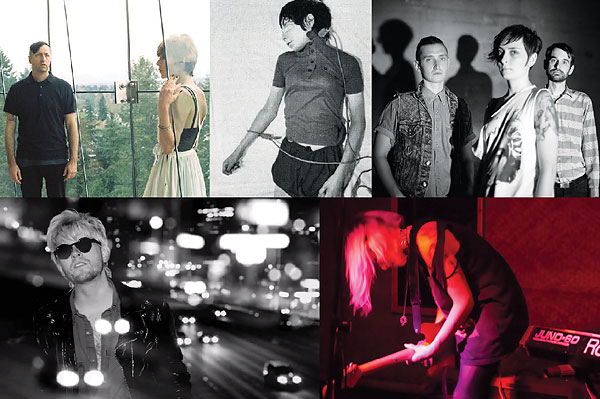 The time is right for Seattle to go goth.

The last platinum-selling, nation-penetrating rock movement out of our area was indie rock—specifically, the soft and thoughtful “rock stars” who seemed like they might be school teachers and cared a lot about lyrics and chords, like Death Cab for Cutie, the Shins and the Decemberists—the musical equivalent of wool socks. Their sound still persists in the wider sphere (the Lumineers, Of Monsters and Men, the Head and the Heart). Twitch and Gloam: Dark Sounds from the Pacific Northwest is part of the backlash.

The strongest tracks bury classic pop structures in cobwebs. Perpetual Ritual stands furthest out in front with its Suicide-esque “Certain Time of Night,” a pulsing melt of various drones (organ, guitar, noise), with vocals and drums smoking on the other side of the graveyard. Baby Guns gets a gold star for bringing hip-hop into the equation with ‘80s style drum machine claps. Nightmare Fortress uses mechanized drums effectively, too, in the dancey “Faces in the Dark.” Also notable: Haunted Horses, Light House and //ZOO, who build music like architecture, with hard drums and banshee guitar or synthesizer leads.

Sometimes the sounds on Twitch and Gloam are dark and clanging; other times a whitish-pink fog. The album demonstrates that goth can be techno, rock, ambient—anything. Goth is a stance, a certain angle that musicians can apply when they want to accentuate style and texture and disaffectedness. Varied as Twitch & Gloam is, all the songs are relevant to the theme. Are they advancing the form, or its established subforms? Not really. But the point is, here we are at this dark time, and the second point is, these songs are good.

The goth party is not only happening in the Northwest—it’s circling nationally, internationally. We live in the time of the sensational vampire novel series Twilight and mainstream pop stars like Rihanna and A$AP Rocky, who play with satanic imagery in their dress and videos. But the industrial mystique feels unusually strong in our corner of the country, where our electronic music scene and hip-hop are into it, too, and a partial list of swirling forces includes Key Nyata, Skull & Bones, Blue Sky Black Death, Black Hat, Numbs, King Dude; Dethbook magazine; the clothing line Actual Pain. Collectively, it’s a moment. Props to Flat Field Records for this collection. It makes the time capsule easier to put together.

Twitch and Gloam – Dark Sounds from the Pacific Northwest is on Flat Field records.