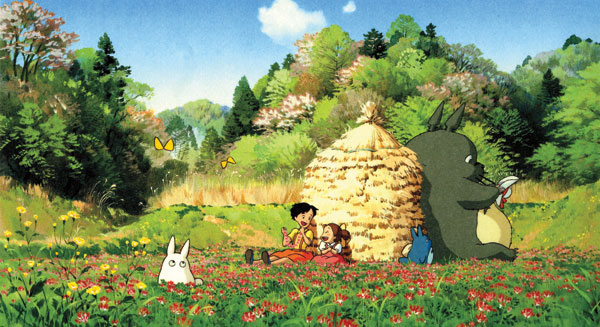 May 7
Mama
Guillermo Del Toro continues his bid for horror impresario by producing this odd fairy tale about two girls orphaned by tragedy and raised in the woods by a monstrous spirit. Reclaimed years later by their uncle and his bass-playing girlfriend (a distinctive performance by Jessica Chastain), the feral girls get stuck in the middle of a custody battle between their living relatives and their supernatural Mama. BT

May 14
Cloud Atlas
Directed by Andy and Lana Wachowski (The Matrix) and Tom Tykwer (Run Lola Run), this ambitious, genre-hopping epic spans hundreds, maybe thousands, of years, leaping heedlessly from the post-apocalypse to futuristic Korea to the high seas of the 18th century to 1970s San Francisco. Based on the acclaimed novel by David Mitchell, the film explores themes of love and connectivity, which show a refreshing emotional openness and lack of cynicism. KC

May 14
Crimewave
This 1985 collaboration between Sam Raimi and the Coen Brothers is the bastard, redheaded stepchild of their respective filmographies. None of them was too happy with the final result, an admitted fiasco, but fans love this bizarre slapstick cartoonish noir. The impressive cast really hams it up: Brion James (Blade Runner) and Paul L. “Bluto” Smith steal the show as a pair of deranged exterminators who eliminate both vermin and humans alike. Louise Lasser, Reed Birney and Raimi regular Bruce Campbell also appear. SH

May 21
Side Effects
With a title like Side Effects, you’d expect Steven Soderbergh’s latest film, a thriller that loosely revolves around the pharmaceutical industry, to be a bracing condemnation of big pharma and how it’s ruined all our lives. But Soderbergh is too smart for something so trite. Instead he’s turned out a clever, very dark and often funny exploitation movie. It spins our cultural dependence on antidepressants and our entitlement to happiness into a larger indictment of Americans’ general inability to take responsibility for anything they say, do or consume. ML

May 21
Ultimate Gangster Collection
This collection includes Little Caesar, The Petrified Forest, The Public Enemy and White Heat in their Blu-ray debuts. The standout of the bunch is easily White Heat: Raoul Walsh’s frenzied, pitch-perfect portrait of Cagney as a ruthless, manipulative, mama-obsessed crime boss, replete with that seminal “Top of the world, Ma!” speech. Cagney again shines in William Wellman’s The Public Enemy, while Edward G. Robinson and Humphrey Bogart take over gangster duties in Little Caesar and The Petrified Forest, respectively. Packed with commentaries and Depression-era Looney Tunes, this set may not be ultimate collection, but is certainly essential. MS

May 26
My Neighbor Totoro
When I was five or so, my dad brought home Hayao Miyazaki’s My Neighbor Totoro from our small, local video store. I fell in love with it and so my parents bought me my own copy, which I eventually broke because I watched it every week for about five years. It’s simple: a sweet story about two young sisters who discover that the spirit of the forest lives in a giant tree behind their house. On a deeper level, My Neighbor Totoro is about the power of nature, how to trust in our family and friends, and finding the strange and fantastic in our daily lives. This masterpiece of the Studio Ghibli collection and one of the most beautifully animated family-friendly movies ever is finally available on Blu-ray. It’s worthy of a permanent place in your home. PF

Pictured above: My Neighbor Totoro