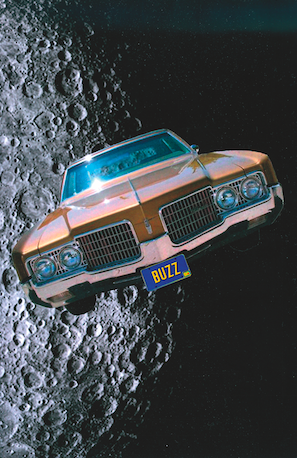 Buzz is an imperfect novella about an imperfect character, an equation equally elegant and frustrating. As an experiment in literary pop quasi-memoir, it fails until it succeeds, at which point you’re probably invested in seeing it through. Its purposeful brevity works in its favor—by its end Buzz roars. This book and its author, Seattle artist/writer/photographer Robert Zverina, crack open big ideas about identity and obliteration with the violent acuity of a car crash.

Much of Buzz takes place inside the head of 30-something Buzz Polstar, the story’s intelligent, indigent main character as he recollects his Czech-immigrant parents in Communist-era Prague, his intoxicated college life, his awkward intimacies, his slouching toward adulthood. Inhabiting Buzz’s monstrous self-absorption, these moments are images more than experiences. Zverina forgoes propulsive plot in favor of pained, lyrical observation.

In the first chapter, Zverina establishes the book’s primary temporal parallel: Buzz is born in the back of his stepfather’s Oldsmobile 98 on the night of July 20, 1969—the same night Buzz Aldrin becomes the second man to walk on the moon. (“The moon,” Zverina writes, “which had held humans in thrall for 10,000 years, had now been attained, was old news, would soon be reduced to a rerun.”) Concurrently, it’s Christmas Eve, 1999 and Buzz is driving his stepfather to JFK for his final trip to Prague and worrying about the ramifications of Y2K. It’s a confused, confusing beginning and Buzz recounts it all, omniscient and powerless beneath the permanence of his memories.

The book is composed in stanzas, like an epic poem, two or three sentences per paragraph, double spaces in between. Stanzas are numbered within chapters; chapter titles refer to phases of the moon. The storyline lurches and jags through this format like an alcoholic reverie, time and place tangled and blurred. Amidst the woozy narrative, Zverina’s sentences are startlingly lucid. Where his sense of story meanders, his writing is penetrating. This stylized severity is initially alienating; it seems hurried or abridged. But the cadence of his language becomes mesmerizing, instilling a fluid impressionism perhaps not unlike the one with which Buzz engages the world.

The book gains momentum in its second half, when erratic flashbacks give way to chronological consistency. Through his college years and their aftermath, Buzz’s behavioral patterns with friends and lovers depict a scion of hopeful immigrants who has lost hope for himself. As he descends into a misguided, liquor-fueled holy mission, Buzz is revealed as a remorseless failure who cannot forgive others their failures. The realization of imperfection as innately human is graduation into adulthood. Buzz remains a stunted man-child.

At Buzz’s climax, a viscerally rendered near-death scene delivers a cosmic, revelatory concept too deep to get into here. But it’s worth all the angst and uncertainty that precede it. Seriously—I read and reread this scene with an anxious and inflated heart.

In the end of this short, potent ride, you’re left with a transcendent question: To forgive is divine, but how many errors can one forgive before acknowledging a thing is utterly, permanently broken? And what then?