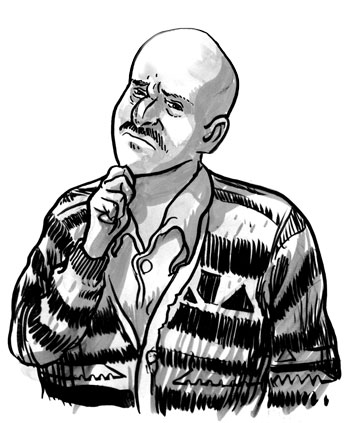 The MC Type believes that rapper-packed, hometown-repping collaborations are destroying hip-hop. He made his own to prove it.

“This’ll unify the scene, this’ll put us on the map. It’s the town, let me show you were it’s at.” And with that the MC Type opens “Space Needle,” the first single from his latest full-length album, A Good Tattoo. What follows is a six-minute-long roll call of Seattle rappers, each dropping two bars about Seattle. The song fits the hip-hop convention of the hometown-proud, rapper-rich cut, already well executed by locals Macklemore and Jake One. Type’s contribution to the canon is notable for its ambition, as it features 50 local MCs. It’s also, says the rapper, totally ironic. I caught up with Type, aka Jeffrey Tune, as he prepared for the April 1 release of A Good Tattoo.

Where did you get the idea for this track?
I was thinking about the stereotypical cry for unification of the hip-hop scene through collaboration. It always seems the most amateur artists are the ones claiming if they just got on a song with a big shot or rapped over a beat by so-and-so they would get the exposure they needed to be a household name. I wanted to get really extreme with it, so I aimed to get every local rapper I could. For the record, I am not accusing any of the artists on the song of being the type of artist I mock.

Did you have the number 50 in mind, or is that just the way it happened?
Fifty was just where we landed. I wanted an even 100 but it ended up being a pain to gather all this audio and I gave up half way through the process. I’m big on quitting. It’s my favorite and most common practice.

Did you know each of the contributors personally?
I knew most of them somehow, if only through message board or Facebook. There are definitely a couple folks I haven’t met in person. But I know what they all look like. Being sexually attractive was a requirement for the song. No uggos got asked to hop on.

What instructions did you give each of the MCs?
The instructions were, “Two bar verse, must say ‘Space Needle’ at some point.” One rapper failed to say the code word and another wrote a four bar verse.

Where was this recorded?
The bulk of the song was tracked at Undercaste Studios. I held three open sessions that eventually yielded about 30 of the participants. We held another session at my keyboardist’s home studio for another 10 and the rest recorded at home or other studios. Ultimately, we spent about 10 hours on the song, tracking and mixing.

What were those studio sessions like?
The Undercaste sessions were bananas. There were 10 or more people at each one, tons of alcohol, people were screaming, crying, people giving each other tons of shit, gossip. It was a rap frat. And it felt exactly the same as making music for the first time. It didn’t matter if it was good; we just wanted to have fun.

Were there any contributions that you cut?
There was one e-mailed to me that I overlooked and I feel terrible. Shout out to Mike Lee from NxNW! My bad, homie!

Was there any contribution you felt uneasy about putting out there? There is a Macklemore dig by Barfly that stands out.
I am never afraid to put out something offensive to any audience. That line in particular may have cost me a real appearance by Macklemore himself, but I bet he is too busy anyway. It was, however, the official reason he gave for not being interested. It was also very tongue in cheek and delivered by one of my favorite artists from the Northwest, who was also responsible for, in my opinion, the most creative and best all-around rap record from this city. Mack and Barfly are both friends. Barfly is a thinker and really captured the essence of the song in just two short bars. It’s an amazing joke if it doesn’t go over your head.

So, despite the camaraderie you experienced putting this together, you don’t feel that there is any truth to your opening bars?
I start out the song with a bridge and that bridge is ironic. I think songs like this ruin music. The songs stink. Our scene literally needs way less of this crap.