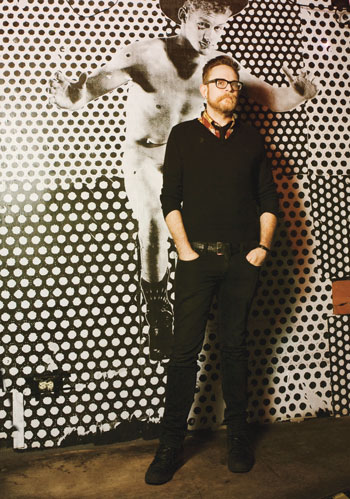 Marcus Wilson has a penchant for parties.

WHO Marcus Wilson has been throwing Seattle’s best parties for the last decade and a half. The 40-year-old musician, owner of iconic bar Pony and co-founder of the ‘MO WAVE Festival was born and raised in Germany as a self-proclaimed army waif. He arrived in Seattle 17 years ago, where he started hosting club nights, rock shows and WTF punk-drag parties like Pho bang, Comeback, Ruff Gemz and Gaybash. Wilson conceived Pony in 2007 when he was offered short-term use of the old Cha Cha space on Pine Street before it was demolished. Intended as part practical joke-part nonstop bacchanalia, Pony caught on, and, in 2009, moved to its present location on Madison in a former 1930s gas station.

DARK PARTY “The decor in Pony is a mash-up of graphic ideas I’ve used over the years in my posters, fliers and decorations for all the parties I’ve thrown, combined with images from dreams and of course my affinity for naked fellows. There’s kind of a spooky quality to it as well that I really like. A customer once described the Pony aesthetic as ‘bath house meets haunted house.’ I think that’s pretty apt.”

EPIC FEST Wilson’s band—sometimes more like a performance art troupe—ONONOS plays around town from time to time, outfitted like undead, Leigh Bowery-inspired punk dandies. His newest collaboration and obsession, ‘MO WAVE Festival, debuts this month across Capitol Hill venues. The festival was conceived by like-minded queer musicians and artists (including Jodi Ecklund, Barret Anspach and Seth Garrison) last Gay Pride Day in the green room of the Funhouse. “The Funhouse had been throwing an awesome queer-punk party every year on Pride day, and it was such a blast! With the Funhouse closing down, we knew we’d have to start something new if we wanted the underground, independent queer music and art scene to have a venue in this town, and that’s how ‘MO-WAVE was born.”