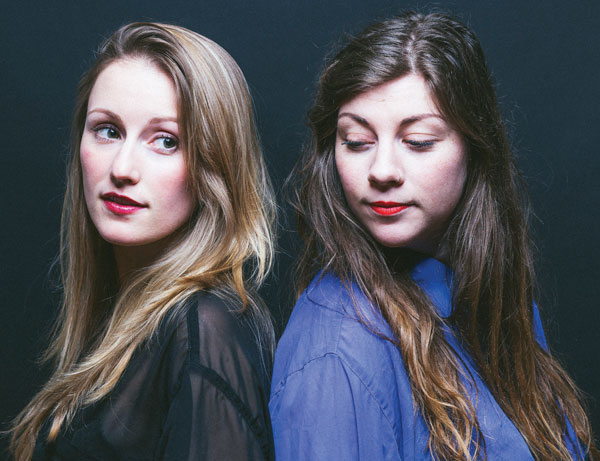 All is revealed when Lemolo has a chat with itself.

It’s been seven years since Kendra Cox walked into Meagan Grandall’s world—clad in neon spandex, bumping a boom box and renting a kayak from the Poulsbo shop where Grandall worked. Since then Grandall, 26, and Cox, 23, have become close friends and started making beautiful pop music under the name Lemolo.

In the summer of 2011, the band released a handful of songs and earned a second look from a few Seattle tastemakers. With the release of its debut The Kaleidoscope last summer, suspicions were confirmed: Lemolo is for real. The band sold out its record release show at the Columbia City Theatre so fast a second show was added. An anticipated set at Doe Bay Fest followed, as did a sold-out Triple Door show for City Arts Fest in October.

Despite their quick rise, the ladies were in disbelief when, during their photo shoot, they were told they won this year’s Best New Music title. Cox’s face slowly opened into a wide smile while Grandall maintained her skepticism for a half-minute. Then they exchanged high fives and hugs. After the photo shoot, we headed to Cox’s new apartment overlooking Lake Union so the two bandmates could interview each other.

Kendra Cox When did you know that this project was real? Was there a show, or a day, or a moment or a time in the studio?

Meagan Grandall Sometimes I still don’t feel like it [laughs]! But I think it was apparent at Doe Bay Fest in 2011. We played in that tiny little yoga studio, and it only held, what, 100, 200 people? We were literally expecting no one to be there. We were begging people to come. And then it was packed and people couldn’t even get in.

KC I remember we had a conversation after that, like, “That was our show!” Then when we played Bumbershoot that year, there were so many awesome bands playing at the same time as us and we sold out the Sky Church at EMP.

MG What’s something about yourself that you’re proud of?

KC I’m proud of myself for deciding to quit school and do this—even though it was scary, even though I knew my parents were gonna be mad, which they were. I think there was always a question in the back of my mind—and now there’s not, because I realize I hate school. [Both laugh.]

What are you proud of?

MG I’ve always been shy and had a lot of anxiety about things I never needed to be worried about. So I’m proud of myself for choosing a career path where I’m constantly on a stage in front of people.

KC Do you miss those days where it was just you, playing your piano songs and your acoustic guitar at the open mic?

MG I’m embarrassed by most of the songs I used to perform [laughs]. But it was also formative for me, and it was really an important part of my life. In a way, maybe I do miss it—the intimacy of the small shows where there was never any kind of pressure.

KC But did you feel pressure then?

MG Yeah, I did. I was freaking out [laughs]. I’m glad things have progressed the way they have. We’re playing together, and the songs I write have a bigger sound.

KC Is there one song you can think of that ended up totally different than your vision?

MG With Lemolo songs, I don’t feel like that’s been the case. I feel like I’ve always had a solid idea of what I want them to sound like. This has been so fun because we’re able to make that happen.

But I’ve played with other people where that wasn’t the case. I played with a guy in college, before Lemolo started. I don’t know if we had even met yet. I wrote all the songs and had this great idea of how I wanted them to be. Then he would completely change them into something else. I remember being so distraught by that. Through that, I realized how important it is to work with people where there’s a dialogue.

Tell me about a time when a song really moved you. The first one that comes to mind.

KC There was this night, the first summer we met, when we did our catering job and then we drove around listening to Björk, and it was one of the first times I had even…

MG You didn’t even know who she was.

KC We had the windows down, and you were singing so loud, and I wanted so badly to seem cool enough to know the words. That night was really big for me.

I have a similar question for you. Can you tell me about the first time you heard one of your favorite bands and what triggered you to go, “I have to listen to more of this?”

MG I remember the first time I heard Elliott Smith. My boyfriend at the time gave me his CD, XO. I was driving home from his place and it was the middle of the summer. It was warm, and the light was coming through the trees and it was really beautiful. The windows were down. I put the CD in and there was this one song that was so amazing. I think it’s because it coincided with that feeling of falling in love, and the lyrics had to do with deciding to go for it, and not holding back and feeling scared.

MG Yeah! Totally cheesy, but I connected with it so much. Okay—if you had an evil twin, what would she be doing right now?

MG Eating up the buffet.

KC It would be really bad. And she wouldn’t be able to stop.

MG What game would she be playing?

That was a good one. So. My name, full name, “Kendra Ellen Cox,” tattooed on your body. Where would it be?

MG Lower back. Old English font. And I would get a portrait of you as a baby. Like, a vignette.

KC Good answer. Next: Say you have $1,000 for a show outfit. You can design it. What would it look like?

MG There’s this vintage store in Poulsbo that I love going to before every show because I always find something cool to wear. And it’s always really cheap. There’s this gold sequined gown that’s long-sleeve and to the floor. It’s amazing. Every edge of the surface is sequined. I would get one of those made to fit me. And maybe a matching headdress.

MG If you were having a hot tub party and could invite anyone, dead or alive, who would you invite?

KC For some reason my first instinct is the Jackson 5. But I think ultimately I would invite Beyoncé and Eve and Missy Elliott. Queen Latifa for sure. It would be all hip-hop ladies. And you would be there.

MG Thanks. What is the one thing you most want to do in your life?

What do you think is going to happen in this next year?

MG I’m looking forward to fresh ideas. The last couple months have been a really vibrant time with me for songwriting. We haven’t been playing a lot of shows and we’ve had time to work on music and experiment. To me that is my ultimate joy. As much as it feels like our album just came out, in a way the songs already feel like they’ve been around for a long time.