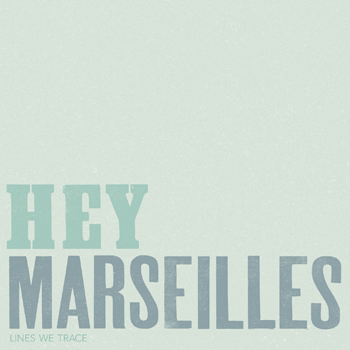 Lines We Trace
Onto Entertainment

The twittering clarinet that begins Lines We Trace, the second full-length album from Seattle orchestral pop group Hey Marseilles, is positively whimsical. Yet any illusion of cheerful ease is discarded with the first line from leader Matt Bishop: “You were my reminder in this colder corner state of the brightness others aim for well outside the gray.” As if in a fable, the whimsy quickly recedes, rarely to reappear again on an album steeped in that gray.

Like Hey Marseilles’ debut full-length, To Travels and Trunks, this album is largely concerned with getting away. The band’s first album delivered pop songs adorned in orchestral pomp. Its lyrics explored romantic strife in distant locales. But, as the title suggests, there was always the promise of coming home again. With Hey Marseilles’ latest release, the stakes have changed: These are not celebratory songs about complicated sojourns. They are tense odes to outright escape.

The escape is, perhaps too often, from city to countryside—a well-traveled trope for the urban daydreamer. The idea of leaving the city behind colors the entirety of the album and is the lyrical pillar of three of the stronger songs (“Rainfall,” “Elegy” and “Building Glare”). Bishop does the subject justice, particularly on the terse “Rainfall,” in which he sings, “The city streets have more than we could ever want or need. We’ll take our march to country sides where real men do bleed.”

It has been a long five years singe the release of To Travels and Trunks. So naturally, the band has refined its musicianship. Its youthful exotic and clumsy romps have been tamed and its dynamics are now more fit to the emotion of the songs. The string section of brothers Sam and Jacob Anderson possesses the lyrical strength to counter and commingle with Bishop’s poetry. Nick Ward’s restrained guitar work delivers jolting stabs and anxious tremolos. Likewise, Philip Kobernick’s essential piano work sets the mood of the band’s pretty but dreary compositions. Drummer Colin Richey, absent from the debut, breaks up some of the band’s problem areas with rumbling, playful drum patterns.

At times the band succumbs to formula, relying on acoustic guitar, heartfelt lyrics and indistinct string interludes to keep the emotion moving. There is a lot going on here instrumentally, and the band’s fondness for building big, multilayered drama at the ends of these songs can be taxing.

Wisely Hey Marseilles built in two breathers, “Madrona” and “Demian.” These two brief instrumental pieces feature meandering melodies on the piano paired with a lugubrious cello and viola. In them, the suffocating crowds in Bishop’s songs about the city fall away and, for a moment, the band achieves escape.