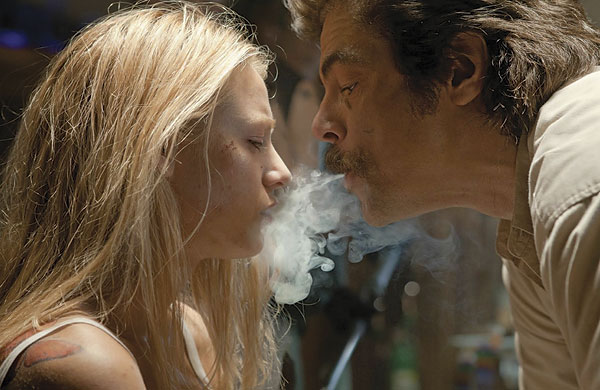 Nov. 6
Your Sister’s Sister
One year after his brother’s death, Jack (Mark Duplass) is still spiraling downward—socially, professionally, emotionally. His best friend (and brother’s ex-girlfriend) Iris (Emily Blunt) recommends a sabbatical at her father’s cabin, where Jack finds Iris’ sister Hannah (Rosemarie DeWitt) reeling from her own upheaval. A bottle of tequila, sharing of sob stories and a whole lot of awkwardness later, they find themselves in bed. The situation is uncomfortable enough until Iris arrives early the next morning, and confessions of an expected and not-so-expected nature follow. Local writer/director Lynn Shelton once again shows her strength in showcasing genuine and flawed moments of human interaction, deepened by the talents of the strong cast. Their story is set against the lovely San Juan Islands, with sleepy sunrises and damp, quiet forests beautifully captured by cinematographer Benjamin Kasulke. JK

Nov. 13
Brave
A refreshing addition to the Disney princess genre, Brave ditched the young romantic and evil witch co-stars of fairyland for more familiar incarnations. Feuding at the heart of this magical adventure is a rebellious teenage daughter and her overbearing mother. With headstrong maneuvering, the charmingly rough-and-tumble princess, Merida, unwittingly creates a rift that sabotages her family and opens her entire kingdom to beastly forces of conflict. Opposing elements of change and tradition are handled wisely throughout, colliding and falling into place with as much mesmerizing grace as the carroty fluff atop the heroine’s noggin. Even more commendable than fabulous hair-styling, Brave breathes life into an archetype that is often stagnantly portrayed: our moral-voiced mother. Be sure to share some popcorn with her. KS

Nov. 13
The Queen of Versailles
There’s a distinct element of schadenfreude at work in this documentary about the financial collapse of one of the world’s richest men and its effect on his oblivious wife. But once you get past that, The Queen of Versailles is more readily an effective portrait of our shared cultural culpability for the massive socioeconomic calamities of the last few years. Blaming our rampant desire for wealth and luxury on some vague notion of an “American Dream” doesn’t excuse the litany of bad decisions executed, both by everyday individuals and corporate or government officials, that led us all down a destructive path. ML

Nov. 13
Savages
Oliver Stone directs this modern crime story of the Yin-Yang partnership of rough and tumble combat veteran Chon (Taylor Kitsch) and peaceful, business-minded Ben (Aaron Taylor-Johnson), who with their shared girlfriend O (Blake Lively, our flighty narrator) live the sweet life in SoCal on their marijuana empire millions. Their peace is interrupted by a Mexican cartel forcing its way onto their turf and kidnapping O, sending the boys on a violent rescue mission. Stone wisely favors action and spectacle over social relevance while keeping his signature “acid-trip” editing style (mostly) in check. But, the movie is stolen by three funny, scenery-chewing performances from Benicio Del Toro, John Travolta and Salma Hayek, reminding you how much you’d missed them (particularly Travolta, who hasn’t been this great in years). KC

Nov. 20
Eclipse Series 37: When Horror Came to Shochiku
Japanese film studio Shochiku is best known for its Tora-san films, but they delved into the world of horror and fantasy in the late ’60s with fascinating results. Perhaps best-known is The X From Outer Space, their goofy entry into the Kaiju (giant monster) sweepstakes. Genocide is a psychedelic nature-gone-amuck thriller with killer bugs and The Living Skeleton is an eerie black-and-white ghost story centered around a haunted pirate ship. The highlight of the bunch is the legendary Goke, Body Snatcher from Hell, a trippy, apocalyptic nightmare about plane crash survivors tussling with sinister space invaders. The four films in this collection from Criterion have rarely been seen in the USA and are all worthy of reevaluation. SH

Nov. 20
Heaven’s Gate
When Michael Cimino’s follow-up to The Deer Hunter was released in 1980, it was dismissed as an insanely indulgent, overlong disaster. Its box-office failure, for all intents and purposes, sunk a studio. Most people never saw Heaven’s Gate but its status as legendarily terrible spread like a disease. But cinephiles have long known of its real qualities, especially its detailed evocation of a historic clash of class, race and money. A uniquely American epic along the lines of There Will Be Blood. ML