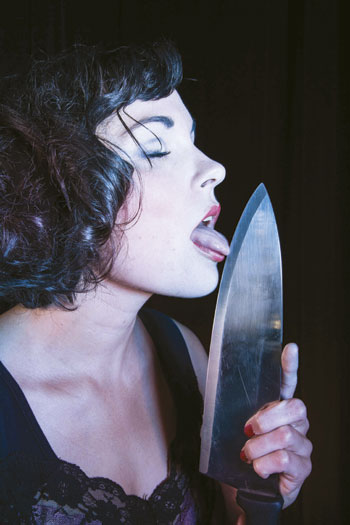 How did Somethin’ Burning come to be?
We were fascinated with small town Americana and we married that with the sentiments of David Lynch’s Twin Peaks. Then I was reading Fast Food Nation about the large agricultural and corporate food industrial complex and that got us thinking about regional foods. There are many regional, local delicacies where people do their pies their own way, and they do their quiches their own way. But franchises and large businesses have such advantages when it comes to money and land and distribution of food products—it creates a homogeneity. “The death of the diner” is what we’ve been calling it.

Because David Lynch is all about changing realities, we’re going to take Americana breakfast and turn it into dinner. Something malevolent happens and there’s a murder.

What do you think is different about this show from all of your past Nordo experiments?
We’ve really hit on a menu that does not look the way it tastes. We’re going to push people’s expectations. They’re going to see something placed in front of them that looks like a coffee and a donut, but that’s not what it is.

What do you think is the most exciting aspect of this show?
We have done probably the best job so far of weaving a story with a menu. It’s our main goal in every show, but I really feel in this one, the writing and the food complement each other in many ways. It’s challenging—we went darker with it, and we went weirder with it.