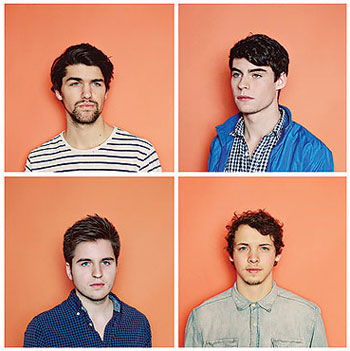 Over the last year, Beat Connection has transitioned from a dormroom laptop duo to a four-man, party-starting machine. Along the way, the Seattle electro-pop outfit has garnered attention from MTV and Pitchfork, landed itself on uber-hip British label Tender Age, and played shows and festivals across the U.S. and Europe. The group has emerged more realized in their house/pop hybrid—one of the new dudes sings, the other drums—and more accessible than ever, as demonstrated on the debut LP, The Palace Garden. We caught up with founding member Reed Juenger at his brand-new U-District home studio.

Your music feels unique to me—an interesting intersection of electronic dance music, ambient electronic and pop.
That’s what we were going for. When we started writing this album, we had the idea of a loose narrative arc explicit across the album that captures different moods. It was important to us to create an ebb and flow in a larger body of songs. What we found is that sometimes that happens in a single song or sometimes within a few songs.

What kind of narrative arc?
The album is called The Palace Garden, and that’s the metaphoric embodiment of a fantastic event or a great moment of your life that you can’t get back to—some night you had with a girl and you never got her number, or some vacation you went on or some childhood memory. Your inability to get back to it, the way you romanticize it—that’s an internal condition, not an external one. It’s coming to terms with that realization.

I totally get that in the music. I think you nailed it.
I appreciate that. We are very conscious of what we’re writing and take it very seriously. Some of us are at UW still. I’m studying digital art and media and I spent a lot of time getting bogged down in the academic side of art, so making something that’s closer to what I experience in day-to-day life is what it’s about. These are the songs, the things that we think about daily.

The song “Further Out” is the first single and is super catchy. But it’s preceded by a minute-long ambient drone. You take the listener further out before giving them the song about going there.
We were trying to unify the lyrics and the music in a song. That song is about the further out you go, you’re simultaneously returning. There’s no end, you just keep going. Then you realize you haven’t actually made any progress, [and are] accepting the fact that none of this is going to make an impact in a way you expect it to. But you have to do it. You have to keep trying.