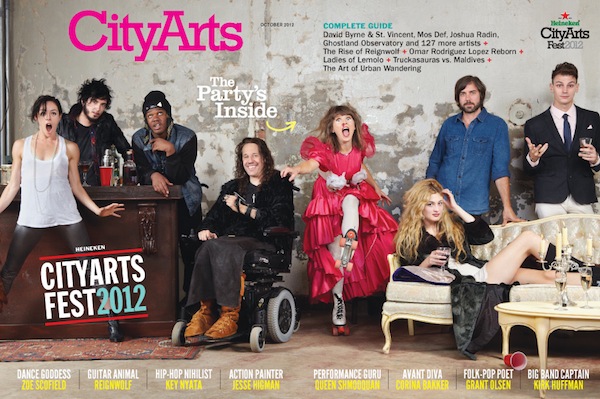 Getting this month’s eight cover subjects—five musicians, a painter, a dancer and a performance artist on roller skates—into a room together was a herculean scheduling cluster. Jordan Cook, aka Reignwolf, was between out-of-town tour dates. Grant Olsen’s wife was due to give birth at any moment. Key Nyata was only available after 3 p.m.; the precocious producer/MC is still in high school.

But on a cool Wednesday afternoon in mid-September, the entire posse found its way to the core of Georgetown’s storied Old Rainier Brewery—a maze of doorways, stairwells and old, unfinished spaces. Set decorator Jennifer Zeyl and her team rolled up with a truck full of furniture and cocktail accoutrements (you may recognize some pieces from last summer’s Intiman Theatre Festival), which our crew puzzled into an ancient freight elevator, along with photographer Steve Korn’s heaps of lighting gear. In just a few hours, an empty room on the third floor transformed into the scene of a fantasy warehouse party.

Last year, most of the artists on our October ensemble cover already knew each other. But this year they were mostly strangers making bashful introductions as they entered the room. After a couple of hours, though, collaborations were brewing among some of the most unlikely pairs: Nyata and Kirk Huffman parted ways hatching schemes, as did Cook and Jesse Higman, who’s been designing posters and painting the leather jackets of local rockers for decades. You never know what will happen when you throw a bunch of artists in a room together.

This hyper-eclectic cover reflects the spirit of this month’s Heineken City Arts Fest, a four-day urban adventure filled with a wildly diverse collection of music and arts events. The photo’s historical setting also echoes with one of the Fest’s most intriguing programs, Topographies of Seattle, a series of art-driven tours that reveal the texture and history of our city (see “Psychogeographique”). The tours are a good reminder that among the many artists at the Fest this year, the city itself is a star.

See you out there,
LEAH BALTUS
Editor in Chief
leahb@cityartsmagazine.com