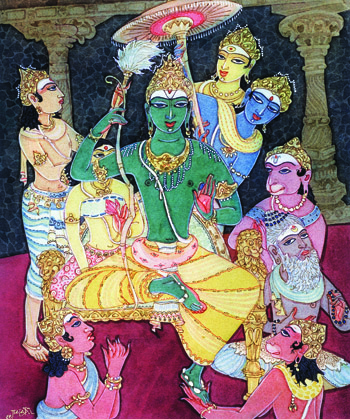 Legend has it that the Hindu sage Valmiki was the first to tell the Ramayana, a 50,000-line poem about Rama, his wife Sita and the epic journey to free her from an evil king. Many have shared a version of the great myth since. This month Yussef El Guindi will become the latest in that long line, along with his collaborator Stephanie Timm, when ACT Theatre stages the duo’s interpretation, commissioned and directed by ACT artistic director Kurt Beattie. The production is a step away from the topical material that has earned El Guindi raves from critics and, most recently, the $25,000 Steinberg/ATCA New Play Award for Pilgrims Musa and Sheri in the New World. But, as El Guindi told us, Valmiki’s words still resonate.

Your work is usually very topical and culturally specific to issues between the Middle East and the West. Why pivot and move to a work that is in such a different time and place?
The art of adaptation is a unique writing exercise, which writers should practice now and again. It broadens the creative imagination – exercises it in unusual ways as one is forced to come up with creative solutions to problems one wouldn’t ordinarily pose for oneself. For instance, I would never in my writing life think to write a battle scene. But there’s an extended one in the Ramayana, which required me to creatively wrestle with the problem.

When did you first learn of the Ramayana?
I knew of the epic, but hadn’t immersed myself in it before the start of the project. The Ramayana, in part, is about right action. About doing the right thing in intolerable situations. It was a pleasure to track the mind-set and mindfulness of the central character of Rama as he attempts to negotiate this world with the divine principles that animate him.

The Ramayana is an epic work. How did you determine what parts to stage?
At one point we were considering doing the play over two evenings. Then that idea was scrapped (perhaps a tad too ambitious). At which point Kurt delineated the parameters of this particular telling. There are many ways to tell this story—tangents and arguments one could include and explore. Our version is just that, a version. One could go in so many directions with this tale. And if there’s a reincarnation of this production down the line with ACT, then I’m sure it will reincarnate in a slightly different form.

Are current events reflected in this telling?
I was aware while writing my sections that the adaptation would be staged during the election season. The epic is also about leadership. What makes for a good leader—something that I knew might be on people’s minds as we entered the election season. This epic also includes a major war. So it was natural to consider and absorb into the adaptation the two wars this country has waged this past decade.

Are you a very different playwright in a collaborative environment?
I think you have to adopt the team mode of thinking in a collaboration like this, similar to working on a TV episode. There’s more collaboration. Speaking personally, I love Stephanie’s style and approach. There’s a lyricism, a poetic rhythm, that gives sections of the play a much needed “otherwordly” boost. Her ability to flex these poetic muscles really helped set the tone of the play.