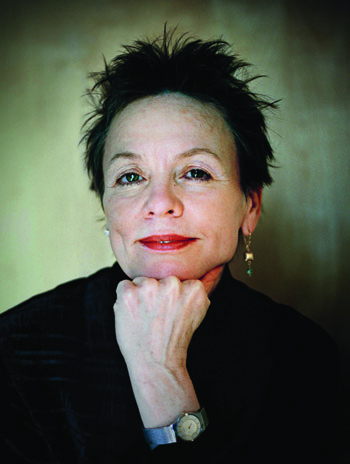 Laurie Anderson’s Dirtday! is at Meany Hall on Oct. 20

For more than 40 years, New York performance artist Laurie Anderson has created art defined not by genre but by inspiration and technology. The result is a body of work that is wildly diverse, with a unified purpose to reflect the world in all its melancholy, disjointed, mesmerizing glory. This month, Anderson spends a weekend in Seattle, performing her latest work, Dirtday!, between appearances at Kane Hall for an informal lecture (Friday, Oct. 19) and the Intiman Theatre for a panel discussion on “the Role of Art in Civic Action” (Sunday, Oct. 21). On the one-year anniversary of the Occupy Wall Street protests, Anderson spoke with us as she wandered the streets of Berkeley prior to a performance of Dirtday!

Dirtday! is the third in a trilogy of storytelling works started in 2002. Did you know what this piece was going to look like ten years ago?
No. I didn’t set out to do a trilogy. That sounds so pompous. For this piece, I originally set out to just do music. And then, as I got involved in Occupy Wall Street, some words came. And then there came some more words. Then came an entire story and then I gave up and decided to make it mostly words with some music.

Is it unusual for you to stray like that?
No. I’m not good at having a plan for a piece and then coming out with a piece that looks even vaguely like that plan. That’s one of the effects of being a multimedia artist. The example I always use of that is that you start making an opera and end up making a potato print. That isn’t a problem for me, but it might be for the organization that commissioned the opera.

What’s the relationship between what Occupy is trying to do and what art can do?
On some level art can create empathy. I think about Bob Dylan songs, where he sings about losers in a very empathetic way. I think that was quite a political thing to do, but as far as whether you can change policy with art, not really easily. But you can change people’s minds with art. I know that has happened to me, as a reader and a listener. But my goal as an artist isn’t to change the world. My goal is to describe it.

You often use advanced technology to do so. Are there themes you can explore today that you couldn’t have 30 years ago?
Yes, there is. One example is something I am working on now that I am just developing for the Kronos Quartet. It has to do with triggering text super fast with music and I could not have done that before. The work is about watching the artist look for meaning, rather than embedding meaning in a work of art. Does that make it a better work of art than a pencil drawing? I don’t know.