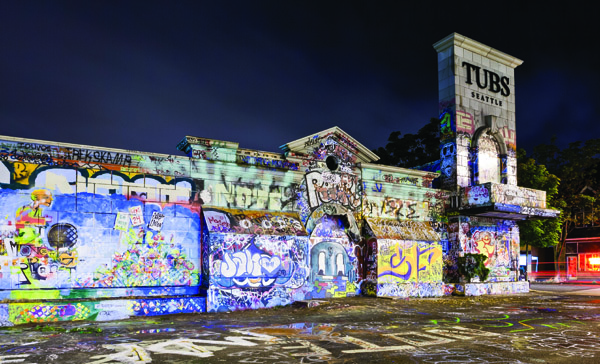 Local artists build on the history of urban exploration to unlock and awaken the city.

I live on Capitol Hill’s Bauhaus block. My apartment is in one of the buildings scheduled to be torn down next June to make way for a mixed-use building. Two months after I moved in, property management left a printed letter wedged in my door explaining the situation. Along with everyone in the neighborhood, I was shocked that even this historic cluster of auto row buildings and beloved boutique shops like Wall of Sound and Le Frock could be demolished and replaced by condos.

The news affected how I perceive my apartment. It makes me look at the space differently, as through it were a curiosity, an object on the verge of extinction. I’ve come to read its surfaces like someone trying to decipher a palimpsest covered with traces of a hundred years of touch, caress and scuff. The studio’s electrical pipes snake around the ceiling, forming illegible runic circuitry. The walls are uneven, with patches and putty filling a thousand holes where pictures have hung. Painted white, they have the texture of frosting on a sheet cake. The old floors are coated with gray paint that chips off easily, revealing glimpses of hardwood underneath. It makes me wonder what kinds of stains and gashes, gouges from furniture, discolorations from food, sex and spills are on the hardwood, hidden beneath the paint. It makes me wonder about history.

When this building comes down, the ghost of it will echo with all of the people who inscribed their essence on this space. I imagine it lingering, like a vague energy clinging in the air, dissipating only gradually over the course of another century.

In 1958, the French philosopher Gaston Bachelard wrote The Poetics of Space, a book describing the psychological impact of architecture. He wrote about the dreams a person dreams while lounging in bedrooms, the memories accumulated in childhood homes. He emphasized that physical, structural space can be designed to hold experience, to stimulate the feverish flow of daydreams, to absorb the essence of minds as well as bodies.

The practice of thinking about space this way can extend beyond the walls of a house and into the city. Streets, outdoor cafes, public parks and historic buildings each possess poetic energy waiting to be discovered and engaged. Understood as a catalyst, architecture begins to contour experience. It becomes the brick and mortar carapace wrapped around a peripatetic, urban dream.

But if you’re going to know a city this way, to experience its poetic nuances, you must slow down. You have to get out of your car. You need to start walking.

For this year’s Heineken City Arts Fest, curator Sara Edwards created a program that taps into the ethos of urban transformation, specifically the transformation and utilization of old, forgotten spaces, both public and private. The festival is “unlocking the city,” Edwards says. “But the ideal is to unlock peoples’ perspectives about where and how they live.”

In 19th century France, the emergence of the modern city and mass culture gave birth to a number of activities centered around urban exploration and the enjoyment of city life. One of these new pastimes was flânerie, which Honoré de Balzac, the 19th century novelist, described as “the gastronomy of the eye.” A flâneur was a person devoted to leisurely strolling city streets, hungry for its sights, sounds and smells. He or she was a dedicated aficionado of urban movement and the pulse of crowds.

A hundred years later, the flâneur’s beloved culture had evolved into something less than romantic, associated with advertising, anxiety and frenzied consumption. The era of copy-churning Mad Men and cookie-cutter Stepford wives required new tactics for engaging a metropolitan culture creatively. The Situationist International (SI) was a new Parisian response to urbanism that developed in the 1950s. Its aim was to radically and poetically subvert the drone culture of capitalism. Theorists like Guy Debord, who wrote Society of the Spectacle and was at the center of numerous artistic and political movements, encouraged throwing off the familiarity of daily routines in favor of exploration.

SI considered cities in terms of “psychogeography,” taking into account both the conscious and subconscious ways the planning and architecture of a city impacted daily life. They were determined to rethink how people move through cities, and, like the flâneurs, they believed it was essential to drift through one’s environment, finely attuned to its atmosphere. They stressed that art and environment should not exist exclusive of one another, that a city’s function and playfulness should flow together. A city’s topography—its entry points, its architecture, its history—would compel continual discovery and ludic play. This was suggested in the design of fantastical maps like Debord’s Guide Psychogeographique de Paris, which shows chopped-up Parisian neighborhoods connected by a maze of red vectors to indicate imaginary connections and emotionally charged routes.

For centuries Paris has served as an icon of a city inhabited communally and imaginatively. Parisians are famous for possessing their city with deliberate aesthetic gestures, protest, public and private pleasures (as simple, even, as eating and drinking on full display in outdoor cafés). Drifting through the city is fully ingrained in the identity of the Parisian. It’s no coincidence that parkour, the sport that treats public places like parks and abandoned buildings as a pedestrian obstacle course, originated in Paris.

Why so much Paris? Because long before gentrification as we now know it, in the mid-1800s, a man named Georges-Eugène Haussmann was hired by Napoléon III to oversee the demolition and rebuild of Paris’s claustrophobic, labyrinthine neighborhoods. The project was massive, controversial and riddled with financial corruption. The imminent rebuild of my Bauhaus block pales in comparison. Yet it created an acute awareness of urban planning and the effect—good or bad—of architectural space and its transformative power over a citizen’s everyday experience, not unlike the urban awakening currently taking place in Seattle.

Seattle is no stranger to rebuilds. Its sunken, subterranean ghost town; the leveling fire of 1889 and dramatic regrades long ago set a tone of urban metamorphosis undergirded by incorrigibly ambitious projects. The skyline is permanently decorated with a filigree of cranes and the ground vibrates with the thrust of gargantuan drills. Are we carried along with the pace of our city’s nonstop transfiguration? Or can we still inhabit it at a more contemplative pace, tune in to its less frenzied vibrations? Can we trace the whispers of the city’s history rather than simply its hysterical howls? 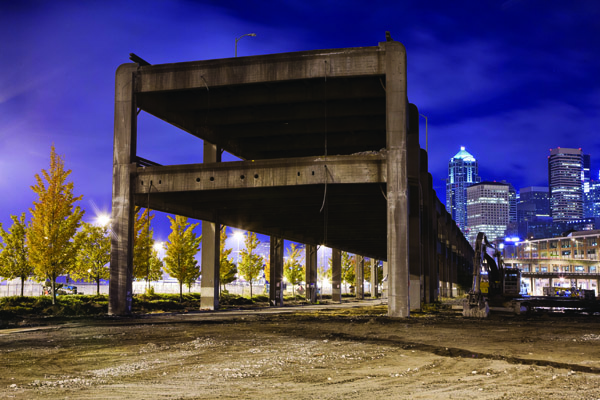 In Seattle, numerous guided tours, walks and other artist-designed experiences have been created to invigorate the city-weary. Klara Glosova’s NEPO 5K DON’T RUN and Susan Robb’s Long Walk are both examples of literal experiments in walking, inviting people to take extended treks (days at a time, in the case of the Long Walk) across unfamiliar terrain, viewing art along the way. These art marathons tap into the spirit of hitting the streets or trails to experience one’s environment in a new way. But, unlike urban drift, their routes are planned. The installations—planted theatrically along the route—are inherently fleeting. The value of a time-based or ephemeral site-specific work differs from self-guided exploration.

Some local contemporary artists have made their work the product of perpetual urban drift. These artists are often the producers of unsanctioned art (tagging, sticker art, wheatpaste, murals), which has become increasingly legitimized in recent years, deservedly recognized as a source of urban vibrancy and identity. Street artists like Banksy and Shepard Fairey are now international, household names. Last year, Jeffrey Deitch brought street art into MOCA with the sprawling retrospective Art in the Streets.

Closer to home, in 2011, Lawrimore Project installed work by an anonymous artist known as “The Reader” in both the gallery and in the streets. (The newspaper bins scattered around town stenciled with the imperative “READ BOOKS!” were his doing.) Sound Transit Art Program’s Capitol Hill Wall Project, curated by DK Pan, has commissioned murals by inveterate local street artists such as Baso Fibonacci and NKO.

Street art is a graphic language of coded messages, a poetic shorthand that uniquely coexists with the architecture of urban environments. Derelict crannies and corners and drab, concrete wastelands are appropriated and transformed, not in the spirit of vandalism, but as a counterpoint to the prevalence of advertisements and corporate signage.

“Until you have a relationship with art, it’s irrelevant or you don’t see it,” says festival curator Edwards. “It’s like advertising—you filter it out. I feel that’s true of art. Sometimes you need an invitation to see it.”

Edwards’ values reflect her roots. She grew up in Pullman, Wash., where she was part of a small Methodist congregation and participated in community choirs and volunteer work. She sparkles when she speaks about nurturing tight-knit communities and shared experiences like the ones she cherished growing up. Her curatorial practice emphasizes building such communities, particularly by transforming old, forgotten spaces into sanctuaries for art and performance.

“This kind of transformation of spaces accomplishes the same end as religious gatherings: contemplation of what it is to be human and to be part of a community,” she says.

The visual art programs at this month’s Fest are opportunities to discover citywide marginalia and public art hidden right under your nose. Seattle’s radical body politic New Mystics, whose members include street artists, designers, tattoo artists and activists, have created a program that encourages urban exploration via bicycle by building a scavenger hunt-like race. Provided with maps of public, street and graffiti art and armed with cameras, participants are encouraged to document their way around the city while learning to decode traces left by street artists and discovering public works tucked away in corporate plazas.

Architect and photographer Aaron Asis is collaborating with artists Cait Willis and Dan Hawkins to scatter QR codes around the city which, when accessed, display unseen images of one’s surroundings, such as photographs documenting the scenery underground or revealing historic or recently demolished buildings.

With the help of performers like Montana von Fliss, Jennifer Zwick and Kirk Anderson, Jose Bold is channeling Bachelard’s Poetics inside a house on Capitol Hill by staging scenes that peek into the spirit realm of the house. Magic toast, insomnia, the memory of lemons and long walks on the beach are a few of the things that may manifest, along with other mysteries trapped within the dream space of the building. Other artists such as chanteuse-marimbist Erin Jorgensen and the dance/video projection company zoe | juniper are throwing parties, performances, dances, dinners and films in secret locations all around town. Only right before the events will participants be told where to congregate.

All of these artists are direct inheritors of the Situationist International’s ideas. They give life to what NKO calls “self-regulating, democratic, visual communities” built on peripheral spaces and fueled by the imaginations of everyday people—people who are drifting through and leaving their imprints.