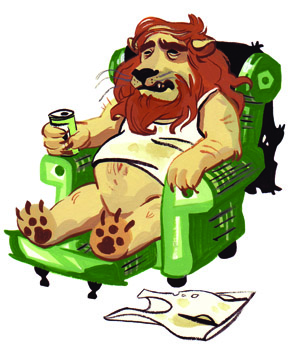 Goat was troubled by the appearance of a familiar car parked in his neighborhood. He passed it every morning on the way to the coffee shop and again at night on the way to the bar. There could be no mistake: It was Lion’s car, a rebuilt Kandy Flake-black 1973 Chevy Nova with a fading White Bryans bumper sticker on the left rear window. There was also a zone parking pass, which meant that Lion must live nearby now. A long-shelved melancholy gnawed at all four chambers of Goat’s stomach.

Lion was Goat’s great romantic rival, the animal who stole his beautiful Gazelle. How long ago that was, and how fresh it seemed now. Lion was, of course, the ultimate alpha. He was the first in their crowd to form a noise rock band, the first to wear a fedora, the first to use a Bluetooth. Goat found himself conducting low-level neighborhood reconnaissance, peering down the street at odd hours, hoping to catch a glimpse of his sworn enemy.

A few blocks away in his studio apartment, Lion stood at the bathroom mirror, preparing for yet another cattle-call job interview, fluffing his mane over the thinning spots. Who ever heard of a bald lion? Soon he’d look like a panther with an overgrown Amish beard. He had five years, tops.

One night on the way to the bar, Goat spied Lion climbing out of the Nova. Goat stepped into the shadows. He looks terrible! he thought. Lion, slump-shouldered and swinging a sizable paunch, lumbered towards his apartment. Goat proceeded to the bar and bought himself a decent Scotch.

When Goat got home, his wife Lesser Kudu (he definitely had a “type”) was half-asleep in bed. The moon lit her haunches, which had gone wobbly with age but were growing firmer these past few months, ever since she started treating Pilates like a religion. She actually looked better now than she did when they met, if that was possible. Goat chuckled and stroked his goatee.

“Say what you will about apex predators, but they do not age well.”