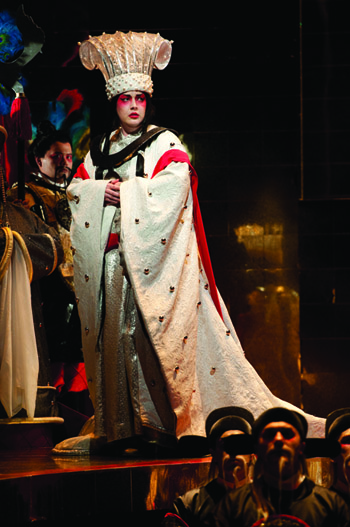 Stonikas’ robe was heavy, about 10 pounds an arm, and portraits of the dead hung in rows on her sweeping sleeves. At first, she sang unaccompanied, but then the chorus and orchestra joined in and she pitched her voice above them in a role that is stratospherically high, sustained and difficult.

Turandot, which ended its run in August, marked Stonikas’ first title role with a major company. At 33 years old, she was young for such a demanding part—and yet it’s one of two back-to-back title roles for Stonikas; in October, she will take the stage in Beethoven’s only opera, Fidelio. The two roles are totally different, both in story and in musical style. Turandot is a cold, bloodthirsty princess who learns to love, Fidelio a courageous woman who infiltrates a jail in male clothing to find her unjustly imprisoned husband.

“Turandot is traditionally perceived as icy, a black widow spider,” says Stonikas, who lives with her son and husband in Auburn. “She has to be heard over 100 singers in the chorus and a full orchestra—and at the same time make it sound nuanced and beautiful.”

To prepare, Stonikas listens to recordings and watches videos of great singers in these demanding roles. She sings between 15 and 90 minutes a day, checking in with her voice, working on a part, often singing an octave below and not at full volume. Once rehearsals start, they’re six hours a day, six days a week for three and a half weeks, followed by several weeks of technical rehearsals.

Stonikas credits her casting in Turandot with her participation in the Seattle Opera Young Artists Program, which works with small groups of aspiring opera singers for nine months, training them in every aspect of the job, with plenty of vocal coaching and performance. Stonikas was in the program from 2009–2011. At the start of her second year, Seattle Opera’s general director, Speight Jenkins, who is known for finding and promoting future opera singers, invited her to audition for Fidelio. A year later she was invited to audition for Turandot as well.

“I felt honored,” she says. “Fidelio is the kind of repertoire I know I can sing, but it was unexpected to be asked so soon [in my career].”

Stonikas grew up outside Chicago in a musical family: Her father sang in musicals, a cousin is a professional jazz bassist, her mother and aunt sang in choirs. But classical singing didn’t occur to her until she arrived at Oberlin College in Ohio.

“I saw this production at Oberlin,” Stonika says. “The lead soprano was like me in build and height, and I thought, ‘She sounds like me too!’ I had no idea until that moment: This is why I don’t belong in jazz or musicals. I belong in opera.”

The young singer had instructors who taught her strong technique, developed her expressive qualities and nurtured her voice. Opera singers’ voices mature late, particularly those with voices like Stonikas’, who are destined by vocal size and quality for some of the longest, largest and most tiring roles in classical opera: works by Wagner, Richard Strauss, and some by Puccini and Verdi.

Pregnancy helped her singing, Stonikas says, by providing a solid mass—her son Henry—against which to support her lungs. Having heard horror stories about singers without enough breath towards the end of pregnancy, Stonikas swam a mile a day while preparing to sing Antonia in The Tales of Hoffmann, which she performed at Virginia’s Wolf Trap Foundation for the Performing Arts a month before delivery. Afterward, she says, “I had to redevelop that musculature. People tell me my voice has matured. My middle voice is richer now.”

Maintaining family life has been a challenge. “I practice while Henry is napping,” Stonikas says. “He’s good at listening to me sing, and when I sing lullabies, he passes right out.”