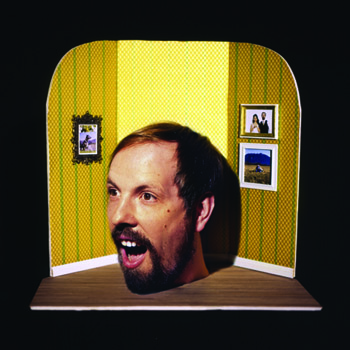 You’ve been to Art Walk. How about Art Marathon? Step up to NEPO 5K—but not too quickly.

Registrants for a peculiar race last September crowded the sign-up table, jockeying for a glance at a list of available verbs. “I want ‘do-si-do’!” someone yelled. Poets Sierra Nelson and Rachel Kessler looked up from their clipboards; “do-si-do” had been taken. “But pick another!”

People received their verbs printed on an 8” x 11” sheet of white paper along with the registration number typical of any race. But the NEPO 5K isn’t a typical race. On the contrary, its organizers beg you to not run.

The NEPO 5K Don’t Run is, in essence, an epic art walk. It requires a definite meander for reasons political (the city wouldn’t grant the appropriate permits for an actual race) and aesthetic. Last year’s inaugural 5K evolved into a surprising event combining art viewing, performance and participation.

Read the word NEPO backwards. In 2009, multimedia artist Klara Glosova was feeling isolated from other artists, so she threw open the doors to her Beacon Hill home, hosting events that collided the worlds of art and domesticity. Gatherings at NEPO House quickly became popular but often drew insular crowds—dancers for a dance performance, film enthusiasts for a screening. Glosova conceived the NEPO 5K in 2011 as a form of outreach to the wider world. A day-long, multidisciplinary art walk catapults people out of their comfort zones while restoring order in the frequently rearranged Glosova home.

Last September, an estimated 500 people rambled from the 5K’s starting “line” in Occidental Park along a roughly three-mile course to the finish line at NEPO House. A map outlined a route through participating Pioneer Square galleries, followed by notations of where walkers (or don’t-runners) might see site-specific sculpture, installations and live performances.

Participants had to pay close attention to make sure they didn’t miss any of the 35-plus experiences along the route. Didn’t look down while crossing the Jose Rizal Bridge? You missed Spider Dance, an insect mating ritual performed by Alan Petty in a multi-limbed outfit designed by painter Leanne Grimes. Too much conversation risked drowning out Josh Peterson’s Tree Map, an assemblage of wind-activated noisemakers that dangled from leaves in a tree along the path. Those who moved too slowly might have missed Amy Ellen “Flatchestedmama” Trefsger’s performance A Good Reminder to Always Sign Your Work, in which she dictated a poem via semaphore, a maritime communication system using flags.

Following a theme of “It’s All Downhill From Here,” the 2012 version of the 5K has flipped from last year, moving backward from NEPO House to a block party with bands, Butoh, food trucks and a beer garden at the International District’s Kobe Terrace Park. To streamline this year’s event, the curators have simplified the registration process. They also spent several Saturdays in May and June walking the route with some of this year’s 60 participating artists.

Glosova is curating the Sept. 8 event along with Sierra Stinson, who runs the one-night exhibition series Vignettes, and Zack Bent, who installed a sculpture called Dwelling in Tents into a hedge for last year’s 5K. The trio wanted to broaden the vision of this year’s walk by introducing new artists. Bent suggested artists he’d known while earning his Master of Fine Arts at the University of Washington—people less visible than familiar participants like Gretchen Bennett, Serrah Russell and Jennifer Zwick. One of those suggestions was Andrew Peterson, whose kids are part of his performance installation Covert Lemonade Stand.

NEPO’s curators are protective of its artistic details, but interactivity is the unofficial rule. Installations, sculpture and other immobile physical art objects along the route will be outnumbered by performance-based works, including one by photographer and video artist Erin Elyse Burns. In a recent video, Burns swept an Eastern Washington sand dune. On the 5K, she’s going to be pushing tumbleweeds along.

Bent speaks of the transitions along the path: the green space, the boulevard quality of the walk, the sudden epicenter of major highway systems coming together, the guts of the city overlooked by a mountain vista.

“The walk has a charm and experience to it without anything going on,” he says. “But all the art brings a heightened awareness of yourself, in the context of this strange day of wandering.”