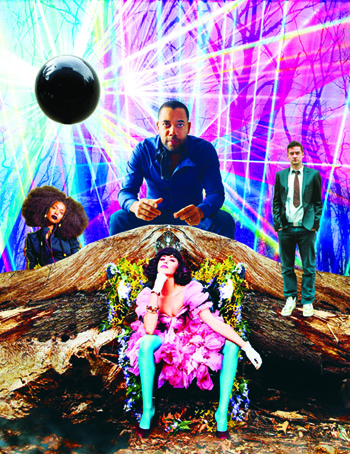 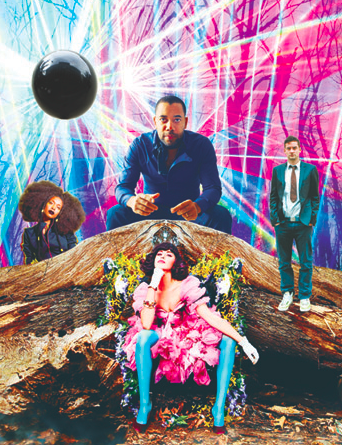 It’s quarter to 2:00 on a Thursday morning in September and 300 or so revelers are sardined into Re-Bar, dancing to uncompromising beats and bass. The sweaty, jubilant throng is one merry, messy mass throwing limbs in every direction. Sporting a Guy Fawkes mask and a black hoodie, British DJ and producer Zomby twiddles knobs behind a laptop on stage, playing sounds like nothing I’ve heard before.

Suddenly it all grinds to a halt. Zomby drains his sound and turns it into mud. Cries of excitement and anticipation shoot from the audience. He waits a beat—a perfect beat—then cuts straight into an Origin Unknown remix of Johnny Jungle’s drum ’n’ bass anthem “Johnny,” teleporting Re-Bar to London circa 1994. Crusty breakbeat hellfire rains down from the ceiling as punches of sub-bass pummel our eardrums. We’re all burned alive, and we couldn’t be happier.

For the uninitiated, a story like this may be hard to comprehend. But across the globe, scenes like these have become ordinary.

The explosion of EDM (the catch-all acronym that stands for “electronic dance music”) is the music story of the year. Electronic music has broken through to a very rock- and rap-heavy mainstream American music culture. EDM festivals at stadia and amphitheaters across the country have filled with leaping teenagers and twenty-somethings in unprecedented numbers. Some of the scene’s most visible stalwarts, Skrillex and Deadmau5, have each had their own Rolling Stone covers within the last six months.

For better or worse, EDM has become synonymous with the more boisterous and sonically vulgar variants of electronic music—the mindless and unimaginative cycles of oomf-oomf that do nothing to push things forward. (See also: rants about “bro-step.”) These artists play massive events like Paradiso and Identity Festival, two bass- and DayGlo-heavy spectacles that filled the Gorge this summer with superstar DJs and their hordes of fans. But comparing those events to Decibel is apples and oranges, chalk and cheese, Martin Scorsese and Michael Bay.

The Decibel Festival is a thinker’s festival as much as a dancer’s. The five-day electronic music adventure brings more than 100 artists to our city every year, displaying sounds of a more nuanced, considered type and tone than the sonic shock and awe of an EDM arena event.

An early convert to electronic music, Decibel’s founder and curator Sean Horton grew up in Detroit, a city instrumental in the birth of new sounds, including techno and other early forms of electronic music. It was there, in 1993, that techno DJs Richie Hawtin and Jeff Mills held their legendary Spastik parties, where Hawtin played his debut live set as Plastikman. These were the first warehouse parties Horton attended as a teenager.

“When I first heard distorted keyboards, compressed drums and weird, ambient sound, it just completely blew me away,” he says. “I became fascinated with the idea of sounds being created that had never been heard before.”

Think about that: sounds hitherto unheard by the human ear. Noise created where there once was nothing, made not from plucking a string or banging a drum, but from an intricate digital tapestry of ones and zeroes. The mutation and metamorphosis of percussive forms of rhythm. These sounds—from the squealingly high to the ribcage-wobblingly low—are what make electronic music so uniquely exciting.

“Any sound imagined can be created,” says Seattle DJ and producer Dave Pezzner, who is one of several local performers on the Decibel bill this year.

New sounds stretch the mind and soul. They take you somewhere new—and yet dancing to a drum is an ancient, primordial response. It’s in our DNA. Indeed, a simple beat inside each one of us is literally what keeps us alive.

These contradictions make electronic music so vital. It’s harmonious and dissonant, ordered and chaotic. Fans find peace there, in sound that is not peaceful. We crane our necks toward the next wave of sounds being beamed from the future while recalling the musical touchstones of the scene’s long evolution and relatively short past. A skilled DJ, like Zomby or Richie Hawtin or Jeff Mills, swirls together the future and the past.

The Detroit parties that inspired Horton were a blueprint for events that unfolded worldwide. “Everyone who was there went on to DJ or produce or promote a similar event,” Horton says. Invariably, experiences like these at groundbreaking, pivotal moments are responsible for the next wave of culture, created by the people who were there.

This heritage explains why the curation of the Decibel lineup is as much an art form as the music itself. Since its inception in 2003 (Horton financed the first festival on his own credit cards—a story of brazen ambition that is now sealed in Seattle music promotion folklore), Decibel has always spotlighted innovators and boundary breakers of the underground electronic music scene.

More than 100 artists—male and female—come from a kaleidoscope of countries. Up-and-coming acts are balanced by the progenitors of their chosen styles. The lineup includes popular, well-known talents but eschews buzz bands who don’t really fit Decibel’s EDM focus. Niche genres are showcased. Shortcuts are not taken. Brand and mission are favored over ticket sales and revenue. As a result, people trust Decibel to deliver.

Current heavyweights Deadmau5, Justice, Simian Mobile Disco and Diplo all played Decibel years ago. Now they play to zillions at festivals held in sports arenas and deserts across the nation. That’s credibility.

And so the annual event has evolved from a few thousand attendees to a record 23,000 attendees last year. It’s expanded from solely smaller club shows to premier venues such as the Paramount Theatre and Showbox at the Market. Part of this growth is due to Decibel’s integrity and part of it comes from the rising tide of electronic music in America.

The big-name performers will be assuredly worth your time, but the best part of Decibel is experiencing the music of tomorrow’s stars in small, intimate venues. Nightly showcases zoom in on subsets of genres and sounds, corralling anywhere from two to eight complementary artists. This is where Decibel’s smarts really shine, where new sounds emerge, where new musical movements are born. Bear witness by hearing the innovations of George Fitzgerald at the Baltic Room, Slow Hands at Melrose Market Studios, Ginz on a boat in the middle of Lake Washington and Seattle’s own Kid Simpl at Barboza.

At its heart, this newness is what Decibel is all about. Witnessing these unprecedented moments, you’re not just a spectator. You inhabit the experience. By being there, by dancing, by interacting with the constant stream of music, by being part of the poem, you become inextricably linked with the art that’s being created.

“Unlike any other art form ever conceived by humans, music brings people together both in a physical and emotional way,” Horton says. “That’s at the heart of why I do this. I almost feel obligated.”

Like the eternal, comforting thud of a 4/4 beat on a kick drum, like the endlessly oscillating warm waves of a synthesizer, like the ceaseless spinning of a 12-inch record on a turntable: By participating, he is part of something bigger.

You too. You are the beat that goes on.