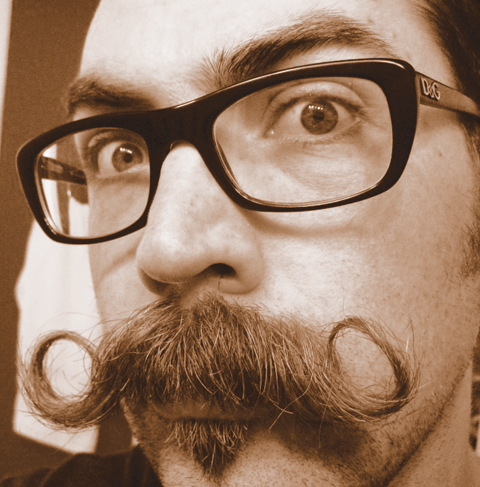 What’s with the novelty facial hair? When did this become a thing to do, festooning your upper lip like a Dr. Seuss landscape, like a cross-section of Coolio’s scalp? Am I on Pike Street, or did I just wander into the casting call for a Snidely Whiplash live-action reboot? Are you the barista, or a 19th century Prussian Brigadier General with a sideline in phrenology?

I get that you’re being anachronistic, but is that really the historical period you think we should be reviving? If so, would you care to accessorize with these steel-and-leather polio braces? Here, have a toothpick, it’s ivory. Hey, Creepy Guy, let’s go grab a tumbler of rum and talk eugenics.

I hate to break it to you, but prevailing attitudes have shifted on stiff, shiny hair shellacked beneath your nose. And besides, it doesn’t make sense from an anthropological perspective: Twirl-able facial hair is a time-honored hallmark of villainy. Along with the white guy yoga topknot, waxed mustaches are nature’s only examples of male plumage being used to signify impotent menace. Is that the signal you’re going for? You’re so meticulously groomed, you get up a half-hour early so you can always have beetle antlers twitching in your peripheral vision.

And where are you getting all this mustache wax? I picture a dusty little wooden storefront with a barber pole, probably somewhere in Georgetown. You push through the swinging saloon doors, and a man in a pince-nez and arm garters sympathetically eyes your drooping, lifeless mustaches. With a flourish, he produces a tiny tin from behind the counter. You pay for it with a Confederate sawbuck and retreat from his gaze shamefully, for you are a man who waxes his mustache in 2012.

Are you growing that Celtic knotwork above your lip to take attention away from your weak chin? Because that’s not working, either. It’s like a pair of steer horns mounted to the grill of a Prius. It’s like chopper handlebars on a moped.

Trust me, it’s not for you. I’ve seen perfectly legitimate waxed ’staches and yours is not one of them. You’re less Sam Elliott, more Elliott Smith. You’re not busting broncs, you’re frosting artisanal cupcakes. Now wipe that smile off your face. No, the other one. The one made of hair.