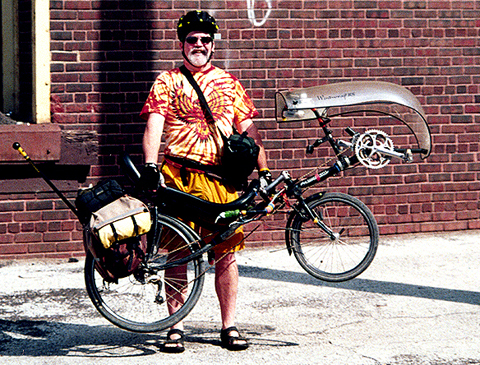 Recumbent bicyclists. Have you seen these guys? Weaving through traffic in those ridiculous contraptions with their little safety-orange flags flapping knee-high to an SUV? Did the inventor of the recumbent bike think to himself, “I love biking, but is there some way I could make it feel more like I’m sitting in gynecological stirrups?” Or maybe, “I like the wind on my face, but I wish I could get my testicles closer to oncoming traffic.” Or maybe, “I enjoy both soapbox derbies and lying in hammocks but I wish there was more pedaling involved.”

Recumbent bicyclists are the Lyndon LaRouchies of the bike world. Their identities are predicated on the belief that they are privy to some secret knowledge that the rest of us choose to ignore at our own peril. That smugness, that willingness to look publicly ludicrous in the service of a delusional idea… Throw in a helmet, a Bluetooth and a graying soul patch and I’m making a citizen’s arrest for attempting to incite a hate crime.

Then there’s fixed gear bicyclists. They’re more tragic than ridiculous. They have no handbrakes and, more importantly, you can’t coast or “freewheel” on a fixed gear. It’s like an exceptionally aggressive spin class instructor who will immediately grind your face into hard, hot gravel if you ever stop moving your legs. By getting rid of the derailleur and bolting the sprocket directly to the rear hub, fixie riders claim to achieve optimal pedal-power transfer, which is exactly what Fred Flintstone thought about the drivetrain in his car.

The fixie is the most efficient pedal-powered mechanism for converting bike messengers into hamburger meat. Fixie riders get off on the purity of it, the stripping away of all the accoutrements to get down to the most elemental form possible, the platonic ideal of “Bicycle.” In this sense, a fixed gear bike is like a Brancusi sculpture. Now you try riding “Bird in Space” down Queen Anne Hill.

And unicyclists! They’re out there, too. I saw a guy on a unicycle the other day, weaving through foot traffic on Broadway. Ridiculous, though I respect the skill involved, because I can’t do what he does. But the hardest part of riding a unicycle down a crowded city sidewalk is not getting enough attention as a child.