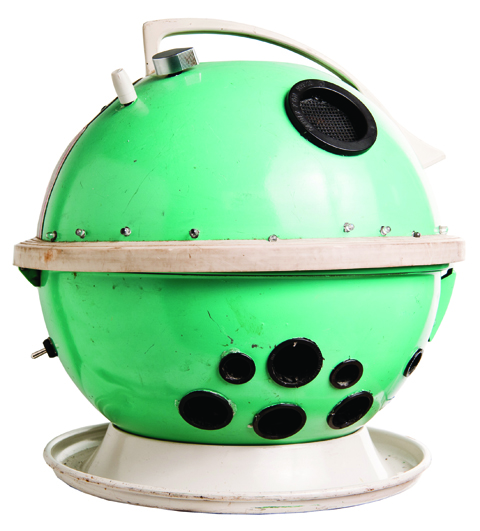 Westcott and his friend and creative partner John Brink treasure every useable bit. This garage is headquarters for their project Scrapblasters—what they call the reclaimed art boomboxes they’ve developed for the last year.

Westcott is a union electrician who found himself out of work last year. He began visiting the Goodwill outlet stores—called the “bins” for the large containers of merchandise that sells at 50 cents per pound—for books to re-sell. Brink, a graphic designer and drummer for the band the Georgetown All-Stars, joined in on Westcott’s near-daily trips.

Forty or 50 people regularly wait for the bins to open at 6 a.m., Westcott says. He and Brink noticed that lots of electronics were routinely passed over, like single computer speakers that can be taken apart into the individual components of a subwoofer, which reproduces low-pitched audio frequencies, and a tweeter, which transmits the highs. Then there are secondary parts like amplifiers and power supplies that nobody wants.

“We knew there was something we could do, make art and musical devices,” Westcott says. “Once the idea came together it was just, what do we put these components in?”

Two of the first items they repurposed were vintage Hoover vacuum cleaners. They hollowed out the guts of the midcentury machines, which look like satellites and UFOs, and inserted speaker systems rewired and reconnected from all those random parts. On these turquoise and mustard-yellow vacuums, they also punched in a ring of multicolored LEDs. The result is a radically reinterpreted sound system that can be hooked up to an iPod, tape deck or stereo receiver. Future versions will have microprocessors embedded so that they can play music through USB ports.

One afternoon in Westcott’s garage, one of the Sputnik-inspired vacuums is playing the 1980 funk jam “Fantastic Voyage,” a song about musical treasure. It sounds great. Westcott and Brink show off other detritus they’ve transformed into bodies for Scrapblasters: metal tube-shaped vacuums, vintage suitcases and an impressive treasure chest-style trunk.

The Bremerton natives “were both ‘pickers’ before there was a name for it,” Westcott says. Today, their takeaway is situational. “We know it’s great to put components in a vacuum, but that market might dry up for us,” he says, in which case they’ll move on to something else.

“My craft as an electrician gives me the skills to punch holes and assemble the parts, and John’s musical and artistic background give him the idea to look at an object and think of its potential,” Westcott continues. “So that’s the fun part: taking this random, free-form art and making something tangible that people appreciate.”

An early customer was a hairstylist friend who purchased Scrapblasters made from a pair of 1910-era leather hatboxes turned into powerful bass and treble cabinets. The devices gained further fans during art walks in the Old Rainier Brewery, where they’ll show again on April 14. Scrapblasters appeal to audiophiles, fans of retro kitsch and upcycling enthusiasts.

Brink displays a Scrapblaster-in-progress, its body an old British physician’s bag. He shows where the sunken control panel, knobs and lower chambers will be. The other materials used in each Scrapblaster, including wood, lighting, brackets and screws, are 99 percent recycled. Whatever Westcott and Brink can’t use, they strip for copper and sell back to scrapyards.

Their operation seems as resourceful as a rotation farm. And these guys have been influenced from seeing excess so frequently.

“It affects me when I go to a store and see crap on the shelves that I know I’m going to see down in the bins in six weeks,” Brink says.

Westcott and Brink aren’t trying to make any political statements, they say. They just notice things. Like a photograph of Amma, the Hugging Saint, and copious dismembered doll parts, among a tangle of cords and wires. Now every time they’re on a buy, they pause to build and photograph a creepy toy shrine. Not everything can be turned into a ghetto blaster.