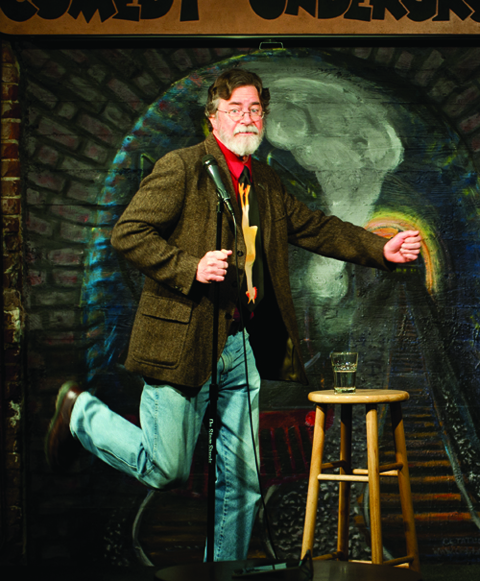 The Comedy Underground bids farewell to its favorite uncle.

A good-sized crowd is holed up in the bunker that is the Seattle Comedy Underground on a chilly March night. People huddle around dimly lit tables to hear almost two dozen local comics pay homage to Carl Warmenhoven, the Underground’s assistant manager for the last 19 years. Warmenhoven—or as he’s affectionately known, “the Ass Man”—is celebrating his retirement. For many people here, it feels like the end of an era.

Since 1993, the showbiz veteran’s been the wrangler, den mother and Master of Ceremonies for the Underground’s weekly open mic nights. Within the brick walls of the club (“For some reason, comedy clubs always need to have brick,” Warmenhoven quips), hundreds of aspiring comics have tried their luck and honed their skills—including respected local names like Last Comic Standing finalist Ty Barnett and San Francisco Comedy Competition winner David Crowe.

Among the wisecracking hordes yearning to be funny, Warmenhoven is Seattle’s supportive uncle, offering helpful pointers and soothing fragile egos. Between the jokes and ribbing, the comics paying tribute to Warmenhoven tonight gush with unabashed love. Comedy It-Boy Emmett Montgomery sums up the contrast of emotions during his set, drily comparing his and Warmenhoven’s predilection for loud jackets and ample facial hair before stating sincerely, “Carl, you did one thing for me that my father never did: You believed in me.”

The week before the retirement show, Warmenhoven sits at Geraldine’s Counter in Columbia City, fresh from babysitting his grandkids. He sips coffee and contentedly munches on French toast while discussing his four decades in comedy.

“I’m not that interesting,” Warmenhoven says with a chuckle. “I’ve just been around a long time.”

He then goes on to share a mother lode of stories that unintentionally refute his self-deprecation, yarns that could only come from a guy whose stock in trade for 40 years has been laughter: Performing stand-up naked in front of 1,500 nudists at Nudestock in the early 1990s. Working alongside Jerry Seinfeld years before his sitcom stardom. Sneaking backstage onto the Tonight Show set with Canadian comic Rick Ducommun. And then there was the time Bruce Willis called Warmenhoven’s house asking his 12-year-old son if he was getting any pussy (long story).

Warmenhoven also chats—quite matter-of-factly—about the minor stroke he suffered in 2011. In true showbiz trooper fashion, Warmenhoven hit the Underground stage less than two weeks after the episode, firing off a hilarious and moving three-minute routine that confronted the incident head-on (“Anybody else give up the use of their left side for Lent?”). The set’s become a minor local media sensation, thanks to the magic of YouTube. In the interim, the Seattle comedy community’s come through in a big way, organizing fundraisers to cover Warmenhoven’s medical bills.

“At one of the fundraisers, I did a list of the out-of-pocket expenses I had,” he says. “One of them was my special therapy sessions with Nurses Bambi and Amber.” The old pro pauses before a gale of laughter explodes from him.

“At the very end—and I didn’t plan to say it—I said, ‘I’m so grateful for you people raising this money… If there’s any more than I need, I’ll give it to Charity. That’s the third nurse.’”