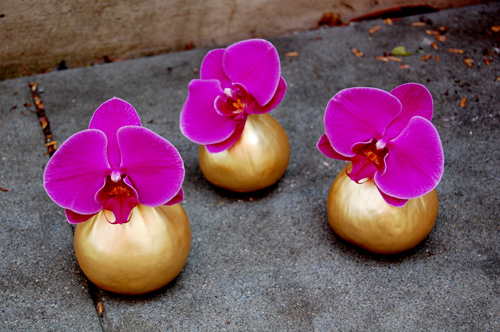 The right arrangement can change everything.

My first job, at age 16, was as a flower delivery girl for my parents. Roses, carnations and Bird of Paradise blooms were transported to our small Florida town from around the world, shuttled between the air-conditioned cars and buildings that kept them alive. With their tendency to wilt and die, I thought flowers were terrible gifts, morbidly symbolic of the fleetingness of love.

Moving to Seattle changed that outlook. The dirt-cheap bounty of fresh flowers available at Pike Place Market was a revelation. I began to view the Alpine-esque wildflowers and tulips from the nearby valleys as affordable, renewable bursts of sunshine for my home. We’re lucky here—in a pinch, we can gather a suitable handful of flowers from the back alley for our table.

Unfortunately, this doesn’t work so well in winter, as a certain romantic holiday approaches, and the professionals must be called in.

“We all need the charm of nature to help us relax from our busy lives, whether it be a walk in the woods or flowers brought into the house,” says florist Megan Mary Olander. Her self-titled shop on Capitol Hill’s Aloha St. perpetually has rose petals scattered on the sidewalk out front.

Olander doesn’t work with what she calls “painfully symmetrical arrangements with their ramrod gladiolus.” She’s one of several local artisan florists who embrace a European style, including Fremont’s Willow & Bloom and Fleurish in the Central District.

The European style is all about simple, lush and full arrangements with one or two dominant colors and elegant greenery (no baby’s breath here). Often housed in small, square vases, European arrangements are as unobtrusive and striking as a well-designed bridal bouquet. Rich but simple, the aesthetic is very popular in Seattle.

Willow & Bloom is known for its work with colorful orchids in the families of phalaenopsis (the most recognized and widely-used variety, with prominent fanlike petals on top) and cymbidium, whose rounded petals are more uniformly sized.

“We use mother nature as our epitome designer,” says Olander. “We just recycle her through the use of color, pattern, texture and dimension.”

In one bouquet of sweet pea, lily and rose, a gradient of fuchsia appears, carrying the eye from the darker top to the lighter bottom. Another mix is so unsaturated in pinks and ivories that it’s more of a suggestion, a dream of flowers. In arrangements like this, the green in a few leaves and unopened buds may be incidental but adds vital depth.

“Our customers leave the design to us; they don’t limit our creativity. Price is usually the only factor, but beauty can also be small,” says Olander.

Though the Market’s budget bouquets of fist-sized dahlias and peonies have been replaced by dried arrangements for winter, Olander and others act partially as “bucket shops,” offering individual stems of both in and out-of-season favorites.

“We try to work predominantly with what’s available locally and seasonally, with small, organic farms, but that does restrict,” says Bush. Pricing for single blooms fluctuates with the seasons, but typical offerings include gerbera daisies at $1.50 each, standard roses at $4 and orchids from $5–$8. Bush says dahlias are available year-round—recently in thrilling shades of orange and purple. Sometimes you just want berries in winter.

“There’s a lot of emotion involved in sending flowers, and I think something we do pretty well is listening to our customer’s situation and being able to create something specifically for that.”

Flowers are hard symbols to beat. Victorian culture prized flowers so much that each genus was given a definition: lavender signified devotion, aloe and marigolds grief, forget-me-nots true love. Each color of a rose or carnation has a specific meaning, and many people follow the red, pink, white and yellow rules of roses to this day. In Asian cultures, peonies symbolize honor, masculinity and bravery; cherry blossoms both feminine beauty and the transience of life.

So the question is not simply whether to bring your sweetheart flowers, but what you want to say with them. Not sure? Plants, cacti and succulents are hardy choices less prone to interpretation.

And getting about as far away from traditional arrangements as possible are air plants and moss balls. Stuff a few into a globular glass terrarium. Like relationships, they’ll last as long as they’re tended.

Pictured above: Orchids by Willow & Bloom.