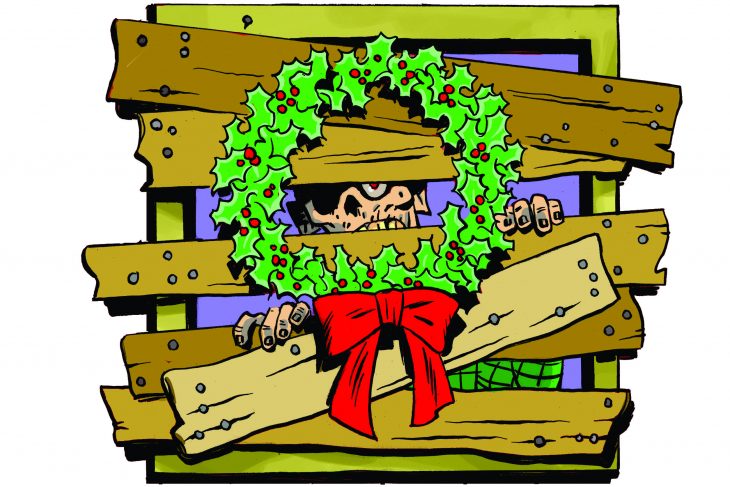 How does a brain choose which memories to keep? Why do people retain thirty-year-old movie quotes but forget life-changing epiphanies? You can order yourself to treasure a moment, to cling tight to a feeling and never let it fade, but it’s your brain, that three-pound lump of hamburger, that makes the final call. It may hold on to the name of your childhood pet, the comforting spice of your father’s cologne, the cola-and-Carmex taste of your first kiss—or it may replace all that with a catchy Christmas song.

Why can’t we manage our own memories? Does some part of us feel we can’t be trusted with such precious records? These are the things I think about when I’m opening people’s skulls. When I’m eating what they hide inside.

I’ve noticed that memories move. The powerful ones flee deeper into the brain as I consume it, leaving the weak ones flopping on the surface. This makes the first few bites fairly mundane. Soldiers cleaning their guns. Civilians digging through debris. Children playing hopscotch, digging through debris, cleaning their guns. I might as well spit those ones out. I could make such cheap memories myself if I wanted to, even after I’ve rotted to bones. Some of us are content with any taste of human life, no matter how dry. Some are willing to kill a man for 30 seconds of him watching television. The ethics of eating people are blurry at best in the fog of my undead amnesia, but I expect more for such a high price. What I want are the moments I will never have. The warm ones. The living ones. And it’s never until I’ve chewed through those rubbery layers of triviality and years-thick crusts of detachment that I finally get what I came for.

This is my first winter. I know it’s winter because there’s frost on the ground. Oily brown icicles hang from the roofs of bombed-out buildings. Ice on car windshields hides the corpses of drivers. I don’t feel the cold, but if I don’t keep moving my tissues will freeze and that’ll be the end of it. Either I’ll stay frozen until I starve or I’ll try to walk, my legs will snap, I’ll fall over and shatter like a porcelain statue. I’ve seen it happen. A lot of us have been full-dying this winter. There aren’t many Living left to eat. Maybe eventually winter will finish our job for us and end the world in ice instead of blood. I think I’d prefer it that way. I imagine a final moment when the last man and the last monster lie slumped in an alleyway, both frozen, both starved. They look at each other, they groan, they finally commiserate.

It’s been a hard year. My first day as whatever I am was sometime last spring. I woke up next to a river. Its rushing was the first sound to reach my freshly scrubbed mind. The first sight was a blue sky full of birds; the second, a woman’s half-eaten corpse lying next to me in the grass. Maybe it was my wife, maybe my sister. I didn’t know or care. I stood up. I looked around. I was no one and nothing. I started walking.

Things have gotten better since then. My mind has cleared a little; I’ve regained some instincts and associations, echoes of the Living world if not actual memories. Those I still have to steal. But I’ve met other creatures like me. I walked in on a small mob of them in a coffee shop; they were killing some people. I helped a big bald one bring down a man with a gun and we shared his memories—dull to the last bite, mostly just about being a man with a gun. The bald one led me back to the abandoned airport where they gather, we exchanged a few grunts and syllables; I guess we became friends, if those still exist.

There are probably a few thousand of us at the airport now. We stand around in crowds, we bump into each other, but it’s hard to call us an army, much less a society. Our skeletal elders sometimes lead us in group activities: strange, silent pantomimes of church services or political rallies that usually end with us all rushing out to commit a massacre, but it’s hard to call us a community, much less a family. Those are concepts we’ve lost all use for. Even as I think them, the words lose their context, dissolve into grains of absurdity in the vast ocean of day-to-day hunger.

Especially “family.” The only time I understand what a family is is when I’m eating one. When I can move from a father’s brain to his son’s, from a brother’s to his sister’s, feel all the resentments mingling with loyalty; the envy and anger with stubborn, tenacious love. It’s a wonderful experience and a rare one, but I get it more often around the holidays, when families foolishly corner themselves all in one room, letting the warm glow of their candles and the scent of roasted turkey creep through their boarded windows, calling out to me as I wander the icy streets.

I look up and listen. I hear them laughing. I hear them speaking in those lovely, unbroken rhythms, building the kind of memories that hide in the brain’s innermost folds. I’m alone, stumbling through the city in the dark, trying not to let the night freeze my blood. As I stare open-mouthed at the light flickering from the window, a snowflake lands on my eyeball. Then another on my tongue. Some part of me remembers what snow is, but this is the first time my new mind has seen it. It softens the crumbled sidewalks and turns rusty rooftops white. It’s beautiful. It crunches under my feet as I move toward the house, longing to understand.

Seattle writer Isaac Marion’s debut novel Warm Bodies is a post-apocalyptic love story with zombies. Love Marion’s work? Check out Mark Baumgarten’s profile of him from Jan. 2013—and find out what led him to write Warm Bodies and what he’s planning next!