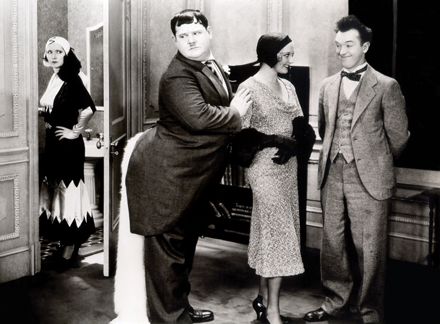 Oct. 11
The Tree of Life
Terrence Malick’s Palme d’Or-winning film The Tree Of Life is essentially a story of self-awareness—both that of the Universe (or God) and that of a young boy growing into a man. It takes you from creation to the final dark moments of all time, and from the boy’s birth to his death. It is also about the simultaneous love and fear shared between a creator and his work and between a parent and their child. It’s completely unlike any other film you’re likely to see all year, if not ever. ML

Oct. 18
Kuroneko: the Criterion Collection
No matter the culture, black cats seem to have a special place in folklore and superstition. Director Kaneto Shind’s 1968 film Kuroneko (literally “black cat” in Japanese) uses foreboding feline imagery to its advantage in a beautiful, quietly paced, eerie ghost story packed with revenge and death and set in politically unraveling 14th-century Japan. The photography and editing of Kuroneko make this spectral tale unique in the long history of Japanese supernatural stories. Criterion’s perfectly timed release of this 1960s treasure makes it a great choice during the spooky Halloween season. Looking for more? Try Onibaba, Shindo’s 1964 ghost story, or Ugetsu, directed by Kenji Mizoguchi; both are also available through Criterion. PF

Oct. 25
Laurel & Hardy: the Essential Collection
Slapstick comedy fans rejoice! The funniest stuff by the funniest guys is together for the first time ever on domestic DVD. This 10-disc set contains most of the shorts and feature-length talkies the singular comedy team made for Hal Roach Studios between 1929 and 1940, many of which have been out of public circulation for years. As a bonus, a few international versions are included. In these rarities, Stan and Oliver deliver their dialogue phonetically in Spanish and French. Laurel and Hardy are overdue for revaluation and renewed appreciation. SH

Oct. 25
Barney Miller: The Complete Series
Besides having one of the coolest theme songs ever, Barney Miller set a high water mark for sitcoms and incorporated all sorts of intellectual themes, colorful characters, precise acting and unexpected drama within the tight confines of a Greenwich Village police station. This set includes all eight seasons of the show as well as the previously unaired pilot episode, the first season of Fish (a spin-off based around Abe Vigoda’s character), audio commentary tracks, newly produced bonus features (including interviews with some of the cast) and a 32-page commemorative book. SH

Oct. 25
The Conversation
The Conversation coming to Blu-ray is cause for celebration. Francis Ford Coppola’s 1974 story of a surveillance expert caught up in some nasty business he doesn’t understand is arguably his most complex film and relies on so many aural and visual cues that the high definition upgrade will only enrich this fascinating masterpiece. It’s also one of Gene Hackman’s most interesting roles in a career of many, and Robert Duvall’s single scene—in which I don’t even think he utters a word—is chilling. The Blu-ray is packed with relevant extras, including a commentary by editor and pioneering sound designer Walter Murch. Oh, and the film is filled with wonderful character bits from John Cazale, Allen Garfield, Harrison Ford, Cindy Williams and Teri Garr. MS