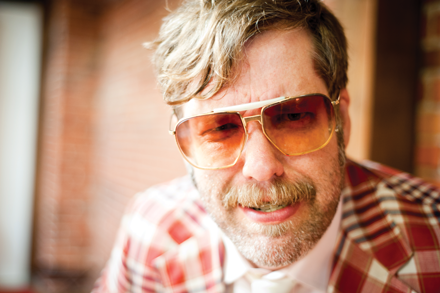 It’s been five years since John Roderick released an album with his band the Long Winters. For fans of the Seattle native’s lyrical wit and propulsive, hyper-melodic pop, it’s been a long wait made both more bearable and more befuddling by the 43-year-old musician’s inescapable presence. In this time, Roderick has helped other Seattle musicians in the studio, fathered a child and transmitted his every waking thought to nearly 13,000 followers on Twitter.

It seems that you are always working on something aside from the next Long Winters album. You’ve helped BOAT out with their next record, appeared on various podcasts, are taking care of a baby, you update your Twitter account obsessively, and attend photo shoots in garish clothing. If you had time to add one more thing to that list, what would it be?
I would pursue some money-earning activity. None of the things you mentioned pay me a cent.

And what about that Long Winters album? Is there any hope for it?
Absolutely. But I’m not motivated by the frantic release schedule of careerist music-industry types. I’m too old to be panicked into rushing out a new record just to keep my name in the papers. When my record’s finished, I’ll put it out.

Will the Long Winters be putting one of those out soon?
I will definitely be putting out 10 tweets soon. Watch for a special download code!

What is the last thing that you wrote that you didn’t share with the entire world?
A list of names of all the people I’m going to kill.

Will you share it with us?
I want it to be a surprise.

I understand that you’ll be performing as part of the Replacements All Star Tribute. What is your fondest memory of the band?
I saw the Replacements once, at the Paramount back in the day. they were fucking terrible.

What is the greatest love song ever written? Why?
“God Only Knows” by the Beach Boys. It speaks for itself.

What is the greatest hate song ever written?
“How Do You Sleep” by John Lennon.