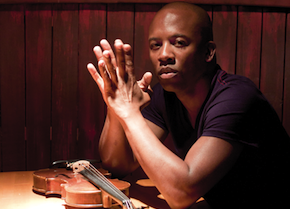 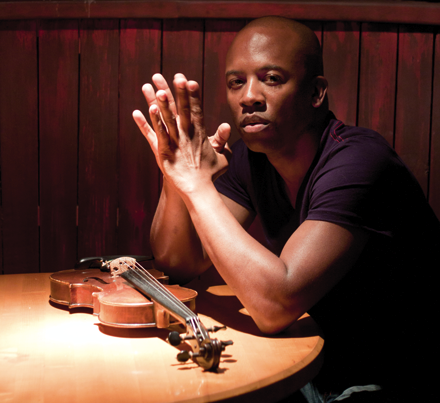 The Northwest’s newest classical music star has arrived—globetrotting from one big gig to the next in New York, Paris, Chicago and Cape Town. He is Quinton Morris: violinist, professor, anomaly.

This fall, Morris is gearing up for the biggest performance of his life—a solo concert at Carnegie Hall next January—with a series of local performances that will offer a taste of what he has in store for New York.

Sitting inside Capitol Hill’s original Victrola Coffee in a T-shirt and jeans, Morris, 33, drinks tea and gushes about his love of hip-hop, jazz and basketball. His eyes are warm and bright, voice soft and kind, as he describes what it was like to sell out Carnegie Hall last winter (“amaaaaaazing”) in a performance with soprano Indra Thomas and pianist Maimy Fong.

“Sometimes I ask myself, if Beyoncé had to sing this piece, how would she do it?” Morris says. “And then I try to play it that way.”

Which makes sense, Morris points out, given that the violin is the closest instrument to the soprano female voice. “Playing fast, witty pieces can be fun—but it’s really the slow, ballad-like pieces where you have to make the violin sing.”

Born in Illinois and raised in Renton, Morris picked up a violin for the first time at age 8 at the encouragement of a friend’s orchestra teacher. After high school, he headed to Xavier University in New Orleans, taking pre-law courses and studying violin on the side. After graduation, Morris took a few fated chances that led to a conservatory audition and a pedigree from North Carolina School of the Arts, Boston Conservatory and, finally, the University of Texas at Austin.

Morris, who won a 2011 Seattle Mayor’s Arts Award, returned to Seattle four years ago when Seattle University hired him to create a one-of-a-kind music program that caters specifically to strings, voice and piano performance majors. He juggles his university obligations alongside a rigorous international performance schedule and leadership of the Young Eight, an accomplished touring octet of black string players that Morris founded in 2002. Morris himself is one of very few young black concert violinists in the world.

“I think it makes people listen more to what I have to say,” he says. “It gives me a chance to change the way people think, to be an example of what’s possible.” LEAH BALTUS

Passion, lust, obsession, jealousy, murder: you name it and it’s in bizet’s classic opera about a femme fatale.

Carmen, a gypsy working in a Seville cigarette factory, expects every man to fall for her. Sexy, alluring, it’s the conquest she enjoys, not devotion. once she wins the adoration of the soldier Don Jose, she loses interest and goes on to her next fancy: the flashy toreador Escamillo. Don Jose—who went AWOL, then to jail for her and found himself forced to join a band of smugglers—can’t comprehend her callousness. Carmen can’t understand his fury and despair. Disaster ensues.

You’re likely to recognize the “toreador” song, and Carmen’s sultry, siren aria, the “habanera,” but there’s more to the music than these two moments. the chorus carries the story along with townspeople and factory girls, gypsies and smugglers, plus flamenco dancing and fortune-telling.

Seattle opera has two Carmens alternating in the role, the polish Malgorzata Walewska (who sang a memorable Judith in Bluebeard’s castle here a couple of years ago) and georgia’s Anita rachvelishvili, making her debut in this production. PHILIPPA KIRALY 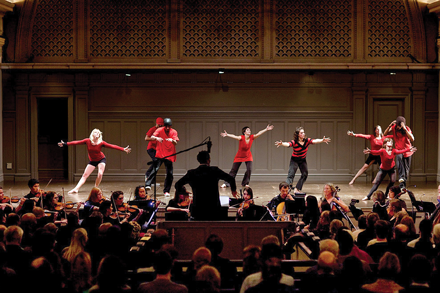 Evan Flory-Barnes stands at the crossroads of disparate disciplines. A tall, relaxed figure with an easy smile, the 32-year-old bassist and composer spent his years at Garfield High School playing in hip-hop groups and studying classical music. As a student at the University of Washington, he followed his passion into jazz. On Seattle’s live music circuit, he has played it all, inspiring contemplative concertgoers, B-boys and modern dancers alike.

Currently Flory-Barnes anchors Seattle’s most adventurous weekly jazz event, the Hang at Lucid Lounge. There, he and select bandmates improvise for the entire evening, setting the stage for any vocalist, horn player or tap dancer who wishes to join in the show.

This fall, Flory-Barnes sets down his bass and picks up the baton for two performances of his nine-movement orchestral work, Acknowledgement of a Celebration. Created two years ago in conjunction with the Earshot Jazz Festival, Acknowledgement features 35 musicians and 10 modern and break dancers. The music nods to the orchestral works of Ravel and Debussy, as well as music by A Tribe Called Quest and De La Soul. The goal, says Flory-Barnes, is about more than expression; it’s about uniting the city’s artists behind one grand purpose. MARK BAUMGARTEN

The Rite of Spring

“I want to create concert formats which will interest young people,” says Ludovic Morlot, 37, Seattle Symphony’s incoming music director and one of the world’s most exciting young conductors.

Igor Stravinsky’s The Rite of Spring caused a riot at its premiere in Paris in 1913. It accompanied the ballet of a pagan rite: A young virgin, chosen by her tribal elders, dances herself to death in a frenzy to propitiate the god of spring. The audience was outraged then and the score of the music has continued to excite, amaze, thrill, even shock audiences ever since, though the original choreography by Vaslav Nijinsky disappeared somewhere along the way.

Pair The Rite of Spring, as Morlot has, with An American in Paris, an urbane evocation of Paris streetlife by George Gershwin (whose opera Porgy and Bess recently ran at McCaw Hall to rave reviews). Written 15 years later, it’s the antithesis of Rite: the one wild and primitive, the other calling up the image of a dapper American in hat and spats strolling jauntily down a Parisian avenue hearing traffic and other street noises. Thirdly, Morlot programmed Ameriques by Edgard Varese from 1921, a Frenchman’s view of the USA.

Morlot says Gershwin is the link between Stravinsky and Varese. “He’s close to both in some ways,” he says. “It’s all about rhythm. The common theme is violence about the birth of something: violence in Rite leading to spring and rebirth, not dissimilar to the violence in Ameriques where Varese is pushing the limits of orchestra sound. It should be provocative. I kind of expect the audience to be a bit puzzled.”

Whatever it is, it won’t be dull. “You don’t have to know anything about [classical] music to be moved by it,” says Morlot.

Morlot, who regularly conducts the New York Philharmonic and Chicago Symphony, is in town for six weeks at the start of the season. In that time he will direct an opening gala, a free Day of Music in and around Benaroya Hall, a program featuring the music of Frank Zappa and Beethoven, The Story of Babar for kids, a free concert at Seattle Center, and the Stravinsky, Gershwin and Varese program. PHILIPPA KIRALY