Skip to content
ADVERTISEMENT
SuttonBeresCuller Artists SuttonBeresculler take a break from their OtB residency at the Sitting Room, Lower Queen Anne's artsy French café. Photo by Janae Jones. Three disheveled businessmen stranded on an island floating next to 520. A mobile... 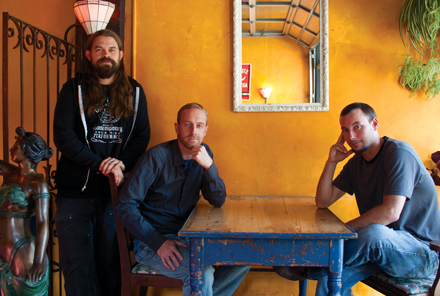 Three disheveled businessmen stranded on an island floating next to 520. A mobile trailer turned into a park with real grass. Bright red tension straps holding together a pair of empty homes on Capitol Hill. John Sutton, Ben Beres and Zac Culler are known for creating memorable installations.

The trio of provocateurs is now in the midst of a two-month residency at On the Boards that culminates in a show this month. What kind of show it will be, exactly, remains to be seen.

“This project was a chance to inhabit and respond to the space, to play with the way people navigate a theatre,” Sutton says, careful not to give away too many secrets about the project. “The audience isn’t going to sit and watch a show. It’ll be more active and social.”

Sutton and his collaborators are having a beer at the Sitting Room, a French café next door to OtB, where they’ve been working all day. “In any other space we would have built and built and built,” Beres adds. “But we didn’t want to do something scripted that we would rehearse again and again.”

This time there is no real plan and there are many unknowns. The performers and materials for To Be Determined are being sourced entirely from Craigslist. The actors will rehearse their individual bits, but they will never actually run through the entire show together before opening night. Even then, SuttonBeresCuller are encouraging them to take chances and change up their performances for each new audience.

Culler, Beres and Sutton began collaborating in 2000 when they were still students as Cornish. Now they are teachers at Cornish with an impressive resume of several dozen exhibitions, commissions and public artworks—a range of sculptural performances, stunts and more formal installations.

“This project is a fantasy,” Beres says. “After all, it’s all to be determined.” LEAH BALTUS

Luminous: The Art of Asia

Japanese kimonos, Korean pojagi (decorative wrapping cloth) and Tibetan thangkas (silk paintings with embroidery depicting Buddhist deities or mandalas) are a few of the more than 170 treasures showcased in this expansive exhibit. They’re normally safeguarded in the Seattle Asian Art Museum at Volunteer Park, a fittingly minimalist Art Deco palace of cool silver and green, built in 1933. (SAM’s permanent collection has its roots in Asian art; founder Richard Fuller and his family were avid enthusiasts of art from the Far East.)

A selection of works from this unique and prized collection recently toured Japan, where they won great praise in Tokyo and beyond. To celebrate their return to Seattle, SAM is mounting this special exhibition—and this will be the first time the museum will feature its own Asian art collection in such a major exhibition downtown.

The variety is staggering: Chinese bronzes, South Asian sculpture and painting, ceramics and photography share the space with a site-specific installation from contemporary Korean artist Do Ho Suh, whose tremendous sculpture “Some/ One,” a coat fashioned of dogtags, is an impressive fixture in SAM’s contemporary galleries. Do Ho Suh is known for questioning notions of cultural and temporal displacement in his work, to great effect.

He is creating a new piece for “Luminous” that explores the negotiations between past and present in Asian art. Old or new, these works do tend, as SAM puts it, “to resonate with a power and energy that transcends historical place and time to communicate directly with us.” RACHEL SHIMP

September rocks: You’ve got the double-issue of Vogue, the incoming breeze and the start of Fall Arts Season (yes, it’s an all-caps occasion). First Thursday falls on the first day of this month—an auspicious beginning.

Housed in the Tashiro-Kaplan building on the axis of Pioneer Square and the International District, the SOIL cooperative is a must-stop gallery on the trail, and this month’s Islands exemplifies why. Painters Susanna Bluhm and Cable Griffith present new work on the title theme, referencing islands as places, metaphors and microcosms.

Your own associations with them may appear as you observe the colorful landscapes: a place to relax and retreat, a crippling loneliness, or as in the film Solaris, an island of memory. Some of Bluhm’s previous work, named after lyrics from the Nina Simone song “Wild is the Wind,” is spare and sentimental. Griffiths’ acrylics complement hers perfectly. His imagined topographies look like Super Mario-style magical worlds; budding flowers and tree stumps are both topped with concentric circles resembling regenerative, multicolored blood cells. There is life pulsing through this art. RACHEL SHIMP