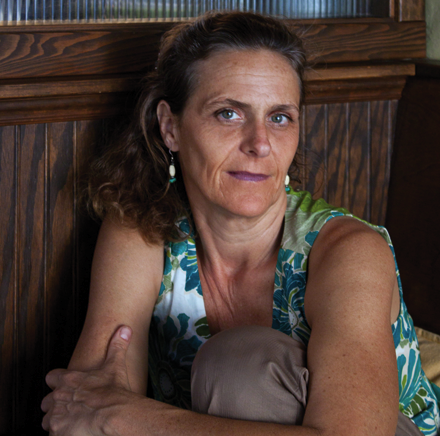 This season’s journey into the Bard’s fairy forest goes deep into the play’s wildest and most unnerving territory to shed light on the remarkable things people do when they’re in love.

Reginald André Jackson and Amy Thone anchor the cast as Oberon and Titania, the fairy king and queen. Jackson and Thone have done Midsummer’s together before (in other roles) and this production marks the third collaboration between Thone and Daniels. “Amy’s skill with the language is unbelievable,” the director says. “She is utterly fearless—totally unafraid to make uncomfortably vulnerable choices.”

As a performer, Thone is a riveting, mysterious live wire. Yet, she confesses that Titania’s hyper-sensuality is an intimidating, exciting challenge. “Sheila suggested I take a Brazilian dance class,” she says, laughing.

Midsummer’s is, after all, a love story full of challenges between fathers, daughters, mistresses and lovers—a fact Daniels has underscored by casting a woman in the role of Lysander, whose love of Hermia represents the play’s forbidden relationship. “I just want it to be about two people who love each other,” she says.

Though the play is more than 400 years old, its characters and stories remain challenging, vivid and relevant to today’s world. Says Daniels, “You have to speak to the time you’re in.” LEAH BALTUS

Circle Mirror Transformation is a play about strangers who change each other’s lives. Annie Baker’s stark, dark and hilarious script, which premiered in 2009 and has since won heaps of fancy accolades, unfolds in a small-town adult drama class.

“It seems kind of like Waiting for Guffman, a satire of us theatre folk,” says director Andrea Allen, who also directed Speech & Debate at Seattle Rep in 2010. “But really it’s not a spoof—it’s a very real, naturalistic look at five people who are at crisis points in their lives.”

Those five characters—a divorced carpenter, an aging actress, a teenage girl, the instructor and her hippie husband—endure a series of absurd, vulnerable exercises: lying on the floor, pretending to be trees, reciting confessions. Along the way they build meaningful, if unlikely, relationships. “This play speaks to the power of the arts to be transformative, to help us see parts of ourselves and others that we don’t get to see everyday,” Allen says.

She also acknowledges that the play’s 30 blackouts are a bit daunting and that staging is difficult on a dance-studio set that includes a wall of mirrors. Baker, the playwright, knew the script presented challenges. In her published author’s note, she says, “Please heed the pauses and silences in this play… Without its silences, this play is satire, and with its silences it is, hopefully, a strange little naturalistic meditation on theatre and life and death and the passing of time.” LEAH BALTUS

This American classic depicts our nation’s rivaling passions about evolution, censorship and McCarthyism that are as poignant today as they were in 1955.

Strawberry Theatre Workshop’s production features Seattle stage stars todd Jefferson Moore and reginald André Jackson as the celebrity lawyers in its reimagining of the 1925 Scopes “Monkey” trial of the Century. This “trial of the Century” ultimately secured evolution’s place as a subject in the American public school system, fueling the polarities between science and religion that still burn through American politics today. 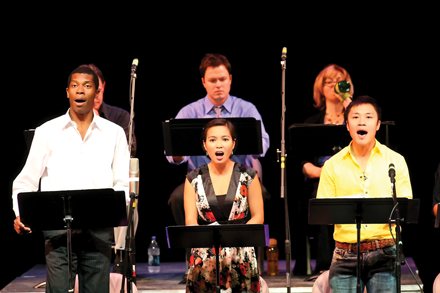 A 2009 reading of Take Me America at Village Originals Festival of new Musicals. Photo by Sam Freeman.

If, as in politics, empathy is the foundation of a winning performance, this musical is set up for success. Take Me America aims to lend understanding to its misunderstood characters, seven foreigners seeking political asylum in the United States and the agents who assess the worthiness of their claims.

The play is written by Bill Nabel—the son of World War II-era Polish asylum seekers and a veteran Broadway actor—with authority, energy and levity. Nabel teamed up with composer Bob Christianson, who provided a rock ’n’ roll score that mixes high-caliber entertainment with the playwright’s tale of refuge.

The production has received rave reviews from New York’s Midtown International Theatre Festival, was a finalist for the American Academy of Arts and Letters Richard Rogers Prize and, when read at Village Theatre’s Annual Festival of New Musicals in 2009, received a standing ovation. Take Me America sets the bar for what’s sure to be a hit-and-miss year, both in the political theatre and on stage. MARK BAUMGARTEN