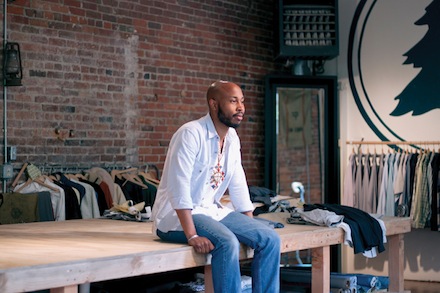 Maikoiyo Alley-Barnes is creative director of pun(c)tuation gallery, co-founder of clothing company Tarboo and an engaging presence who can talk with authority about politics or Zac Posen. This spellbinding personality is one of Seattle’s sharpest wits (and dressers).

City Arts: How do you define style?

Maikoiyo Alley-Barnes I think the word “style” is misnomeric at best. It’s too fluid to define, but it’s several things to me: personal, varied, intangible. I don’t think style has much to do with what a person is wearing. It does, however, have everything to do with how a person interacts with the world around them.

Tell us about your work costuming with Shabazz Palaces.

MAB I do not make costumes, Shabazz Palaces do not wear costumes. We collectively believe in the sacred history of adornment. The distinction may seem minor but it is important: Costumes obscure or mimic. Adornment accentuates, embellishes and perpetuates.

In our ancestral cultures, ritual and incantation held a certain lofty place and varied artisans, sorcerers, musicians, dancers, shaman participated in these undertakings. I have been honored to be involved in the visual language of Shabazz Palaces, including (though not limited to) film, head-mounted super structure and, more recently, textiles.

You’ve said before that everything you do is post-consumer in nature. Does this apply to your fashion sense?

MAB Not completely. Some of my clothing was made with my hands or hands of people that I know. If you see it on my back, 95 percent of the time it’s had a history. There’s something about [older] things that have been imbued with energy or narratives. Sometimes you’re aware of those narratives and sometimes you have to put it on and use your imagination.

Anybody who spends time looking for old things develops a kind of relationship with finding them, like they have a built-in homing beacon or something. Some people call it an “eye,” but I think it’s more like a sixth or seventh sense.

What items are special to you right now?

MAB A lot of things I’ve inherited from my father, who is very adamant about having things he really enjoys and, in some cases, having things made for him. Some I don’t necessarily wear because I haven’t, as far as I’m concerned, the appropriate demeanor to pull them off.

I’m really fond of the things my partner Matt Noren and I are making for Tarboo because they’re really classic and super functional. I’m really fond of my moccasin collection. I like things people have made with their hands and are obviously rendered that way.

There are some exceptions. I have old Converse Dr. J’s from the early ‘70s that just feel great on my feet, or an old French rucksack that works really well. There are several good pairs of broken-in denim. An old, silver-coated elephant hair bracelet—there’s the perfect thing. It has left my possession and come back to me three times. I got it from my father when I was probably three years old. The beauty of its design is the way that it was woven can be opened up and closed. Really functional. Really simple. Decidedly sentimental. Really aesthetically pleasing too—kind of minimalist, and still makes a certain impression.