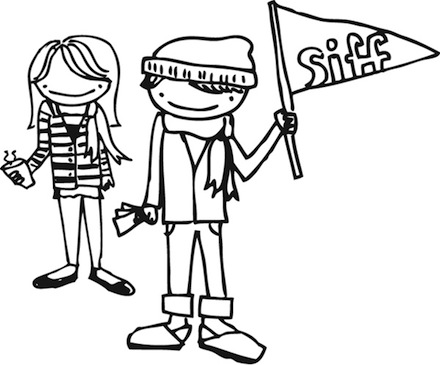 In the world of independent cinema, the audience is king. For many films, the right response from a festival audience can mean the difference between an obscure arthouse video release and a slightly less obscure cable release. This year’s Seattle International Film Festival (aka SIFF, pronounced “sheaf”) promises once again to bring the mumbliest, blurriest, subtitle-y-est of global indie film right to our immaculately groomed front yard. So dust off your crown, hop on that high horse and get ready to tour your royal domain!

Attitude prep
Before jumping in, scan your festival guide and cross off all the films made in the U.S.; there are generally no standout American indie films. If there does happen to be one, you can join with your fellow cinephiles in blithely accusing the filmmaker of cribbing from an obscure foreign director. You can make up names here—the onus to comprehend is on the listener, which is true of most conversations about film. A good start usually sounds something like this: “Well, obviously everyone loved that Mike Tractor piece; it’s basically a ham-fisted remake of an early Gämmerdellen film.” A note of caution here, though: Do not try to make up an Asian name if you are not Asian. You will sound racist.

Arrive in style
Ordinarily, film festivals are held in glamorous locations that have perfect weather year-round. Los Angeles, for example, or Toronto. These are the places to really show off your grasp of the latest fashion trends. You can’t go wrong this year with a plunging V-neck top under a cardigan sweater, leggings and some sensible flats. The same goes for the ladies. SIFF, however, happens in the middle of Seattle’s springtime, so be sure to overdress to impress and don’t be afraid to bulk up. Go ahead and pack that extra poncho and Sherpa hat you got at Hempfest, as well as a few personal storage options. One fanny pack won’t be nearly enough room for your festival guide, phone, camera, water bottle, travel mug, extra socks, tissues, hard candy, Luna Bars and pepper spray for the more popular venues. Better to bring an extra backpack or duffel for the heavier sweater, leg warmers, scrapbook, ferret, headphones, soup canteen, prescription bottles and bike chain repair kit. You can always use the dark theatre for cover when you need to shed some extra cargo. In any case, it’s best to keep in mind the famous Boy Scout motto: Always Be Ready For Anything, Okay?

Star search
You will see famous people. They’ll be the ones who are, well, famous. Trust me, you can just tell. Look for the obligatory red carpet (make sure to walk around it, not on it, especially if you’re a local filmmaker) and large banners sporting exotic logos for telecoms and energy drinks. You might think celebs would be hanging out in these areas—some of them are, at least the ones in the Hanford/Mitchell/Kusakabe star bracket—but don’t be distracted by the small game. As a very drunk and close-talking Diane Ladd once said, “Honey, where lies the free food and booze, so also goes the talent. Hey, there’s Mike Leigh.” So, head straight for the grub. As big as he may become, an actor’s innate fear of not being able to afford his next meal draws him to the catering table like a pigeon following a second grade field trip out of the popcorn factory. This strategy has two perks:

1. Stars are generally unfamiliar with Seattle, and therefore have nowhere to run if you spook them. Try herding them toward a Starbucks or into a nearby stand of dense shrubbery.

2. If you miss your chance, hey—free food. Act like you belong there and commence with the grazing.

Enjoying the show
Once inside the theater, your job is easy. Just sit back, relax and make sure every single person within earshot knows how dedicated you are to film appreciation. You don’t even need a companion for this. Dial up (or just pretend to!) your best film buff buddy while you’re waiting for the opening credits. Loudly and clearly fill them in on where you are, what you’re seeing, the film’s entire synopsis (recited verbatim from the program), how long you waited in line, what the lobby smelled like, how the weather has affected your sciatica and how you hope it’s not a long movie because staying seated too long triggers your “spells,” etc. Don’t be surprised if you attract the envious attention of a fellow moviegoer or three who overhear your insightful musings and want to join the fun. Unless they are famous, ignore them with extreme prejudice.

Thank you and good night
After you’ve dominated the director/writer/producer Q&A with your suggestions for improving the film, it’s time to mingle. The rule of thumb in Seattle’s echelon of higher culture is that once you hear the word “after-party,” it’s an indicator that the after-party has been changed, moved or canceled. Not to worry, though, there’s most likely still plenty of free food and wine in the lobby. The caterers may look like they’re wrapping things up, but don’t be fooled by their attempts at a hasty exit. Washington law requires them to remain at the venue until all of the guests have left. I’m serious, look it up.

With your legal bases covered, then, find someone who looks important— the director, a crew member, publicist, festival staffer or valet—and just start talking (see above for suggested topics). This tactic is known as “The Filmibuster.” A little-known Hollywood secret is that it’s very, very bad form to interrupt a Filmibuster in progress. Don’t believe me? Ask Summer School star Mark Harmon, who was up for the buddy lead in the second and fourth Die Hard movies until he blundered into a Filmibuster between Jeffrey Katzenberg and Michael Bay. Yippie-ki-yay, Mark Harmon, have fun on NCIS! By executing a Filmibuster correctly, you could find yourself nicely perched in a socio-cinematic safe zone, chatting up your new best friend in the empty lobby while eating free, room-temperature apps and getting looped on screw-top Chardonnay, and no one can touch you. Welcome to the big time!

SIFF only comes once a year, so be sure to get out there and get your film on. Just don’t talk too much about Gämmerdellen. He’s old news by now.

Basil Harris is a longtime local stage and film actor who co-starred with Sean Nelson in 2008’s My Effortless Brilliance, a feature film by Seattle writer/director Lynn Shelton.