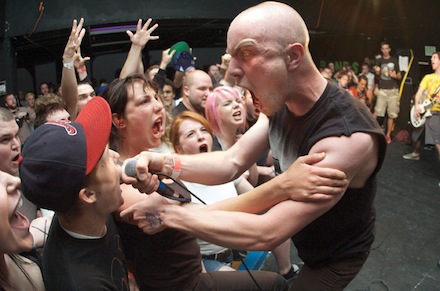 “The Rain Fest guys just reached out to me. They had been doing a hardcore music festival down in Tacoma at a place called the Viaduct, which closed last year, and they said they would like to bring it to Seattle. It’s on the same weekend as Sasquatch!, which is not the easiest weekend to do stuff. We’ve done a lot of surprise shows; like, Wolf Parade would play one day at Sasquatch! and then come play us the next, but it’s always a bunch of work. Plus, I’m an old hardcore kid from back in the ‘80s and ‘90s and I was just like, yeah, this thing will kill at Neumos. It sold out in less than a week. Super fast. They’ve spent a number of years and a lot of work building it up down in Tacoma. Each year it’s gotten bigger and better and it keeps growing. That’s what happens when you do festivals right; they keep growing.”

Neumos owner Steven Severin, who will attend the first night of the Memorial Day Weekend hardcore festival before heading to the Gorge Amphitheatre to see old friends at Sasquatch!