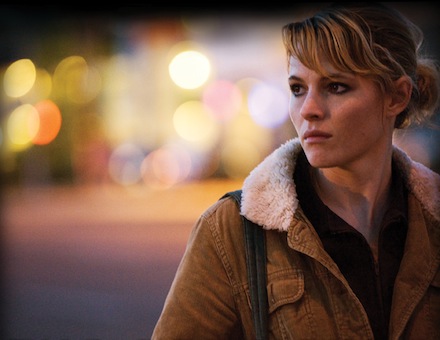 Q&A with The Off Hours’ Megan Griffiths

Megan Griffiths wrote and directed The Off Hours, a feature film shot in Seattle last year and premiered at Sundance in February. Starring indie It girl Amy Seimetz, it tells the story of Francine, a small-town waitress trying to escape her mundane life. Francine is adrift among disposable relationships when a trucker passes through and inspires her to change. City Arts caught up with Griffiths to talk about the movie and its upcoming Seattle debut at SIFF.

Where did the inspiration for this story come from? I worked the night shift for a few months, alongside several people who had been doing it for years—like 15 and 20 years. You don’t have a lot of interaction with people when you’re sleeping during the day and getting up when everyone else goes to sleep. It felt like such a lonely existence. And that got me thinking about what would happen if you worked that shift for that long—what it does to your hopes and dreams.

You worked on The Off Hours for seven years. What actually went on during that time? I worked on the script for three or four years. Then my producers and I got together in 2006 and had a kickoff party for our fundraising in January 2007. We thought we were going to shoot the movie that year, but that was a terrible year for the economy. So we were banging our heads against a brick wall, trying to find ways to fund the film. We had to stop and take jobs—because you can’t spend all your time working on a film indefinitely. Then someone optioned the project, and that didn’t work either.

At the beginning of 2010, we were like, “Let’s try and make the film with whatever we can pull together. We have a lot of resources at our disposal, we have a lot of friends, and the community is incredibly supportive.” We set a date—it was my birthday—and everything fell into place. I don’t think I could have made the movie anywhere but Seattle because so many people came out of the woodwork to support us.

How has the Seattle film community influenced your work? I love Seattle. The weather and the mood of the city inspire me because it’s really saturated with rain. Over the years, I’ve seen so many parts of town with so much character. I interspersed them all over the film to have the location function as a character as much as any of the actors.

I was struck by the familiar natural light in the movie. I really didn’t want to shoot the movie in the summer because right around the end of May, Seattle becomes a completely different place. It becomes this beautiful, hopeful world. And I didn’t want that happy, hopeful energy in the film because it’s not about people who are having that experience. It’s about people who have been beaten down.

How did you go about balancing so much mood and style with such a spare script? Some would say it’s not a smart choice, but I appreciate films that take their time. When I watch a film, I want to get to know the people in it. During pre-production, the costume designer, the production designer and I chose a color for each character and those colors are reflected in their wardrobes, their homes, their props. It’s pervasive. On-set, I was working with the actors to get the performances I wanted. And in the editing room, I had to figure out the balance.

Amy Seimetz locks you in during the film’s first few shots. I like to think the opening sequence sets you up for the movie you’re watching. That scene wasn’t the scripted opening; it was like scene 56 or something. That shot of the waitress at the nearly empty diner watching traffic go by outside just seemed to represent the themes of the story so perfectly.

So you’ve been on the festival circuit for the last few months, and you’re going to be on it for awhile. What are you looking forward to about coming home and doing SIFF? If you watch the credits of The Off Hours, it’ll take you five minutes because they’re really long, because so many people contributed over the years, at one point or another. A trucking company donated rigs to us. An ambulance driver donated his ambulance for a night. Probably 80 percent of the people who contributed haven’t seen the movie yet, so I’m super excited to have it screened in Seattle. I just want to bring it home.