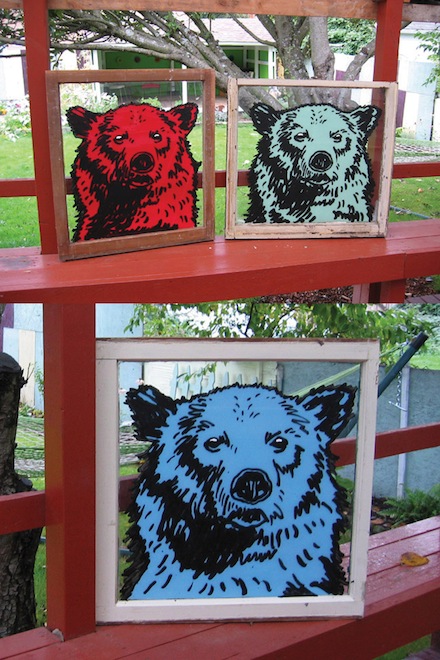 Since reopening two years ago, the Crocodile has been home to a reverential collection of a longtime Northwest music legend, rock photographer Jini Dellaccio. Her black and white, medium-format photos of the Sonics, the Wailers and Merrilee Rush created a hallowed atmosphere that helped the remodeled Belltown club remind patrons of its Northwest roots.

Last month, in honor of the club’s second birthday, Dellaccio’s collection finally came down and, in its place, something completely different went up: the work of Derek Erdman, an artist who has called Seattle home for only six months and whose work is anything but reverential. The title of the show alone suggests a more unwieldy assortment of art that will surround music fans in the main room for the next year: “The Alligator, The Crocodile, Laughs, Lies & Some Great Things of the State of Washington: The Art of Derek Erdman.” The art itself—which features skewed depictions of Northwest icons (Steve Pool!), non sequitur pop culture figures and lots of musicians who have played the venue rendered in Erdman’s trademark Magic Marker color palette—back up the title convincingly.

“People take things very seriously,” Erdman recently said, while working on a painting of Milwaukee pitching great Rollie Fingers in a Mariners uniform for the show. “It’s not necessary. I certainly don’t want to say that people should see things my way because if people feel they have an urge to create, they should. But it seems to me that painting does not have a sense of humor at all. Whereas music does. There are a lot of joke bands; people can take things lighter.”

The Crocodile show is the latest in a full-on Erdman assault of the 37-year-old’s new home. Since his first Seattle art show, held at the Anne Bonny four years ago while Erdman was still living on the south side of Chicago, his prankster sensibility has become part of Seattle’s cultural landscape. His clip art-inspired pop art lines the walls of Radar Hair and Records in SoDo, his character Rap Master Maurice—who will leave battle raps on your enemy’s voicemail for a price—is a favorite with the audience for KIRO-produced podcast “Too Beautiful to Live,” his two covers and feature art for The Stranger have been much-discussed, and his regular column on the weekly paper’s music blog, LineOut, is some of the most entertaining and heartfelt writing in town.

“He’s looking at this city through new eyes,” Harrop said. “We thought it would be a good contrast; his stuff is really lively. It’s going to change the way the room feels. We’re not going to remodel the space, obviously, and we’re not changing the room, but this is definitely going to change the feel of the room and we are looking forward to that for sure.”