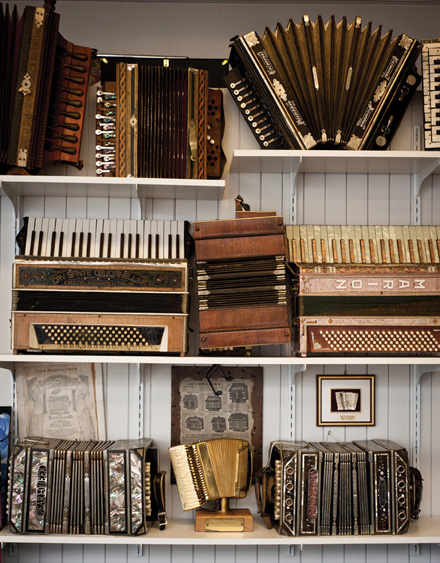 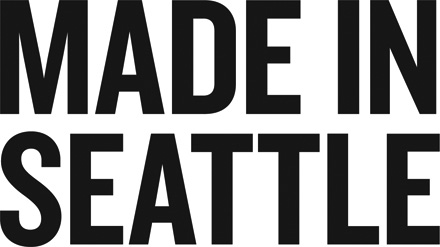 A look at inspiration in three unlikely workshops

Seattle, home to dubious firsts and out-there inventions. The covered shopping mall, the smiley face, the Space Needle, the $4 cup of coffee: It takes a certain extravagance of imagination to devise the weird and grandiose things that seep into Seattle’s roots. A $20,000 accordion, for instance, might seem unwise, but only here could such an enterprise thrive. Seattle fosters the kinds of creators who see a niche where none exists—and fill it.

Take the three workshops profiled below. Each is helmed by a particular brand of nerd, the earnest, eccentric, ridiculously skilled kind, the kind that rightfully earns the title “Made in Seattle.” 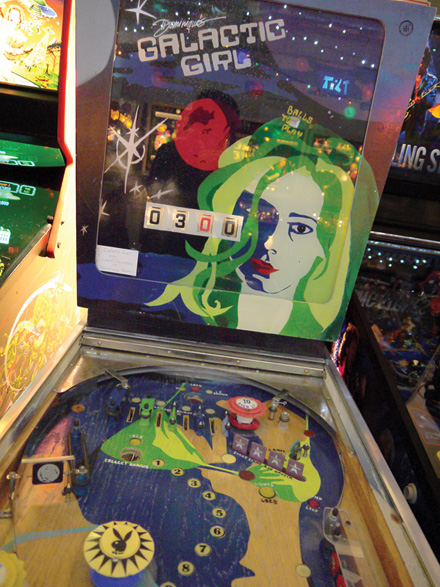 Dominique John, owner of the Silver Age Silver Ball pinball shop, walks delicately through his Columbia City basement. He steps over drum sets, reel-to-reels, car alarms, framed pieces of his collage art and other hand-me-down junk. The only tidy thing here is a stack of bubblegum boxes against the wall. “Those are full of pinball parts,” the lanky 46-year-old says as he opens a suitcase, inside of which is a blue siren light and 18 red switches connected to a speaker—his latest homemade musical instrument.

Then he tells me to look up. The basement ceiling is covered in pinball circuit boards.

“I don’t seem to be able to do just one thing,” he says. “I always like to be learning something.” Pinball is his most consistent gig, dating back to his childhood days of making functional cardboard pinball machines. After moving to Seattle in 1988, John trained in welding and machining between odd jobs and bands.

“Pinball games seemed like magic in the box, all sealed up,” he says. “But if you open it, oh, there’s springs and levers, and all of the switching is mechanical! I could understand that. Switching is just logic. An epic sudoku puzzle.”

In 1997, he began buying cheap pinball tables, repairing them and operating them across Seattle. Over time, he tried making his own table, which collected dust in his basement until he decided its day had come. “I went downstairs with the idea that I was going to part it up—get rid of it. I’m looking at it, and looking at it, and I can’t do it,” he recalls with the look of a satisfied addict on his face. “Well, let’s just see how it flips.”

That’s “flips,” as in, finding out whether it plays well. Ten-plus years after he began construction, his completed table, dubbed Galactic Girl, is now the centerpiece of the Seattle Pinball Museum in the International District. It plays spectacularly for a home-brew machine. I try to get him to talk about it as he repairs other museum machines (he’s the museum’s primary tech), but his mind’s careening like a pinball.

“That’s my life! Everybody’s life should be doing what they want to do. What I want to do changes.” He checks the power on a pinball machine. “It shifts all the time. That’s what I do, what I want.”

The Petosa Accordion Museum is essentially two walls covered with the instruments—classic accordions, including what owner Joe Petosa Jr. calls the “original” accordion, manufactured in Italy in 1828.

“These four here, my grandfather made in Seattle,” he adds. They’re beauties: originals from the ’30s and ’40s that, though faded, still have black mahogany boxes. Could he pick up any of these and play them? “Sure,” he says, adding that he performed for 15 years professionally. But he leaves them on the shelf unplayed.

Fair enough. Petosa is the name for American accordions, the only accordion manufacturer left in the U.S. When you’re ready to spend $20,000 on a custom-made accordion, you come here. The 89-year-old University District shop produces only two high-end units a year, with the rest of its energy divided between repairing used accordions and running a small factory in Italy. Petosa is serious in business and demeanor; he’s not about to burst into a polka just because I ask him to.

“You have to love the instrument to stay in this business,” Petosa says. “It takes longer to learn how to make accordions than to become a brain surgeon, and the pay isn’t nearly as … ” He laughs instead of finishing. His workshop is filled with accordion parts, each hand carved of high-end wood. These interlocking parts—free of plastic or metal—are what make his custom-made wares so expensive.

“True accordionists” are his intended audience, he insists, and he has enough of them to keep his shop in the black. “Don’t ask us how much it costs, okay? Just ask us how good it is.”

Petosa says he’s groomed his children to become fourth-generation members of the business, and he’s optimistic about remaining relevant for a new generation of music lovers attracted to acoustic sounds.

“A new customer just received his,” he says. “He’s in his mid-30s, and he played it for six hours straight, didn’t put it down.” 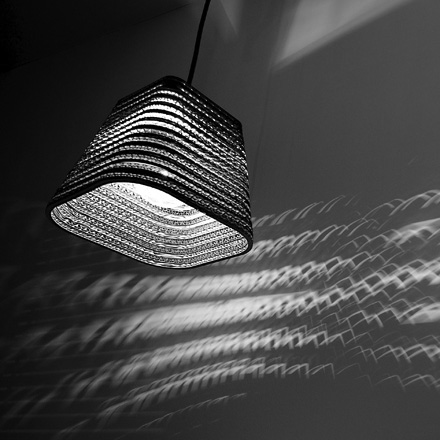 Furniture designer and Graypants Studio co-founder Seth Grizzle walks through his sunny Capitol Hill office space, past stacks of plywood sheets and bundles of colorful burlap taken from neighboring coffee shop Caffé Vita. His partner and co-founder, Jonathan Junker, points at a new ceiling light he recently made out of sheets of cut aluminum:  When the light’s on, rings and pixels appear on the ceiling.

Grizzle gestures past the small staff working in the cramped lobby toward two back rooms, as if they’re more important, announcing, “This is the living zone!”

What he means is, he lives here. So does Junker. Their two tidy bedrooms are dotted with guitars, art and Graypants’ signature furniture experiments: chairs and lighting fixtures made from found, recycled materials.

Graypants isn’t just making the most of recycled aluminum, cardboard and plywood. Having the owners’ bedrooms at the office also supports their credo of “responsible” production. The 29-year-olds have been roommates since attending Ohio’s Kent State University, where they shared architecture classes and afterwards goaded each other into giving Seattle a shot.

Once here, they took day jobs at architecture firms and converted their first two-bedroom apartment into a studio where they spent their nights pushing each other to make crazier things (and testing their neighbors’ patience). “In our bathroom, I built a little plastic bubble,” Grizzle says. He taped himself into it to dampen the sounds of sawing scrap cardboard and newspapers at night. “We didn’t have money for studio space, for shop space or for materials,” he says, and Junker interrupts: “So it seemed like a natural direction to make things out of trash in our apartment.”

The duo incorporated as Graypants three years ago after accidentally striking gold. At a design competition for “sustainable” chairs, they made last-minute light fixtures out of cardboard as accent pieces for their chairs. The fixtures turned out to be the hit, thanks to the intense textures hidden within the corrugated cardboard, full of woven, symmetrical lines. A few design fairs and blog raves later, they were able to quit their day jobs and start a fixture and chair business.

“The best compliment we get is when people don’t know they’re cardboard,” Grizzle says. “They think it’s wood or a different texture. Cardboard has a stigma that makes it sound cheap. Our challenge is to make it elegant—make it unknown and mysterious.”

On the strength of rising sales, consultation gigs and custom installation jobs, the Graypants pair is working on a series of secret experiments with new materials, each elegant and enticing. Such promising results make the company’s humble, “guerrilla” beginnings even more ironic, as the earliest days meant swiping cardboard from dumpsters and sneaking into schools to use expensive equipment.

“We’d walk down the street carrying huge stacks of boxes,” Grizzle says, “and people would be, like, ‘those guys are crazy.’” Again Junker finishes his friend’s thought: “And they’re probably right.” •