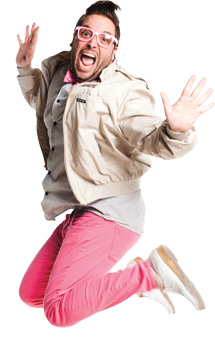 Chase Jarvis is an inspiring fellow. The big-time Seattle photographer responsible for the Best Camera movement, which preaches the gospel that it is not your equipment  but how you use it that counts, is all about moving power into the hands of the powerless. It was in that spirit that Jarvis released his Seattle 100 project this past fall featuring photographs of one hundred people Jarvis viewed as the primary movers and shakers in Seattle. Jarvis also implored anyone who would listen to make their own lists with their own damn rules and take their own damn photos – or draw sketches or paint paintings or tell stories – of the people who were creating the world around them.

The idea is to define and honor your culture while also attempting to define yourself as a part of that culture. Basically, it’s networking by the most artistic means possible.

It’s a fantastic idea and one that I decided we needed to do for you, our readers, and for ourselves, so we can better understand exactly what our culture is. And what better time to do it than in January, a time of renewal and redefinition? We wanted to honor those who have impressed us in the only way we know how; by writing one-hundred-word blurbs about them.

On page 20 of this issue of City Arts you will find our first attempt to truly define our culture. Our rules are different from Jarvis’s; our list is likely different from yours. And you will probably view some of our picks as bizarre, or as so obvious as to send your eyes skyward. And you might think you deserve to be on this list. If so, take a cue from Chase Jarvis. Impress us.