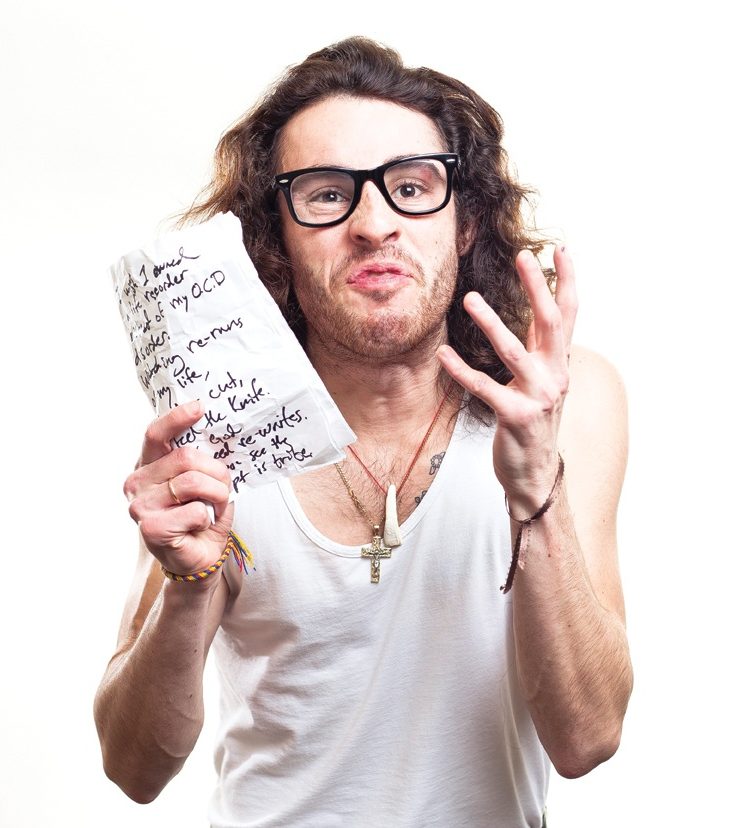 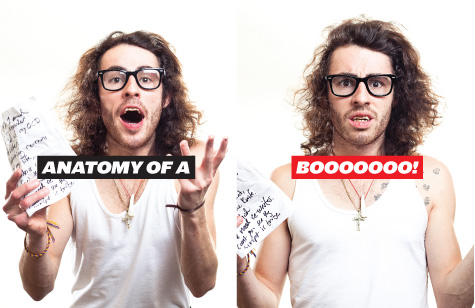 For three and a half hours, poets and hiphop emcees had taken the stage at Washington Hall as a part of the first-ever Hip-Hop and Poetry Church, a gathering of lyricists meant to bridge the divide between the literary and concert crowds. Tears fell when Macklemore recited a eulogy he had written for a good friend who died too young. Cheers rose up as Larry Mizell Jr. professed his love for his Seattle home in verse. The crowd laughed at a bit of prose read by Eileen Myles that recalled the curious life of a poet. And their eyes widened as poet Karen Finneyfrock took on the role of Saul’s wife and disparaged her husband for his pettiness and fear. For most performances the audience rose to its feet in applause.

“I was on a judging panel at the Stranger’s Gong Show in 2009. There were four of us judging – all women for the first time – and two of us were totally wasted and gonging everyone before they could even perform. We were in close quarters at Chop Suey, and the audience turned on us, booed us and threw bottles at our heads. I ducked and tried to wrangle the gong mallet from the hands of the offenders but was not successful. My favorite moment was when one of the drunk judges said to me, as i was trying to hide the mallet from her, ‘Hey! You’re not my mother!’ I sat there for two hours and dealt with people screaming at us that we were hateful bitches who needed to be killed and
avoiding being hit by flying trash. Love it when a crowd turns.”

The Trap
BRENT AMAKER OF THE RODEO

“A couple of years ago we played a maximum-security prison in Antwerp, Belgium, and when it started out, it seemed like the prisoners were diggin’ us. Then half of them started booing, and they were shouting ‘Fuck America!’ at us during our set. it was a little intimidating because we were standing face-to-face with these hardened criminals, there wasn’t anything between us, except there were guards in the room with weapons, but it still was kind of weird to be booed by prisoners. There was part of me that wanted to get out of there when it was tense, but at the same time, you’re not going to walk off that stage; that’s an incredible experience. The fact that they were prisoners made it a lot more tense than if they were just fans, because, you know, for regular fans, booing is about all they are going to do. After we finished that set, there was trouble at the back of the room. One of the guards came backstage and said, ‘Hey we’ve got to get this stuff under control, can you play one more song?’ So we played a forced encore to prisoners who were being restrained. After they booed us off stage, the well-behaved prisoners had to serve us dinner in the warden’s cafeteria, and so we were eating this nice steak dinner that the prisoners were serving us. So that was interesting.”

“There was a concert with Jesse Bernstein at the Graven image Gallery, and, in all likelihood, Kurt Cobain was there. He would have been seventeen at the time. But at this particular show, Jesse was booed while he was doing his poetry thing, because that’s what the young punks thought they were supposed to do. And what he said was, ‘The next person who boos…’ and he pulled a switchblade out and he pulled his penis out and he put the switchblade right at the top of his penis, and he had the most ugly-looking gnarly penis you’ve ever seen, and he put the switchblade right back and said, ‘The next person who boos or leaves, i’m cuttin’ it off .’ Of course what happened in that era was that people left and they booed. Now, obviously he didn’t cut his penis off. He nicked it a bit, which was one of the grosser things you’ve ever seen at a concert; then what he said was, ‘The next person who boos or leaves, i will stab.’ Now that stopped people from leaving and booing. That was certainly an exceptional concert, but it’s poetry and art and all the other wacky stuff.”

“I went to see a Jim Carroll, Patti Smith and Lenny Kaye bill, which was fantastic. A few poets opened the show, including this guy who was, to my mind, trying to be ‘out there,’ reading beat-type stuff , in that William-Burroughs-slash-Jesse-Bernstein vein, but he wasn’t good. Blue and sexual and violent with nothing holding it up underneath – it wasn’t shocking, just dumb and boring, plus it went on and on. I, like most people, tried at first to make sense of him in my head, but then the truth set us free. People started booing and yelling at him, but he wouldn’t stop – he seemed to think that booing was a sign of approval, of coolness, of ‘I’m really pushing buttons, man!’ Uh, wrong, dude.”

Then, near the end of the marathon event that consumed a Saturday afternoon in October as part of Heineken City Arts Fest, Buffalo Madonna, an emcee for local hip-hop trio Mad Rad known to his optometrist as Nate Quiroga, took the stage. He knelt in front of the podium and set a stack of papers on the floor before him. “If anyone is videotaping this,” he said, “I just want you to know that the lover I am talking about here is a lover before the one I have now.”

Chuckles bubbled up as he focused on the sheet of paper in front of him. Meanwhile, Storme Webber, an older, established poet, sat in the back of the room, a staff in her hand and a twist of hair piled on top of her head. Earlier, she had stood at the same podium where Buffalo Madonna was now preparing to speak. Enraged by the recent shooting of a Native American man named John T. Williams, she had recited a poem calling on the community to stand up to the police; then she recited another piece, spiking her poetry by soulfully singing the word “blues.”

That was the last the audience heard from her until two minutes into Buffalo Madonna’s recitation. In the middle of the poem, a challenging piece that sought to equate abusing a prostitute with abusing the good will of God, the artist repeated the line “fuck the whore” as though it were an incantation. A few people quietly shuffled out in protest before Webber let out that long, full-throated “boo!”

I turned in time to see her walking out the door. The remaining audience members, their heads turned, seemed almost as shocked by Webber’s exclamation as by Buffalo Madonna’s blue poetry, which the performer, without skipping a beat, continued to recite onstage, now seeming a bit like the devil crashing the party.

It’s a position one would expect Buffalo Madonna to be comfortable with. He is, after all, a member of the most notorious music act in town, Mad Rad, which is known as much for being banned from local clubs for questionable behavior as for its incendiary, and at times brilliant, hip-hop. Still, Quiroga claims that he has never been booed.

Sitting at a bar before a Mad Rad show just a week later, the bespectacled artist made clear that he had been thinking about that moment a lot. His verdict: booing is good.

“We’ve elevated the stage so that the performer’s this icon,” he said between sips of whiskey. “You need to sit down and you need to be quiet and you need to cross your legs and you need to clap. We’ve dehumanized the audience. There’s no blood in them anymore. Back in the old times it was the working class, this was for them. They’d be throwing things, they’d be yelling, screaming, and there was a conversation. And if I can just bring that conversation closer to happening, I’m happy.”

As in Seattle sports, where Mariners security has been known to eject boo birds, vocalized disapproval is not prevalent in Seattle arts. Audience interaction is mostly made up of approval, and lots of it.

“Booing in Seattle is so rare,” said Nancy Guppy, host of KCTS’s Art Zone and a longtime arts patron. “Everything seems to get an often undeserved standing ovation.”

That sentiment was repeated by a number of local performers and critics contacted for this article. It wasn’t always that way, though. Charles Cross, the author, former editor of The Rocket and longtime concertgoer, recalled a time when booing was the norm.

“In the punk era in Seattle, booing, just like in London, where people spit on each other, happened at virtually every show,” he told me. “I mean, people booed the Jam during their first show in Seattle. Part of our problem with being in Seattle and being so isolated from the centers of culture of that era was that it was extreme. People were crazier about responding in a negative way than they would have been if they had ever been to London.”

As the twentieth century wore on, Seattle became a more connected and worldly place. When punk gave way to grunge, booing was frowned upon.

“There wasn’t cheering, there was no booing,” Cross added. “There was no response because that was considered uncool.”

Booing faded into near obscurity, but it still makes an appearance every once in a while, a seldom-used weapon in the dialogue between audience and performer that can mean a number of things.

But what is the audience really saying when it boos, and what, exactly, does the artist hear when he or she is booed? In an attempt to find out, I asked both Buffalo Madonna and Storme Webber to share their respective takes on what happened that day in October. Then I asked around for some more stories of displayed discontent. It’s hard to discern any single lesson from the tales I heard, but one thing is certain: nobody forgets a boo. • 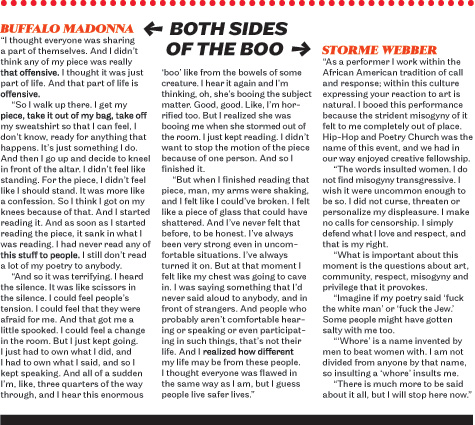