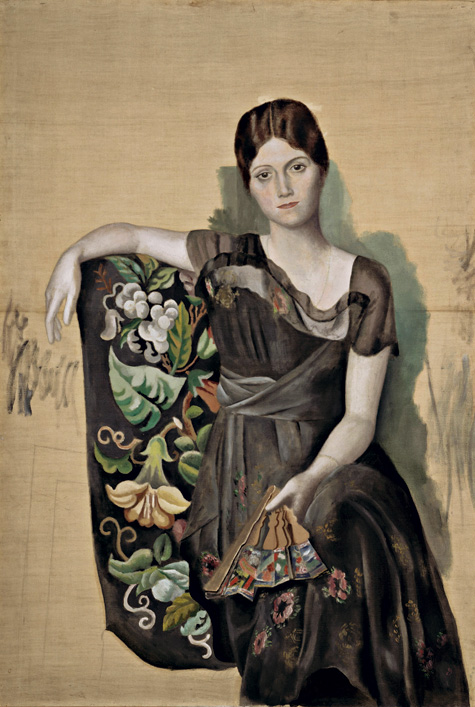 Picasso brings Seattle out of the dark and into the international spotlight.

Last October, for the first time in my life, I had a week of sunshine on a trip to Paris. But I was cold with fury. I had booked a beautiful room near the Musée National Picasso, in the town’s second-oldest house, built when they burnt Joan of Arc. And I got burnt: the Picasso Museum (as Americans call it) had gone dark, as theatre people say, having been closed for renovations until 2012. I thought of what the comic Michael O’Donoghue said in 1973 when he heard Picasso had died: “Oh, I guess he’s entered his Black Period.”

Portrait of Olga in an armchair (detail), 1918, Courtesy of Musée National Picasso, Paris

I had fled Seattle partly because everybody here has been in a Black Period since 2008. The recession has cut a plague-like swath through the arts. Seattle Art Museum alone slashed wages and cut fifteen staff jobs. Screwed out of millions by banks and brokers, shocked museumgoers shied away from every SAM show except Michael Darling’s smash Kurt, the star curator’s final show before fleeing Seattle himself for a sensational job in Chicago and a huge raise. A year ago, nobody knew how SAM was going to replace the $5.8 million a year it lost in the WaMu debacle. Although Nordstrom is riding to the partial rescue, replacing WaMu as the museum’s tenant, two floors of the SAM tower remain scarily vacant, and SAM is borrowing up to $10 million from its endowment to cover its $60 million debt. WaMu cost SAM $25 million. All three SAM locations will close for two weeks in the dead of February 2011. Talk about dark.

A year later, times may still be tight, but things looked infinitely sunnier on my October 5 visit to SAM, the mood inside matching the brilliant Indian summer sky outside. The main reason: the Picasso Museum has basically relocated to Seattle for the thunderous blockbuster exhibition Picasso: Masterpieces from the Musée National Picasso, Paris. Until January, SAM, which in its early years would exhibit crude photo reproductions of famous masterpieces instead of the real thing, will show off about seventy-five paintings and sculptures and seventy-five prints, drawings and photographs from one of the planet’s most important collections. “So today – your collection,” said Picasso Museum curator Anne Baldassari at the press opening, which was mobbed.

The exhibition is not Picasso’s Greatest Hits; it consists of just enough to cover every single major style, theme and artistic medium he employed. It’s still more masterpieces than you’ll ever see in Seattle in your life, enough to justify seeing the show multiple times no matter how long the lines get. The show puts the works in context, so you grasp them more deeply than if you were simply scouting for hits. Baldassari, cocurator Chiyo Ishikawa of SAM and exhibition designer Michael McCafferty have done a brilliant job of making the master’s mind intelligible. This exhibit was my fifth encounter with the collection, and I saw things in it I’d never seen before, partly thanks to its refreshing reincarnation in Seattle. I’m glad I missed seeing it last fall in Paris. In some ways it looks better here (though when it reopens in 2012, I’ll be there).

The show boasts a zillion SAM events and spinoffs all over town (see NOW, p. 47), but for me the main event was a tour led by Baldassari. Despite a semi-comprehensible accent rich as ratatouille and thought processes as hard to follow as a flock of monarch butterflies, she had a gaggle of press hanging on her every syllable. Baldassari isn’t just the Musée Picasso director, she’s a world-class Picasso author, scholar and archivist. She’s particularly strong on the connection between Picasso and photography: nobody knows more about the artist’s trove of over seventeen thousand photos. Photos loom huge in this show. You won’t see Picasso’s most famous work, Guernica, which protests Hitler’s 1937 bombing of Spanish civilians, history’s first aerial massacre, but you will see studies for it and a wall full of eye-opening photos documenting how he painted it. I asked Baldassari for more details, and she said, “It’s a long story. Read my book.”

“More masterpieces than you’ll ever see in Seattle in your life.”

Baldassari had more to say about the photo Picasso probably snapped of his wife Olga in 1917, and the extremely famous 1918 painting he made from it, Portrait of Olga in an Armchair, both gloriously on view. “It was a bit perverse because the way he was involved in representation of the figure is through photography,” she said. “It’s through distortion, so it’s ultimately unreal.”

The photo, probably carefully staged, shows Olga sitting in a floral-patterned chair wearing a dress he bought for her on La Rambla in Barcelona (“a very romantic gift”) and holding a fan in her lap in a way that suggests the delta of Venus to me, and I’ll bet to Picasso too. “The dress is in the [Musée Paris] collection,” said Baldassari, though it’s too frail to travel. Next to Olga he placed the African fertility sculptures he had bought from Gertrude Stein (Baldassari found Stein’s letter to Picasso confirming the sale).

In the painting, Picasso erased everything but the outline of Olga and the part of the chair with the floral motif, which spelled sex to him. He did not include the fertility sculptures on the floor. Was this omission a superstitious attempt to cast a spell, to make Olga pregnant and protect their marriage and baby, by hiding the ancient African sacred objects visible in the photo? “Yes!” said Baldassari.

Picasso removed the room Olga posed in, replacing it with an abstract beige space, blank except for a few ghostly lines and a zigzag brushstroke. Weirdly, she casts a shadow on the empty background – a painted shadow not found in the photo. “The Olga portrait is a kind of Cubist cutout,” Baldassari explained. “It’s not just a painting, it’s an object.” He made Olga a sculpture – his own private fertility fetish. “The chair is a sculpture, the dress another sculpture moving on the body. The fan shifts from 2-D to 3-D.” It’s a faceted object, casting a shadow, dancing tantalizingly between sculpture and picture.

“It’s an intellectual game, a long time before the Surrealists,” said Baldassari. Picasso played for keeps, and so does this show. Immersing myself in his Cubist, Classical, Rose and Blue Periods, I snapped right out of my Black Period. Maybe we should all do so. True, in some ways it sucks to be us. The arts are hurting. But SAM has reclaimed our waterfront forever with the sculpture park, taken the Capitol Hill museum to new heights and just installed the best downtown SAM show I ever saw. We lost Michael Darling but retained Ishikawa, who’s an even more eloquent curator. Not everything sucks, not if you open your eyes and your mind. SAM will get through this bad patch. And if you catch Picasso in Seattle, you’ll always have a piece of Paris. •